While I was writing about TCS and its management, I remembered a conversation I had at Ren where I told him something that amused me about the market. I had been engaging in a campaign against another persons market in Molden Heath. I had been purposefully undercutting them to the best of my ability in such a way as to leave their over priced stock sitting for long periods of time. I'd been ruthless about it. Cutting my own margins back and filtering stock to the lowest price in the area. When they started to list under me, I had narrowed the margins so tightly that I was snapping up their items under Jita prices and relisting them at a profit to me. Only, I made sure to more the items from their system before relisting them. I was doing all of this just because I didn't approve of their pricing habits to their own corporation/alliance.

It was only after I was filtering through my stocking needs and took note of various undercut prices and felt a bit smug that I realized that market PvP is subtle but I was engaged in it, hip deep. 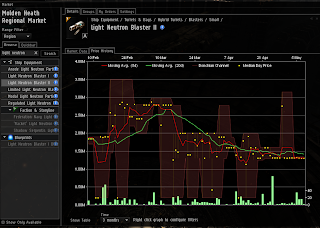 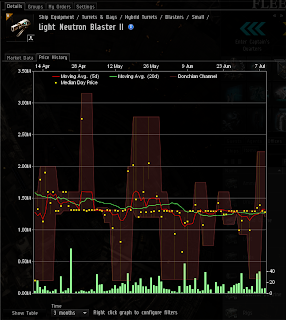 The two above graphs are for the same item. The top was back in May when I noticed TCS's market pressure. The bottom is the result of the pressure continuing. Almost every single low dip is me selling as prices dip in Jita and I claw prices down further in Molden Heath. 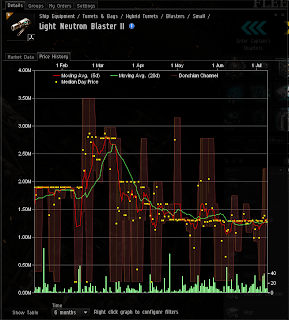 Market PvP is not flashy. Often the only people that know about it are those engaged in the actual struggle. Some observers may notice. Some scavengers may attempt to make a profit out of it. But it is a silent, slow and graceful fight. One composed of prices and pressure. Of decisions and assets. I didn't realize I'd be quite so cold and a bit vicious with the market.

When I started TCS I said that if anything else, I'd improve the area for the residents of Molden Heath. I said that I'd be fine with not making ISK if that was because people were undercutting me. I'd sit on my stock and use it as a pressure point to bring prices down instead of undercutting to fill my wallet.

The philosophy appears to be working. The market is maintaining and it is maintaining itself. I continue to have a solid daily turnover of items. I've settled into my relationship with Sard. Things seem to be going well.