Spotting the Yarrbear in the Wild

Piracy brings forth images of the unsavory, free spirited, law scoffing rogue stalking the well to do for gain. Whatever the reasons the pirates may have to shun normal methods of wealth accumulation and take it by force, that accumulation of wealth is their focus. As their ships dip through the dark blue waters of the ocean or skim across the sparkling blue nebulas, they are out hunting for targets. 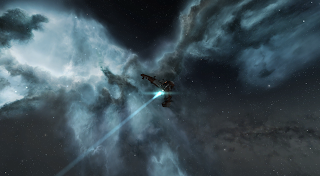 Or, that is how it seems it should be. The reality for a pilot, seeking a life of piracy is less spectacular. The chances are high that they will be hauled into the station and sat down with an older (possibly) more respected member of the corporation and their expenses discussed. A budget might be formed, various investment opportunities discussed, and aptitudes for certain activities divulged in an effort to fund their piracy.

Eve lives in the land of reverse. Pirates pay to pirate instead of pirating for their pay. Ammunition is expensive. Lasers break. Spaceships explode. Whatever the reason, the novice pilot is quietly led into the path of understanding that they should not depend on their conquests financing their future. It can be done but the opportunities are not constant and the attrition of loss consumes the stores. The pirate that wishes to live upon piracy will have many lean times. That may harden him into a vicious, focused machine of pewpew but it also brings with it many stresses.

But there is a subspecies of pirate, one that fits into the rest of the fleet, but is a bit different. That subspecies is known as the yarrbear. Many, many pirates are yarrbears butt hey disguise it through their flow of antimatter and searing flares of scorch fused lasers. With similar markings to pirates yarrbears are often subtly different. They are not as lean. Their ships may have a tendency to glitter brighter under the sparkly of the systems star.

Some signs are more clean than others. In the wild the yarrbear will scan down complexes and 'do them' to lure people in to kill. The yarrbear however will often become overwhelmed by the possibility of ISK opportunity and find themselves consuming the plex and growling over the scattered wreckage as they frantically dig for dead space loot.  The yarrbear will have a hauler that can appear and scoup wreckage or snatch up vulnerable modules. Not every high spot is equipped with death and often, after a fight, the bright blue beam of a salvaging unit will unfurl upon T2 wreckage.

This is a story about one such.

I wound up joining a fleet tonight. I was blissful in my indulgence of my upcoming weekend off. While tending the empty shelves of the Cougar Store I heard mutterings of Oracles and interceptors. I stopped to randomly start bitching about Oracles. I do not yet have T2 large lasers and I make sure to complain about the fact that ever since I learned T2 projectiles everyone has been using lasers.

And I found myself jumping into an empty clone and shipping into my Ares as the fleet headed off to null. While puzzled, I was enthusiastic.  A fleet was just what I needed to start the weekend. I was tired and my reactions not on par but whatever, fleet, yay! Off we went and things were fine. We killed a Viator and its pod. A two billion ISK pod. With ISK efficiency officially accomplished everything else was just roaming.

We found a station and we found a Vagabond. In the struggle a loyal, heroic Ares fell in battle. But, the Vagabond's life was also extinguished! And that is when the bear kicked into the yarr. Actually... wait... no it wasn't....

You see, before that, we were passing through Sov null and a greater Yarrbear in fleeet than I saw that the Territorial Claim Units (TCU) in that system were unanchored. His eyes glittered in greed and his personality suddenly fragmented. Gone was the cold, steely eyed pirate who sought only the thick meal of death. In his place, the yarbear shrugged out of his skin and greedily sent minions to scoop up the unguarded puddles of ISK that the TCUs represented (89 million ISK a piece).

But later... yes later... this Vagabond wreck sat in space and I tried to salvage it. The change was sudden and it was initiated by other members of the fleet. Oh, they wish to hide their own furr but it was there and I found the change rippled across me as my interceptor frantically gnawed away at the wreck. Only, I was sent off to find something else and someone tried to pop the wreck. My wails of horror stunned them long enough for me to return and reclaim my prize. My reward was a puddle of T2 salvage. Not much but more than I had before.

My hunger satiated, the fleet slunk deeper into null sec. Our efforts to find targets had failed. We crept into darkness and our scout found himself caught in a bubble with a Absolution landing on grid with him. He did what any interceptor would do and pointed the Absolution who tried to run away. That failed. Having three interceptors in the fleet didn't work out for him. We pointed him and he died and behind he left a delicious carcass.

I pounced upon it in a frenzy. My fleet commander, tolerantly, told me that I had as long as it took to burn down the two bubbles. My efforts were frantic but they paid off. I salvaged the wreck as the second bubble came down and in triumph I lifted my gore soaked trophy over my head. 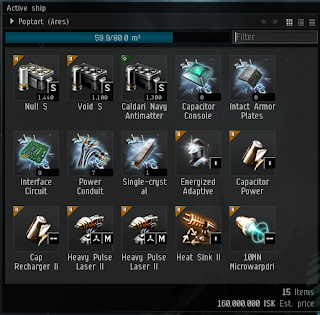 "I will make a lovely lossmail," I told the fleet as I tucked each bit away to a secure location about my ship. However, null sec was quiet and it was with glory and excitement that I docked in Bosena, in one piece, with my loot intact and my covetous greed fulfilled.

Sometimes, being a pirate does pay.

This post brought to life by hour twenty-one of being awake.
July 12, 2013