And All of Null

When Altaen asked (told) me to +1 for the fleet I was like... uhh... and realized that not only was I the only one in an interceptor for the fleet but I was no longer going to be able to convince Diz not to make me +1. No other interceptors had marked up for me to hide behind.

I flickered through excuses and possibilities to avoid the task. After another moment I decided to just roll with it. If I failed I'd be corrected. If I had questions I'd ask. And by now, I had a good idea of what I needed to do. It is probably time to polish some of the skills.

It still felt odd. I try to be quiet in fleets and do as I am told. Talking that much and relaying that much information was a bit uncomfortable. I am also bad at interrupting people who are talking. But, posting everything in fleet wasn't always working because not everyone reads fleet. An uncomfortable situation in the sense that it was unfamiliar and new. Somehow I managed to power through and jump into null.

And null sec was empty. Really, really empty. Our first goal was some thirty six jumps away. That wound up a bust. The second system was some thirty jumps from that. That also wasn't nearly as exciting as anticipated. For once, I had one of those empty null sec adventures I hear about. I felt privileged.

And for a dead roam where I killed nothing I still had an adventure!

I jumped into a bubbled gate. 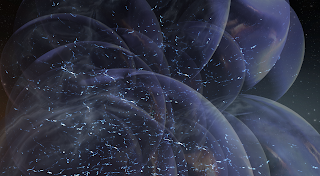 My mind spasemed. Ahhh. Bubbles! Death! Death! Death! Ahhhh!!!! Wait no ships on the overview... okay... uh...hmm. Were they all going to uncloak and kill me?  Uhh. I held cloak and told the fleet where I was and that the gate was bubbled all to hell.

I burned out of the bubbles and got my bearings and tried to find the few ships in space. They managed to go dock while I was trying to figure out what to do. From what I understand, this is a normal way to defend a gate. Okay. Well. After a few minutes we moved on towards our goal which was a system glowing warm and red full of people.

The out gate was also bubbled. 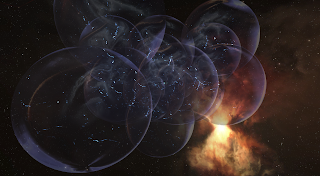 I rolled my eyes a bit and waded into it to reach the actual gate. Once through it was smooth sailing until we reached our end point system. With fifty people in local and 20 Mackinaw on scan it seemed like a good idea.  Seemed. Except nothing happened but a Bantam undocking and redocking over and over. I flew in circles until I was tired of flying in circles.  Finally, a Tornado is seen on scans.

"Dropping a random bubble in a random place," goes Silver who was out of position for anything. The Tornado warps in at 80k off and warps off before I even pick up speed. That was the last that we saw. It was also our second system and sixty some jumps through null and our total  action was a Tornado warping in and leaving immediately. 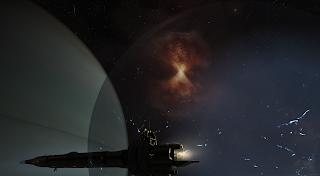 "What's up with that sparkling blue stuff?" my husband asked from across the room. I got a huge smile on my face and tried to explain, quickly and simply the bubble and how it affects warp. I then got left behind as the fleet headed home. The interceptor pilot is hard to leave behind and it only took me a few jumps to catch up.

Off we went back home where there were of course fights to be had. The boys stopped to kill a pod along the way. I was suffering a fit of coughing and needed to afk for a few minutes so I choked and gurgled until I made it to Skarkon where I docked and allowed my body to vent its full anger. With that accomplished off to Istodard where I wound up reshipping and we eventually got a fight a bit later.

That fight I got to chase down a Scythe and it was put of of service at the start of the fight. Doing the tackle frigate thing means that my number of kill mails is often less than the rest of the fleet. I'd love to have all of the kill mails but I enjoy my various tasks, such as chasing logi and falcon, as well.

After that, I decided to succumb to being sleepy. I finished this little blip about my evening and decided to turn in. I finished my freighter run and logged off for the night.
July 27, 2013