In a game about spaceships blowing up other spaceships in vast galactic wars that spawn enough excitement and amazement to bring the internet's eye, one would think that guns would be the key. And, in a way, it would seem that way. Even the names of our ships, battlecurisers and battleships, marauders and recons invoke the image of weaponization of such a scale as to cause the collective conscious of the watcher to catch its breath in amazement. It is the streaks of prismatic light across the battlefield, the shattering explosion of the spaceship, the trails of the missiles as they streak across the darkness and collide in a brilliance that draws our heart and mind that so often define this game.

But that is not all that there is. 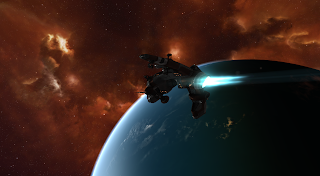 For some, weapons are the last thing that they consider. The use of them, the need for them, it is not shunned. It is just not their place. Instead, they trust in others to bring these items of destruction forward and for them, they embrace a different path.

The path of the support ship.

Its a quiet one. There isn't much obvious glory. There is a lot of helplessness. The support character relies on others. The network of social interaction is strongest for them. For they will throw themselves into a situation that they cannot defend themselves from and they will do it with the belief that their fellows will come to their defense. And even then, they will also sometimes sacrifice themselves. In darkness, with no offensive abilities, a support character will vanish in a flare of instantaneous brilliance as they stand in the face of fire power that they cannot match.

But they are not there to match that fire power.

In the story of battle, the glory goes to the warriors. The songs are sun about the knights as the sun glistens against their armor. The battle call of a tank and the sonic ripping roar of a plane herald in the destructive power that they convey. It is about courage and commitment and the savage brilliance of determination. It is a lovely picture full of bright energy. But, that energy is not theirs alone. Behind them, there are others.  The logistics pilots that fly behind them, their greatest offensive ability their own piloting. The tackle ships that throw themselves into the heart of battle and know that death is a more certain option then life.

It is the decision to hold point as the fleet lands, even as layers of armor are stripped away and the klaxon call of dissolving structure lets one know what is in the future. That moment when the decision is made to go all in and accept that loss creates gain.

It is the calm focus of the logistics pilot as they monitor their fleet and fly. As they monitor each other and go. And as they know that they may only have themselves to depend upon, their wits and their thoughts to make it through the battle. It is the decision to say goodbye as well. The order to be left on the field for the greater good of them all.

It is accepting the loss of being the cyno. Of knowing that you are but a target for all to see. It is the cloaky eyes that will never receive credit, but save more lives then any weapon ever has.

It is even the falcon, a being of such incredible strength that is also full of terrible weakness. A moments mistake and ill roll of the dice and that is all that it takes to separate one from life.

The neut and the webs and the points and the scrams.. it is all living life at the edge of complete and total dependence on the fleet.  It is even the interdictor dropping bubbles on the field as their overview flares yellow.  The call of "links are on!" it is a  sweet sound as a group dives into battle. Only it is trumped by the call of, "point" as the tackle calls for the fleet to come in.

Across the space lanes are the ponderous trips of freighters from place to place. The quiet slicing of ore is in every system that we pass. The dozens of trips from one freighter to another.  These things are only some of the words of the ones without guns.

It is so easy to focus on all the things about guns. But there are times when the guns are not going to get the job done. They are important, and rightfully so, but they

In a game about spaceships blowing up other spaceships in space there are an awful lot of spaceships that will never directly blow up anything. Yet, their value is great enough that they are defined as force multipliers. Others are the hands that grab or the eyes and the ears of those that go into battle. And together they make the fleet. Its very creation the combined efforts of many. The synchronization of a handful, a dozen, or even hundreds of people turn into something that is worth writing about in a way that can bring the combined focus of the internet to a game about internet spaceships.

And its about internet spaceships with a focus on the plural form. Because even a solo pilot is not a solo PvPer without another taking the field on the other side.
June 18, 2013