As one of my work weekends, and what turned out to be a hellaciously busy one, my Eve time was reduced to some store stocking and early bedtimes.

I was presented with a lovely little link to the Character Bazaar on the Eve Online forums. By the time I got around to sharing it it had been deleted. However, Chribba runs Eve Search which is a mirror forum of the Eve Online Forums. It is a useful place to find out what happened before the ISD edits and various edit and deletions that happen on the forums.

I understand why it was deleted. While of great amusement, CCP tends not to want EULA breaking things sitting on the forums. The seller, when approached by the buyers, offered the character not for the 35 billion ISK he had advertised on the forums but for 1,100 IRL ISKies and not the Icelandic kind I suspect.

Within 15 minutes he had three conversations with three separate buyers where he told them that he was Russian, using a translator, and that they could buy the character for IRL money. They all turned him down. One of the more amusing things is that he is dealing with high skill point character traders. These are people with a lot of ISK. I spend all sorts of money on Eve but I would laugh in the face of someone that asked for or offered me money for my accounts. It just seems absurd to me. There is also that rule breaking thing.

I am also not sure how to adequately explain to people that Eve is full of scammers. I had someone tell me that they fell for the trade window scam. It is when they sell and item and do a direct trade. The person puts in the agreed upon price and then changes it quickly and hits accept. People tend not to double, triple, quad check and cheerfully hit accept as soon as the number seems right and poof, their ISK is gone. And in Jita.

One could spend days going over scam after scam and why they are scams but people continue to fall for them. I'm paranoid about these things. I even only open trade windows in Jita with the people I am trading with (alts/corpmates) through personal channels just to be super aware.

We do have people we trust in game even if we should never trust anyone. But, we decide how long to trust them. I have one friend who no longer has my trust to lend him small bits of money here and there because he has stopped paying me back for them. None of the amounts were very large, but when someone asks me for 10 million to cover them for something and can't turn around and pay it back and then forget and continue to ask for ISK here and there... yeah... my generosity dries right up. At the same time, I will do buys worth billions for people without upfront payment or with upfront payment and taking their stuff or ISK never crosses my mind. I have no idea how I will handle being ganked with someone else's stuff as of yet.

And then there is my last problem. Sometimes, I have to wonder if the thin line between love and harassment is to thin. Detta sends me a message while I am at work and asks me, "What about the Scorpion Navy Issue?" and I'm all, "What about it?" To which he shoots a cruel barb into me by saying, "It has the color you like, no?" 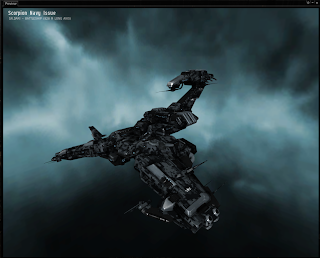 Yes. My filthy secret of urban and water camouflage lust. I have wept bitter, salty tears of sorrow and woe when Odyssey's V3 update of the Rhea turned it into a dull, lusterless monstrosity streaked with the color of orange rot from its awe inspiring beauty of blue, digital camo. I've never said that the color makes even the smallest bit of sense on a spaceship. It is that I have a dark passion for it. Yet here it mocks me on a missile based hull. How cruel doth CCP be?

Beyond my whimpering cries of sadness and loss...

I did manage to get some PvP squeezed in this weekend, even with it being a work weekend. The new carrier wrecks are... I don't know. The only one had a moth chewed look. The new one is just the carrier, but a dark, gray like it was covered in soot. I didn't take a picture because I was to busy wreck guarding in my super Jaguar. A faction Harb, Hurricane and Iskur failed to kill my Jaguar during this time. They then ran away from Altaen's Rupture leaving my Jaguar, in its majestic imagery guarded that wreck till it was fully looted.
June 24, 2013