Of ISK and Wealth 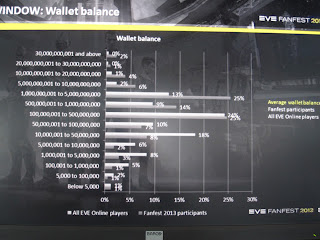 I took this photograph at Fanfest and I hadn't yet commented on it beyond putting it in a post for people to look at.

This particular graph is a useful one because the question of, "What is wealthy?" in Eve comes up a lot. When I first started. I was told that under a billion was space poor and you did not start getting space rich until you averaged around twenty billion ISK. Of course, if one listens to this conversation it tends to mutate around its audience. For some, tens of billions of ISK is meaningless and they quickly lose their perspective and begin to think of Super Capitals as reasonable, affordable purchases for the average player.

We tend to be surrounded by our social group. From that group we develop a normal and a reflection of that normal. The first million ISK wonder of a new player, with round eyes as their wallet ticks up and they are able to afford that first Destroyer to replace their free one is lost. The sweetness of that first cruiser purchase becomes a faded memory.

For some that is fine. The means to an end is the end to a means. Yet, being space poor and being space rich are questions people ask. I think it is good to see where people are. The chart says all players so we can assume they mean inactive accounts as well. Maybe? Who knows? CCP loves to give us information and then leave enormous holes in the details about that information.

What is not noted is corporation ISK. Many people, such as myself, have a large amount of their wealth sitting in corporations. This chart does not reflect that and because of that it does not give a complete overview of wealth. Chart in assets vs ISK and the entire equation topples on its head.

It is still an interesting chart. It is a snapshop of the daily life of the normal player. The player that goes out and hoards or spends their ISK for whatever reason.

Do most players have big investment projects or is that only a smaller, side portion of the game that play that type of game inside of the sandbox? Nothing in that chart reflects on TCS and its value. If I were to calculate its value it would be its assets, its ISK and its employees. This is because if I stopped running TCS I would liquidate the store and sell the characters.

Calculation of wealth is not only the wallet. It is assets and due to the fact that we can sell characters, they to are an asset. What value is Sugar, a well rounded combat pilot? What value Chella, a carrier and jump freighter, and logistics pilot? Or my scanning/scouting/booster building alts? Or my industry alt?  They are all assets with value if I seek to truly work out my personal ISK value in Eve as a player.

But in truth, I'd not calculate it that way. I have around five billion liquid ISK in my wallet. That is how I would calculate my value were anyone to randomly ask. I'd not toss in my hangar values because I assume my ships to be destroyed after I purchase them. ISK these days has become a source to fuel the stuff that I want to do. I'm a project person more than a wander around seeing what I get into person. My projects like TCS or my boosters or to feed my Hurricane Fleet Issue needs. I also like having the ISK just to have it but I have learned to spend it to make myself happy on my own terms. It allows me to do things like run the Rawrcar Doctrine.

What other people have in their wallet doesn't matter unless one is seeking a goal based upon it. It is a useful metric for how much one can have or can make if one is motivated in that manner. But many are motivated by nothing more than fueling their next project be that an invention line, a PLEX, a new incursion shiny or the next thing to undock into PvP. Many of the people that I fly with are ISK poor and they care not about their wallet. Other's fret their night away about their in game finances.

If you need numbers, enjoy the numbers, they are there for you. I don't think that very many people place their personal value by their internet spaceship pixel money but it is fun to know where one falls in the big picture.
June 22, 2013