Sleipnirs causing explosions and missiles on Kestrels
Bright copper Amarr ships and warm under tanked vessels
Brown Minmatara Tempests exploding all the things
These are a few of my favorite kills...

Sometimes a decision is made to undock a ship that is bad. Very, very bad.

I don't often wander into the realms of bad fits. They are everywhere. People write special, weekly reviews in blogs. Bad and crazy kills are announced on twitter. The game news sites like to comment upon terrible fits and horrible losses.

But, we all bump into them. Things that make you wonder what was that pilot thinking. 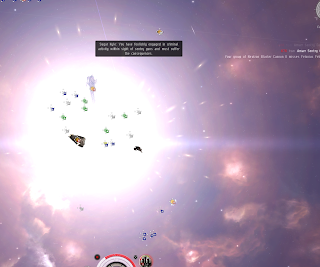 What were the final thoughts as his phoenix exploded around him? Did he go, "damn pirates!" or did he go, "Maybe I should have fit my ship before jumping it to an Amarr station with their minute undocks?"

What makes someone go, "An Oracle has six low slots and it will make the best hauler I have ever thought of using." 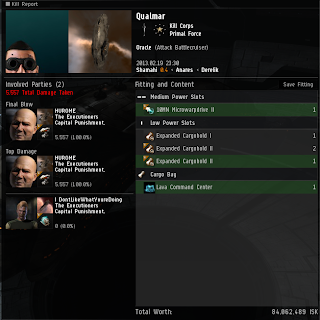 I've undocked in the wrong ship plenty of times. I tend to look. I've undocked in partially built ships as well when I was not paying attention and working on a build. But, I do a HUD check and redock. Embarrassed and not telling anyone of my little failure moment.  Or those times when one might forget ammunition  Still, I don't use my naked Hurricane to scout a fleet and fail to warp off when a Sleipnir runs me down across 100k.

These two kills have been floating around my head for a while as I wonder what their pilots were thinking.
May 13, 2013