"How is Teon these days?"

"Oh its fine. Just some ganking of Mackinaws and Orcas in the belts going on."

My view point. Oh, how my view point is not what it once was. Maybe it was when I was positioning my Procurer in as a warp in for an Orca gank. Perhaps it was the wormhole corp theft. I'm sure it was longer ago than either of those two events. How steep the hill of opinion has become. Without thinking, in an idle response to a question, I did not even see my own answer as abnormal. 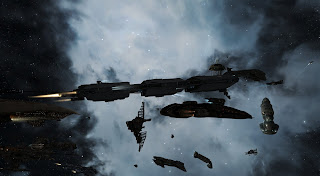 The amusing part is that I find the Jita undock to be a place of terrible, brutal violence.  It makes me shake my head as I warp off to my insta-undock over the violence issues in high sec. The flood of duels and warp disruptors and scramblers flood the screen. Ships explode everywhere and it is a scene of chaos at all times. How can anyone live in that environment, comfortably? I often wonder as I trundle back down to low security space.

Yet, low sec isn't safe. It is just familiar  It has times when it is slow or quiet. I don't often get to experience those. More often than not, being out in space means someone is actively trying to kill me or I them. I want to do my care bearing but it comes at the high cost of awareness and attention and often losing what I was working at due to being hunted. Now, Molden Heath is even busier and that makes it harder to have those quiet times. My 'normal' day time schedule drops the bulk of my play time right into the areas prime time.  If I was more PvP focused, as in, PvP was the reason I played Eve or my only interest, it'd be fine. As it is, I just adjust and adapt because that is all you can do when you just want to carebear.

However, the masses that have been attracted to Molden Heath are not all experienced at living outside of high security space. For all of its violence  high sec is a well understood dance. If no one is at war with you, and your current value is not abnormally high, and you are not in a mining barge, your probable change of being killed is low. It creates habits of people leaving their ships out in space. They go AFK in their pods.

And they bring those habits to low sec. I think more die from the AFK ships and auto-piloting ships than from gategun mechanics due to so many of us possessing a negative sec status. When people tell them, "go to low sec and shoot whatever you find to learn PvP" it would be nice if they added in some gate and station gun warnings.

The mentality of living in low security space is different. Numbers in local are often uncomfortable. Unknown ships are a danger. Someone will shoot you for no reason other than wanting to. Neutrality is not a shield.

Sometimes I tire of that constant, sense of danger. Yet, whenever I leave it, I find myself not as engaged. I really do need to become a better hunter. It will help ease some of the stress. Yet, I find myself puzzled by those that do not see or feel that 'feeling of danger'. But then, I had an interesting conversation with someone about how seriously we take the game and how that affects the outlook on what a person does and how they do it.

Still, the flow of people not expecting violence is almost a flood some days. Planetary Conquest is having the most random side effects.