I decided to play on SiSi some more today. I won't have time over the weekend to keep up with the feedback that will flood in once everyone is off. And I have a stack of serious (aka bad) posts I may try to finish up. 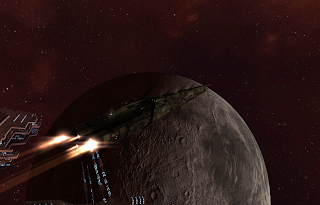 It is a lean, green, 95% of what I want it to be machine. I'm happy to take what I can get. If that means green camouflage and sacrificing one medium energy neutralizer II for a small energy neutralizer II, I'll deal with it. Beyond that, my duel large shield extended, 8 high spot, nano cane is back in business. It is now three times more expensive but damn, it feels good to have it (mostly)back. 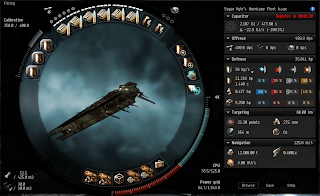 Odyssey. The undock button does abort your undock as a commentor was kind enough to point out yesterday. I'd never have figured that out I suspect. Currently, the button option just goes away once the unload screen starts. However, aborting undock is much smoother now.

Off I went to do more ratting. I have done more belt ratting playing with the changes than I have done in game in months. I found another tags4sec NPC on the second belt I looked at in a .03 system. That netted me a recruiter tag. The spawns seem common so far. The bounty and sec gain is comparable to a faction NPC. They won't seem as common with other people looking for them but the over all feel is easy to find is there.

My security gain. The big ones are tags4sec NPCs. The first one was a faction destroyer.


New question: Instead of chaining belts should we now clear them to encourage tags4sec NPC's to appear?

The jump gate effects are still amazing for me. It just sucks me into the game and makes me a bit excited. Eve really is a pretty game and deserves pretty effects.

My next task was to go and look at an ice belt. This is how the icons look in space. This also shows my random issue of blue to white wrecks. I left the scanner running to see how I like it. So far, I like it. It feels like more stuff is going on around me. 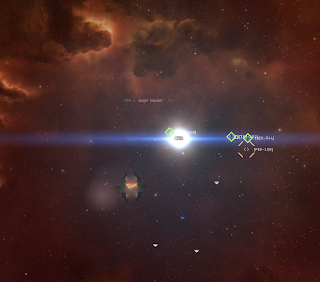 To use the system scanner from my HUD the interface is nice. I like it better than the scroll menus  It will become visual reminders soon. The sites exist in space and you can warp to them from space. If you want to warp to them from the scanner menu you have to hit the scan button to get them to come up. It does not automatically place them in the scan window even though it has obviously scanned them in space. Should it? New ice belts are visually smaller. They are more clumps of ice vs belts of ice.  With that done I logged on my scanning alt and off I went into 0.1 space to see if I could find a Radar or Mag site (whatever they are called now).

I launched in the pinpoint formation. Once the muscle memory relearns the movement is easier. I keep screwing up because moving the formation closer or further apart is shift+alt. While shift + one probe moves the single one around. Anyway, lots of mistakes, nothing huge. Once I found it, off I went! I watched my Legion's guns retract as it warped. Such a cool, small detail I normally don't see because of cloak. 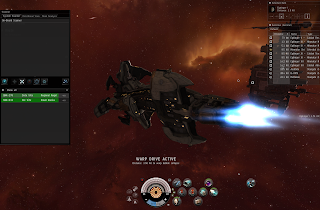 I automatically assumed I'd have to fight NPCs and then remembered, nope.  Also, instead of round cans the sites are now white crosses. 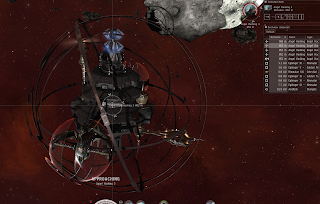 Okay it is pretty and all but you have to click on it and go to open to get the mini game up. I took pictures because I have no idea what is going on. I'm just clicking things. I managed to fail it once I found the button that gives loot. I am fully confused as to what I am doing other than clicking everything. It seems if I manage to make more than one of the 'attackable' button things active none of them work anymore. Sometimes the buttons didn't light up when clicked. 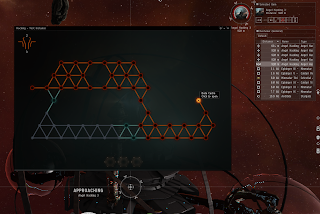 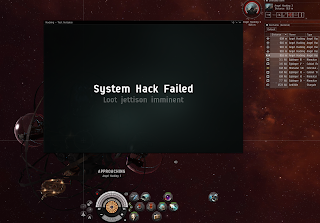 A whole lot of fail. You can try again I guess. I haven't managed to do anything but fail each time. I can only assume I am terrible at whatever it is that you are doing. I really don't know. After an hour and dozens of failures I started to lose interest in this. I have no idea what I am doing and what it is supposed to be doing but nothing has jettisoned out of anything.

Frustrated  I logged off. The mini-game is still buggy. Sometimes the little round things don't highlight and it turns out it was a virus or whatever. Not in love with hacking. I'm kind of untrilled over spending an hour clicking at something and not getting anything. Hopefully others are having better success and it is just me. I kept coming back to it over the afternoon and kept failing. I need to get TCS stocked for the weekend so I'll keep up with the threads and hopefully learn what I am doing wrong.