It was a day of Gnosis.

I was awake and it was a Tuesday Morning (USTZ) so I was out doing chores. I had ships to buy for the Rawrcat Doctrine. I had moved my POS and I have to get back into the grove of my gas reactions. I have been taking a little bit of personal time out to do some scanning and make some spending ISK due to my projects draining my wallet at alarming rates (I do not count TCS income as personal income or use it for myself at this time).

7-2 was out running around trying to kill a carrier. When that didn't work out they wound up hunting down some other random ships. I undocked in a Cynabal and went to assist as Allo, in a Federation Navy Comet, tackled a Gnosis in Bosena. I had just hit the Bosena gate as he landed his tackle and bounced in and warped to him to take secondary. I landed and Establishment point, allowing him to bail and Morita to get there in a Talos and finish off the Gnosis.

As I was going to dock, Allo found another Gnosis on the Oddelulf gate. He went for tackle and again I landed to take a secondary point. The Gnosis jumped and Morita and I followed. I was in half shields and I am not sure how low he was. This was our major mistake because the Gnosis was not poorly fit. Morita went down and I warped out at 0 shields as Gateguns chewed us up. Allo held point but the Gnosis got out in 5% structure.

I went and docked and repaired. I then scooped Morita's loot as he went off to reship. I went back to grab the rest and the suddenly Gnosis on my overview 4k off of me. I had not been paying attention. I started to burn away from him but he pointed and started to neut me. It took me forever to lock him. My lock kept not locking and I don't think he had ECM drones so it was some fail on my part. I just hit my afterburner and shoot at him while calling to Allo and Mortia that I had been grabbed by said Gnosis that had just escaped us.

I can't outrun him. He had an energy neutralizer on me and was draining my cap. My cap was draining and coming back as I did my best to shoot him. I had a flight of ECM drones on him that didn't do their thing. I think he killed them at some point. I don't know. All I know is that he had a microwarp drive. I shoot and shoot and shoot at him and his drones are slowly chewing me apart. This entire event lasted about six minutes. Long enough for Allo and Morita to get to me from two systems away. "How are you doing? I'm almost there."  I was asked. "Hitting armor now." I was dying. I was doing some damage but not enough fast enough.

They made it to me but I had burned 80k off gate. Which sucked. I snap "fleet!" as my armor was evaporating and they toss me a fleet invite as they warp up to pounces. I accept the invite and they warp down to me. Morita is neuting the Gnosis and Allo has a scram on him to shut down his microwarp drive. I had hit structure at this point and at 67% structure the scram drops. I almost weep in joy and hit my warp drive to bail out of there. Seven minutes after it started it ended. As I snapped a picture of my burning Cynabal I can see his pod on the overview as Allo and Morita take him down. 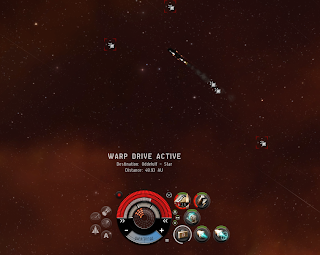 It was a very good fight. He would have killed me and instead he had a juicy Cynabal kill snatched from his turret tips. My Cynabal's power is at range and with him on top of me it was just a matter of time before I died. I, however, had backup nearby and I called them. I wasn't out doing heroic solo PvP. I fully respect people who wish to do so but I would also think they should not complain when the people they are fighting do not go, "oh! Solo activated!" and allow themselves to burn in a fire of honorable 1v1 PvP.

I screwed up and was grabbed. I have zero shame in calling for assistance. I would have died if I had been alone. The funny thing is that I had turned off my MWD to slow down as I approached the wreck because I tend to over shoot them. If I had done my usual thing I would have coasted out of his scram range and probably been able to pull away from him. However, I am not used to my Cynabal or the duel prop and I flubbed all over things several times. It is the first time I've ever been able to push my Cynabal as well and it is more sturdy then I expected it to be. There were a lot of lessons learned with that for me, flying this particular ship and to be a bit more cautious about things in the future. On retrospect, I should have burned for the gate considering how long that entire event took. However, my first thought was burn off and make distance because Cynabal's are rather quick. It didn't work out that way.

Repaired, I went and docked back up in my new home and went back to my moving and buying. Irid had logged in and was hunting down another Gnosis who was out in a belt. He landed on him, everyone undocked, and another Gnosis was removed from the game. That made three for the day.

I have noticed that the ship model is very small. The Cynabal is a pretty chunky cruiser but the Gnosis is much smaller than it is. That model needs a little bit of size added to it. The Gnosis pictured belongs to Irid who was hunting Gnosis with Gnosis. 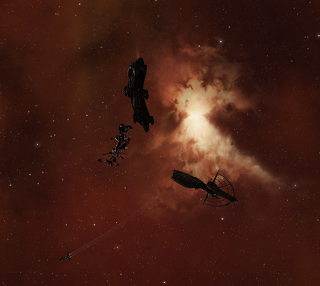 Another point of interest is that we are seeing a large number of these ships alone. I do not think that most people would take a Drake, Hurricane, Ferox, Myrm or any other battlecruiser into low sec at the rate that people are taking Gnosis. They are coming in all fits. Some good. Some bad. There are lots of cloaks and probe launchers. It seems to be a mixture of its amazing (seeming) stats as well as the fact that it is free. In general, you do not know what you are going up against when you go up against these things. I should have used EM instead of Fusion when I was dying so cheerfully during the second fight

There was a lot of learning on my side. It seems I was not screaming frantically as I was going down on coms. I did think that I was going to die. Morita and Allo saved me like ballers. The more I reflect on it the more I should have burned back to gate. Running off was just a knee jerk reaction. For the length of time it was taking him to kill me I could have made it back to gate, deaggressed and gone. But, my automatic assumption that being alone means I am going to die kicked in and I picked the stupid option.
May 15, 2013