The Circle of Life

Ueber killed someone. He decided to run around in his little pirate rookie ship he got for his Fanfest tickets and blap people.  He killed this innocent little mining Venture. 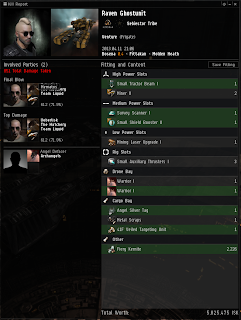 It is an interesting little event. Raven set Ueber to terrible standings. A sad event but not unexpected considering the random violence of internet spaceships that occurred in the depths of the Bosena asteroid belts.

What caught my attention, a little bit later was this:

Some of the Isogen order I had put up was filled by no other than Mr. Raven.

I have only just ventured into buy orders for common, low end minerals in an attempt to build some battleships for my own use before the patch hits. With mineral prices starting to flux the entire project is over my head and I suspect I am doing a bad job. The trickle in of the product is interesting.

But, this little circle of life made me smile. It is so, very Eve. The small, random connections in the largess of the universe.
April 13, 2013