Origin of a Spaceship: Dominix 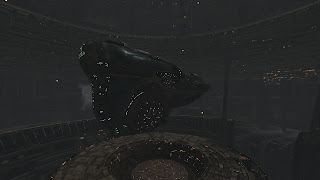 It is a well documented piece of history that the original Dominix were not properly classified as spaceships for some time. Although discovery was swiftly made by the first survey teams, the Dominix was inappropriately classified as an organic nest believed to have been built by drones. The bulging, spheroid shape and the dull green-gray coloring camouflaged these ships well enough that entire flocks of Hulks and Mackinaw's would descend upon the slow, migrating fleets and attempt to mine them.
Due to their placid nature, the Dominix was one of the first domesticated spaceships in what would become defined as Family Gallente. There were arguments over the genus classification, but due to their hunting prowess and great size, Dominix were properly classified as genus Battleship.

Observations
The Dominix is an ancient species of spaceship. From fossil records, found in asteroids and dead planets, hull components of Dominix can be found. These components are often in line with current specimens  showing few if any transmutations that suggest an earlier representative of the species.

The spaceship is highly social and maintains a vast, intricate social structure in the complex size of the fleet. Remote repairs on older or injured members is commonly seen. Drones also appear to not have a particular individual in which they reside but consider the greater fleet to be their home.

The Dominix is an easy keeper. Its good temperament combined with its ease at reproduction have allowed for the creation of various, specialized Dominix in domesticated environments that can support turrets from lasers to smartbombs.

Other points of Note

The Dominix is only of the few clearly omnivorous spaceships in its native environment.

The size of the Dominix and its intrinsic relationship with drones has allowed it to have a symbiosis greater than many documented spaceships with drones. A Dominix can be sub-classified as a natural hive and the native environmental of drones. This has led to some wild fleets being classified as protected due to their harboring rare drone species.

Additional Facts:
From the Research Notes of Cheradeine Harper:

"Deep Space Anthropological research into communication methods with wild Dominix reveals a trinary core to their language rather than a binary base.

Rather than label the three core components of this fascinating find with numbers, the researchers used syllables based on the sounds produced during translation. Currently the three syllables are referred to as "POH" "TAY" and "TOH"."