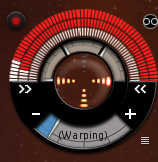 If nothing else worked out during the night and I died in a fire the moment the next engagement started, my night had already been made.

I picked up on a 7-2 Rupture/Interceptor fleet just after I had come home from a rather long day trying to do simple things like order a washing machine and dryer. I had a Stiletto in Half still. I had left it there after DP traded it back to me during one of the long days of POS protection we had  a few months ago. With our FC missing in action I was able to jump clone into an empty clone and get back to meet up in the staging system. I then begged for ammo and with my ammunition needs fed I settled down and waited for the fleet to start.

I like interceptors but I have not had a lot of opportunity to fly them. They are fantastic ships but they offset their mind boggling speed and amazing tackle abilities with being made of glass and wishes. In low sec, gateguns will pop an interceptor in about 3 hits.

We were three jumps into the roam when Razor called out that a Cyclone was headed towards us. Like any good fleet we stopped and reapproched the gate. We had a Scimitar on field and he had me locked up. I laid my fair in his hands and when the Cyclone jumped through I pointed him. My armor started to evaporate. Secondary point was called and I started to warp off as he died and "get the pod" was called out.

I did what any self respecting, well behaved fleet member would do and pointed the pod as well. I was well into armor now and the Brandobas was keeping me up as the guns whacked me into deeper armor and he repped me back up. I dropped into warp at 6% armor as I warped out.

And I was giggling the entire time. It was silly to stay but I couldn't resist.

Once I caught up with the fleet it was down into the dronelands of null sec. I know so little of null. People live out there. The rules are different. The fits and fleets tend to be different. We buzzed around and it took to the end of our route to find a fight with The Unthinkables. They were running around whatever system it was, anchoring cyno jammers and doing whatever sov chores need to be done to do sov things out in sov space...

But DP ran around and others ran around and finally they gathered up a fleet and warped to the gate and to us. And then it was a bit strange. I'm used to locking things up and trying to kill them. This was a bit of a stare down for a minute. They blapped at our Scimitar and tackle but we jumped. Finally, everyone jumped, I pulled range, and the fight went down.

They met the unexpected damage of artillery Ruptures. I was skimming around the edge being chased by Cynabals and their drones. It was frustrating because every time I got in I had to go back out. I'm not sure if I was to shy and should have been bolder or if I did the right thing harrying the edges. I did go for the blackbird when it came in but I spent a lot of time running away from drones and random pot shots. As I reached an Ares it died.

I have a lot to learn with the interceptor. It is very fast and the situational awareness is important. Swinging in and out of the fight while making sure not to get caught is a blur of activity. We lost the bulk of our fleet but took out a nice chunk of theirs before the FC called for us to bail.

It was interesting and a bit different. I'm so proud of myself for how well I am doing with ignoring local. Back home, I went afk for a bit, came back, and joined 7-2 to run off to pop a POCO for Allo.  I'm not sure if some people realize that we will take high sec shortcuts sometimes. However, it can be amusing when an entire fleet erupts into high sec and takes off.  The faction police pile up at the gates as we run through and sometimes we scare the residents of high security space.