When Death Comes We Fight

It is that moment, when you are there and one of the carriers has been tackled by Pandemic Legion and you know that you are in a no win situation. We're small gang. Our fleet had almost thirty people. We had shaken our corps out and called in our friends. With the current state of null we had no more resources to escalate. 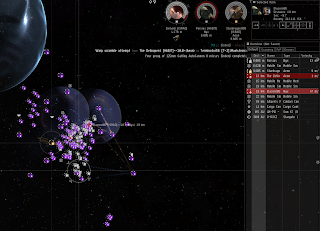 Nyx, Nyx, Aeon, Aeon. We had been trapped. The first call was to get on grid and get our carriers into the POS forcefields. We lost the Chimera.

Here is the z-killboard battle report. Our efficiency is rather low.

After that, the question becomes run and cut loses or do what we can. It is an interesting moment when pride and common sense come together and a decision is made as a whole to do as much damage as we can. It's going to be a futile gesture  We don't have the ammo for it. We don't have the DPS for it. Our fleet was going to burn and we were all in, fuck this, kick the tires light the fires and baby let it burn. 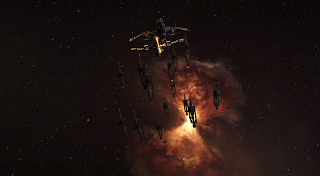 We landed as our Chimera went down. As we were in warp the FC called for us to drop the mobile bubbles we had been using on the gates. People started to throw bubbles out of battle ships. Bubbles went up and we bumped the Nyx into it. Everyone seemed so calm. The FC just flowed through it all. Deal with the situation. Do what we can. Accept what we cannot.

Kill the drones. Bump the Nyx. Avoid smart bombs. Try not to die. Shoot the Nyx. We're not going to kill the Aeons, but there is a small chance that we might be able to do something to the Nyx. Batphones went unanswered. The null sec super powers told us to pack up and go home. Instead, we stayed and asked if anyone wanted to help out.

Bubbles, bubbles, bubbles, everywhere. Shooting and Shooting our Basi's repping and repping. We knew we were not going to kill any super with the fleet. Millions of hit points and they were prepared. We still pushed and pushed. 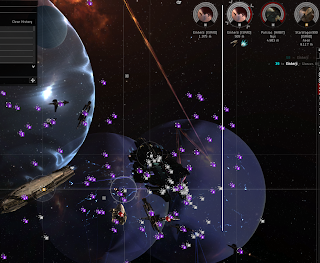 As they worked their last Aeon out of the bubbles Hash's saber landed and snapped up his bubble as the Aeon jumped. Jump aborted. He got to stay on grid. 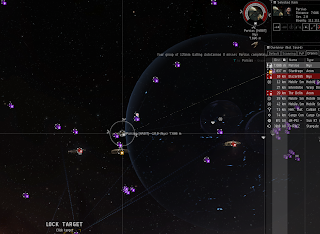 Now with the cloaky Sabre darting in and out we kept fighting because that is what we had left to do. It'd end badly. It was ending badly. We chewed through bombers. They'd lose some ISK at least. We knew that they had backup on the way.

What do they think of us? I don't know. It does not matter. It might have been dumb. It might have been brilliant. It was, however, a moment of pure teeth gritting tanacity. We unacnhored our small bubbles and put them in front of the the supers as they tried to align. The sabre kept warping in and out, rebubbling them as they went along.  One Aeon got out and we chewed at the Nyx. Futile. But fuck it. Pew. Pew. Pew.

This was not the fight we had planned for. It was the fight that we got. 14 Maelstroms, 4 Basilisk, a Rokh, a Hurricane, a Vigil, a Huginn, a Rapier a Jaguar and me in the Stiletto. And we fought because fuck if we were going to run. PL supers tackled and bring the fight.

Twenty minutes later, they got their backup cyno in. We didn't pop it in time. 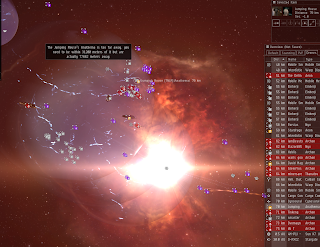 Carriers on the field. The only solution is to bubble them as well. The supers got out a short bit later but we managed to bubble the carriers. Over, and over, and over again. We harassed. Our interceptors skimmed the edge of the group and pointed and chewed away.

We lost another Maelstrom in the process to a misclick. Another of our stragglers got caught in a camp put up by the people we who had reinforced the POS and called PL. The word that we tackled PL trickled back down to us.

They started shooting the POS. There went that whole defense thing. It seemed we would lose the POS now. Our capitals were out. We were ready to bail if it went down. We held them down for another 11 minutes until they finally killed the Sabre and decided to get out. We tried to point them but that didn't work out because we hadn't killed quite enough drones. I had a pack of warriors chasing me at one point. Point, run, point, run.

And they left and we stared at the field and went back to repping the POS.

Not the evening that we wanted to have but it was the evening we did have. I'm sure their side was a different picture. On my side, I'm rather proud of us. It is one of those things about being a smaller entity in Eve. You will get crushed by someone sometimes. We can't stand toe to toe with PL but we can not scurry into the corners when the fight does come down.

I'm not often into the thoughts of bravery or suicide into something to prove a point. But this is one of those times when I'd rather go down clawing and screaming then slink away with my ears back and my tail tucked between my legs.

So this is the story about getting stomped, and biting the foot that goes to kick you. It's a part of life in small gangs. A part of clawing your piece of Eve out and holding onto it with all the vicious tenacity that you have. Good job, by PL. They did a lovely trap and snapped the jaws closed on us. I loved how quiet local was. Quiet until the supers started extracting and we bantered back and forth about the masses of fighters that we had killed. It was good. Damn good.

It was a good fight. It wasn't a fight that we won. It wasn't a fight we had a chance to win. But it was good. It was thirty minutes of raw effort on our part without us backing down.  Mad props to Hash for getting some help into us.  We had a lot of after action talk. We made mistakes. We discussed options. It was a good breakdown and it was healthy and well done. No anger. No snark. Just good fights all around.

Raw Defiance, erryday. I do love Eve. That was an amazing time. All over a small POS in back end NPC null that 7-2 took days before.