"I'm going to leave Sugar with you and be back with an Orca," said Vov.

A moment later, Vov warps back in an Orca and ejects from it and warps off.  "Holy shit!" they say and drop point on me. Someone jumps into the wormhole in a pod and off the Orca goes.


You see, I had just logged in about an hour before this little event and Vov(star of 180 minutes) goes, "I got in a Wormhole corp."

"Nice." He had been trying for a few days but shying away from full API checks. Something about having robbed his last wormhole corp blind that he worried might upset them. We had suggested that he push forward and give the API anyway, make up some random lies if they had questions and see how it went.

His conversation with the CEO went, "We do full API keys to check for corp thieves and AWOXers. Here is where the high sec hole is. The corp bookmarks are there. I've given you POS permissions. I'll be offline by the time you get there."

"Okay," said Vov. As I log in he tells me to get an alt started to the high sec system and heads there himself to see what there is to see. We hop onto coms and start planning to take everything.  "They gave me starbase configuration!" he crows as he bounces into the wormhole, through the C2 and into the C4 (I'm trying to get these terms correct) where his new corporation lives.

Once he lands he is all sorts of excited. There are ships everywhere. Three Orcas are sitting in space. He tells me there is a Viator there.  I start Chella rolling that way along with my scanning alt who stopped to get a hauler and cargo expand it all over the place.  As my alt gets into the system he works the first Orca out. I meet him at the wormhole and try to remember to save everything. We go through, save the bookmarks, and as I warp off as a Manticore lands.

I warn Vov. Chances are very high the gig is up. I'm hoping it is someone that is just  a curious wormhole bear and won't actually try to do anything to us. Vov is pretty sure they may not know where we came in from. We go through, I forget to save the wormhole on the side that we are stealing everything from. Sigh. Not used to wormholes. I did try. I warp to the sun and log out while he moves the second Orca. I'm expecting him to land in a bubble and lose everything. Then he looks at the fit on the Orca he is in and realizes that it is faction fit. As we are boggling in shock he forgets to warp the Orca and moves it towards the wormhole because we fail at wormholes. The Manticore is probing him now but he manages to remember what he is doing, warp to the high sec exit, and hop out.

I log back in and exit my ship. He drops that Orca off and comes back. This time he brings me a Tengu and takes a Loki for himself. We get them out.  We go back in. He brings a second Tengu and a Tengu for himself.  We get them out.  When we go back in this time they have a Sabre on the side of the POS we are stealing from and bubble us.  This is when Vov uses his elite talking skills and offers them an orca, Tengus and whatever they can steal from this corp theft. They decide to see if he will really give them an Orca for letting our pods go.

He returns with the Orca and suddenly we have new friends.  He also gives them a Tengu and a Noctis. The Next Tengu I get and take it out.  As we are discussing what to do with all the ships we figure out that he can change the POS password.  A switch change and now I have a Viator and a Oracle on the way out.  We give the password to our new friends and they come and start looting everything they can get their hands on. There were stacks of ships hanging out in space that Vov had ejected from the SMA (ship maintenance array).  Well, not for long. 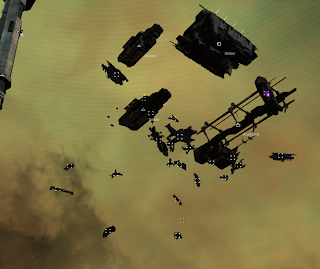 Vov didn't have the roles to get into the rest of the corporation hangar. However the CEO had said it didn't have much in it. We've already cleared out the Orcas, Tengus, Loki and I nabbed the Viator.

As our new wormhole friends called in reinforcements, I manage to nab 3 drakes, a Moa, an Iteron, and an Iteron III. Grand theft spaceship and space is empty of hulls in minutes. I couldn't even use half of the fits on the hulls. Not that it mattered.  Board ship, run out of worm hole, wash, rinse, repeat. The helpful corp had more people come in.  Vov just gave them fleet boss so they could add whoever they needed to fleet to clear everything out faster. 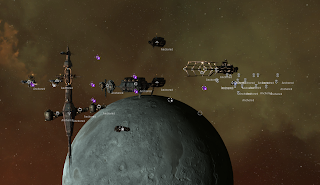 They then brought in some DPS ships to take down the extra large corporation hangar. As soon as the POS shields dropped they started to beat at that hangar.  It came apart quickly.  I had gone back to the sun and picked up my hauler I left there. I hovered over the corporation hangar, along with all of them, and like vultures we sucked it dry after it exploded.

I picked up some random gas, ore, a piece of a capital ship and who knows what else.  The wormhole corp decided to do the cleanup. With the corporate hangar down, Vov and I were done. I collected my abandoned Rookie ship on Chella and we left, with no traces behind us.  Our new friends were like, "Yall are leaving?" and we said, "Yup. Thanks for listening to us and giving us a chance!"

How that worked out I have no idea. I commented on it to someone in another wormhole corporation. He told me that they never would have listened to us unless we were offering to bring back ships to fight them because PvP is the most important thing. Then he wanted the corporation that assisted us to 'blacklist' them. Whatever. It's okay to go and shoot other groups POS to see if they are stronted to take all of their stuff but assist some pirates in a corp theft and you deserve black listing. Whatever.

Another 120 minutes.  Another corporation cleared out.  We tallied our goods.  Vov had 2 Orcas shoved full of stuff, a tengu or two and a loki and some random ships. I had the three Tengu (I keep calling them Loki), three drake, an Oracal, a Moa, an Iteron, an Iteroin III and a Viator.  The haulers all had assorted stuff in them.

Buzzed from the sucessful theft and the hysterical fact that it worked out, I moved Tengu around as I got myself sorted.  There was a link bug going on and I couldn't make Red Frog Contacts that night. I did move Tengu and decide to keep one of the three of them.

ISK tallies are 5 billion to Vov.  Three billion to me. A few bil for the other corporation and who knows what else. They said they'd send me a tally list when they were done.  I spent some time deciding on which Tengu to pick as a trophy. 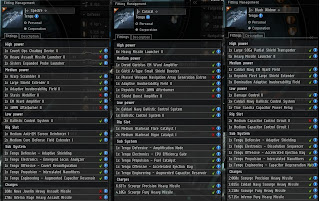 In the end, I picked the one without bling.  It will be a hangar queen. Testament of this theft because I like trophies  The others will be sold.  One has already relocated itself to a corpmate. He purchased just the hull, rigs, and subsystems. Why this thing looks like a tentacle beard creature I don't know. 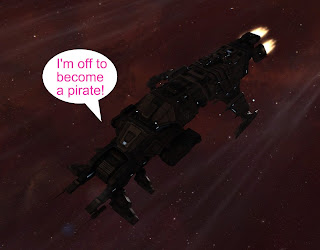 The T1 hulls will go to TCS for sale. Retail by Piracy erryday in Bosena.  Also, I have a massive amount of missiles as well.  The other odds and ends will ship up to Jita for resale. Contracts were working again after downtime and Red Frog is now moving everything to my high sec base for sorting.

And this is why CCP announced personal hangar arrays will be coming in the Odyssey expansion, summer of 2013. Now we will have to shoot their personal hangars and hope their shiny stuff drops.