Eve Side Chronicles: The Curious case of Iceland and Griffiti

Photos of Fanfest and Iceland

I'm still in Iceland for another day. Meet the "come at me Bro" puffin with a lovely green backdrop provided by my husband's shirt. This puffin is coming home with us. 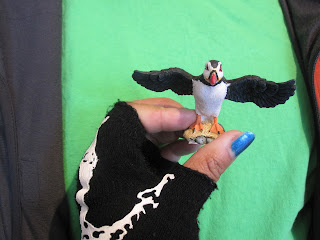 As I understand crime as defined, destruction of property is considered a crime. Destruction can be defacement and under defacement one can easily slot spray painting.

I have seen more of Iceland at night then during the day. This day was the first day after Fanfest. I have another day after this one and I head home the following afternoon. This is the first time that I slept in. I managed to acquire almost a full mornings sleep after I finished my last, endless ramble around four in the morning under the brightness of a freshly risen sun.

The task of finding food led us down a wind swept street and to a small, corner ship where my husband first acquired a beer our first night in.

We had been trying to figure out where the food was in this establishment and eventually, we discovered that the restaurant part was upstairs. Up a narrow, steep staircase with a heavy, textured wallpaper from a different era. The hostess stand was somewhat at the top of theie stairs and tables spread through.  We were given a window seat and menus.

I am not used to the difference in feel to small places like this. At home, I often avoid them because they are strange to me. When I go out of the country, I somewhat seek them out but the strange, intimacy and lack of the normal formal habits that I am used to for a public place leave me a bit disconcerted.

However, my view let me see the fact that Iceland is not free of people throwing their gum on the sidewalk. 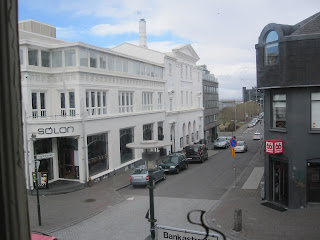 Seeing things like 'american pancakes' makes me giggle. They had coco puffs as well. I settled for a 'hangover' sandwhich which you can pair with a 'hangover' milkshake that has a shot of Jack Daniels in it. After that, I wanted to wander to the graffiti park that is just past the Celtic Cross. I know some Urban neighborhoods make such areas to let people express themselves through their spray paint in a more controlled area. 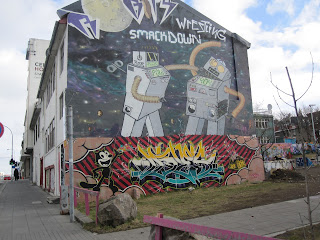 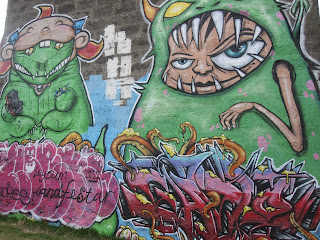 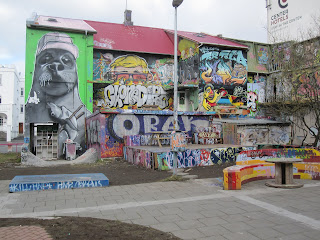 There are so many layers upon layers. I've noticed that graffiti is everywhere. Often is is contained to fences and public structures vs buildings and homes.  There are no trains here so the railroad cars coated in graffiti are not seen. And a search about it shows that it is an ongoing situation. It is interesting to see. In many ways, it does not quite fit in. As I walk the streets it is everywhere. And I cannot always tell when it is artwork and when it is graffiti  Not being able to read anything it says does not help the situation. The city is rather neat and clean. The people that are out in the restaurant turned bars and clubs at night are 'smartly' dressed. I'm amazed by the sheer number of mini-skirts in the frigid cold air but looking good has always been more important than comfort.

It doesn't give the impression that the city is not safe or run by roving gangs. It is just everywhere that you go.