Eve Side Chronicles: The Blue Lagoon, a Lighthouse, Dinner, and Snow

Photo album from Fanfest and Iceland is here.

It is my last day and I suspect I'll stop writing about Iceland and get back to writing about Eve. The other night, at dinner, I was sat by the window. The window is drafty. They always seem to be. The place is cold, I will give it that. But, the view was nice until a random ma knocked on the window, rubbed his face and lips against it, gave me the peace sign and kept going. It was amusing but it was also WTF. The other table in the restaurant was occupied by a group of Eve players. I will miss the chatter about the game that I would catch as I walked around the town. 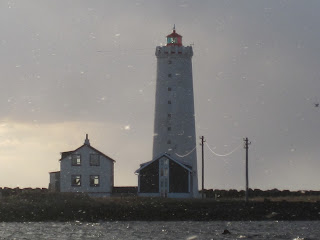 I won't miss the random snow storms when I am standing on a cold beach with my hair still soaking wet from the blue lagoon with cold wind ripping off of the Atlantic and shredding through my inadequate spring time North American idea of a jacket. 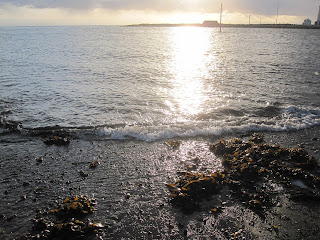 The day started off with my husband convincing me to get out of the bed. I have been out and about more this last week then I do in a month outside of work and it caught up to me. I'm a home body and I find myself almost shuddering with exhaustion at this point in the trip. However, we leave tomorrow and today was supposed to be the blue lagoon visit. I managed not to talk myself out of it but dragged myself down to the car and off we went.

Iceland is a tundra of volcanic rock and lichen  The planes sweep away to the bases of distant mountains with the occasional house or small town sweeping in and out of view. It is bleak but pretty. I can almost forget how cold it is as my imagination slips off into heavily clad forms in fur cloaks working their way towards some unknown goal. 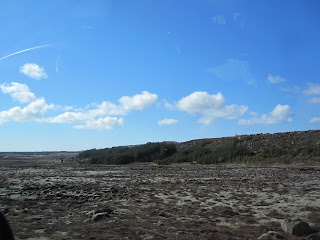 The Blue Lagoon was an interesting experience. A power plan that collects geothermal heat is right beside it. From the shows that you see about it, it seems as if you will just walk into some pool of blue water that is sparkling and beautiful and soak in the heat until you are done and walk off into the Icelandic sunset... 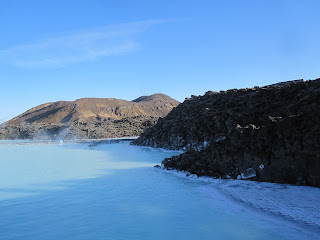 In actuality, the Blue Lagoon is a completely comercialized place. Its a bit pricey to enter. Bring your own towel, they are expensive. It is fully enclosed with a cafe and a restaurant, changing rooms and a spa and bar in the lagoon itself. You are given a wristband that will key to your locker and allow you to buy drinks.  There is also a lot of nakedness. I'm American, I'm body shy in public and the entire trotting around naked thing in the locker room was almost a deal breaker for me. I managed to slip into shadows, cover myself with a towel, understand that no one gave a damn about me but still feel embarrassed and follow all of the rules at the same time. It is, however, the one reason why I may never actually go back there.

But, once outside and in the water it is a nice experience  The water is warm and the ground uneven but smooth with a coating of fine black sand. The pool varies in depths all over the place. You can go to the edges and tan or find the little alcoves with their carved, stone benches. There is mud masks to play with, drinks to get, and lovely, lovely water to soak in.  We stayed for about two and a half hours before fatigue and hunger chased us out. There are walkways around lots of areas and some places where people can come take photographs. It is not nearly as uninhabited as the ads make it seem but the habitation isn't bad.

We got there around 1430 and by 1600 it was busy. When we finally got out of the water the place was packed full of people.

The naked thing had to happen again in reverse. There is a sign asking you to dry yourself fully and take off your swimsuit and put it in this nice plastic bag provided so that the changing area does not get wet. All of this naked stuff is just yuck. Again, no one paid attention to me or noticed. That doesn't make me like it any.

To be fancy dinner was at the restaurant. It was okay. Not the best meal I've had here I will admit but nice. The complimentary appetizer was a piece of smoked salmon the size of my finger tip, a singular crouton and dot of mayo. 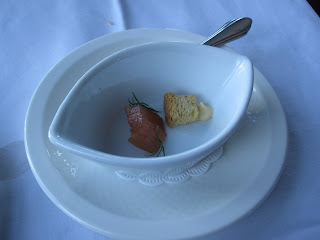 Thankfully, I had ordered a salad that turned out to be a real salad and not just rocket.  I had a discussion the previous night with a bunch of UK people about rocket. I think the stuff is terrible but they all love the peppery taste. Bleh. 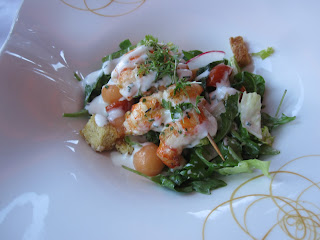 My mostly not rocket salad was good. It had melon in it. Normally I am not a fan of mixing fruit and salad but what the hell, right? I still ate all the fruit first. The beef tenderloin wasn't the best meat I've had since I've been here. I will admit that food is expensive but most of what I have had is oh so good. Once full, I got some type of native ice cream cone from the Cafe. It turned out to be really, really nasty. The ice cream was not as creamy as I expected and just nothing tasted quite right. The gift shop was also uninspired (if pretty), full of expensive things and furs. I've never seen so many real furs. It is kind of like trying horse. Some things are so very taboo and looking at all the fox fur stoles and rabbit fur hats and gloves and scarves of wolf and reindeer and everything else was odd. PETA would come with buckets of paint and have a field day. What I really wanted was a piece of rock from the lagoon. Oh well. 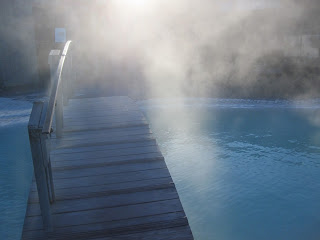 We stopped by the lighthouse on the way back to the hotel. Tomorrow, I've been promised a slow morning, a meal, and then a trip to the airport for another flight that hopefully will be a bit better. We did look into upgrading our seats but it seems that upgrading is not a thing that Icelandic Air does. They did offer to let us buy a complete set of new tickets at full price. 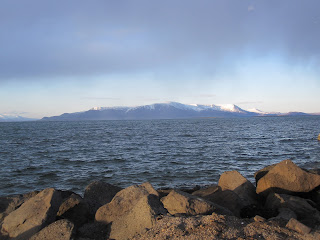