I am separating out my travel ramblings from the Fanfest stuff. The Fanfest stuff should be labeled as to what Event I am writing about. This is just me musing over Iceland and general impressesions, dinner, books, and RMT.

Power is one of those things that you take for granted until you don't have it. My life is filled with electronics and watching my batteries die during the period that I was converterless was terrible. Also, my flat iron does not work here because it draws to much energy. My poor hair will slowly turn into its normal wild mass as I struggle to work with a blow dryer. By next tuesday they may classify me as a native creature.

The shower is also the entire bathroom. Or, if I exaggerate a bit it is most of the bathroom. The corner/third/square that is the shower has a slant and drain. There is a plastic half circle on a hinge that you use to stop the water from drenching everything. Maybe people here don't splash as much? I don't know but I manage to drench the bathroom and the toilet paper had to be emergency rescued and relocated to a high shelf. It is very space saving but I can't help but feel that I'm dancing around the bathroom splashing water. The water also smells of sulpher a bit and it is rather drying. Thankfully, I tote along an entire mini-bathroom with me. 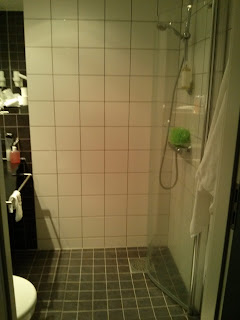 The toilet is also inset into the wall. It is space saving and neat to the eye but I can't help but wonder how a leak is handled.

Anyway, leaving my musings on the intricate wonders of the Icelandic Hotel Bathroom, breakfast was upstairs on the eighth floor. It is called the Sky Lounge but it has breakfast that is just walk in, get a seat and load up on food. It was full of Eve players and again I was disoriented by the lack of directions for what to do. It is not that I do not know what to do or how to eat food. It is that I am used to waits, and hostesses and signs with information on them. When all of that is absent I spend my time worrying that I am in the wrong place and doing the wrong thing.

On top of that Xander was tweeting how busy the line was getting to get into the Event. It was only 0930 and the first event at 1200. I was like, WTF? My husband convinced me to stop panicking that I would not get into the Event and eat breakfast. 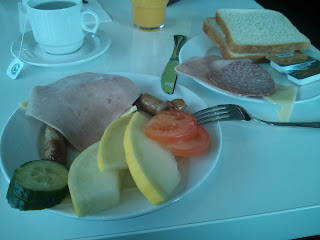 Once fed I wandered over to get in line. There was a lot of wind. Some people struck up conversation with me and I didn't feel quite so weird and awkward. The line moved fast and we were soon out of the cold and twirling around inside. It seemed impossibly busy. There were lines everywhere. In the end, I wound up sitting outside of the Retribution Roundup for an hour after accidentally wandering into the CCP only area along with a few other people just exploring the building. I scuttled out when a distressed Dev was running around wondering why they didn't have their area blocked off and sat by the room.

There were massive lines for the PvP tournament and the Pub Crawl. I read twitter and waited and people watched. It is interesting how people travel in packs. PL is a huge presence and they move in energetic blobs. Goonswarm is also swirling around in high numbers. There are tons of corporate and alliance shirts and hoodies. Being by myself means a lot of alone time. People look at you and dismiss you. I'm not one of their people. They don't know who I am and I am not who they are looking for.

However, the various talks proved to be interesting. The Round table rooms are small and get stuffy quickly. The Wormhole Round Table turned into a bit of a mess when massive numbers of people showed up to an already last minute event. Then they moved it to the game area and really they were not set up for it and sound was a big issue.

I did wind up speaking with CCP Explorer for a while. I gave him his chocolate bar and he went through a moment of "wtf?" and worry. However, he remembered it was something, looked it up and came and chatted when he saw me a bit later. His son was there as well and I did ask permission before I fed him caffeinated chocolate. I wound up meeting a whole bundle of Devs at that point including Masterplan and Paradox. I fed everyone chocolate and felt that my project was at least a success on the most basic level. It is amusing that I would find it easier to socialize with developers rather than players but that is how that session wound up going. I went to several things, I found Ueberlisk (King of Oddelulf, yo) as well and got to chat with him for a few minutes. I got a hold of Druur who had wandered off to do the exercise thing. Siuil finally surfaced after the Crimewatch/Low Sec discussion. He is such a social butterfly.  That is pretty much all I met when it came to people. Maybe tomorrow will change.

I skipped the Dust Keynote because I was tired and hungry.  Dinner wound up being Sushi. I tried horse. It was quite good. I felt a bit guilty because it is so looked down upon in America. Sushi pictured is not all me. It was half and half. :) This was at Sushibarin.is and it was excellent. The chief convinced me to try the horse and I am glad that he did. I also had some delicious but somewhat salty miso soup. 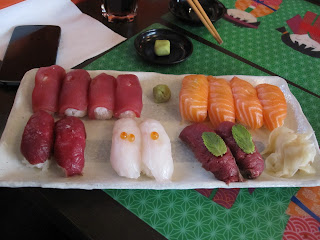 Next shopping. I was lusting for Eve books. The Eve Store at the Harpa only had Templar One and only in hard back by the time I got there. That would not do. Off to a book store to buy some Eve books and see if I could pick up a few local authors in English. That is one of my biggest hobbies when I travel. I love reading books from other cultures. The day to day aspects of life are so different and it is an intimate look into how others live and think. 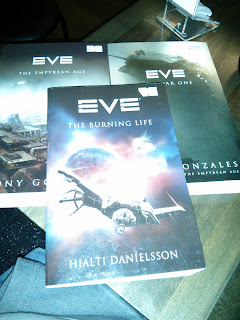 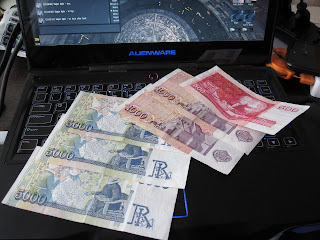 I wrote a good bit, mostly about the Crimewatch/Low Sec. I also have written most of the Retribution Roundup and I have Soundwave's presentation as well. We will see what surfaces as completed.  Bed a bit earlier today because it will be a longer day and all the Q and A and transcribing my own handwriting is exhausting work.
April 25, 2013