CCP had a closed World of Darkness review. They did not want video footage leaking out to the press when they are not ready for a release.

Number one: It will not be released next year.

Number two: I did not take any pictures or recordings of the lovely preview the gave us after asking us not to record it. All pictures are from the still shots that they showed as us their basic idea/demo of things. We were not asked to put our cameras or phones away at this time and many pictures were taken. These are all concept stills but they show the feel of the game which I think is important.

TL;DR: I think that they are making a beautiful and interesting game with potential but no world breaking secrets are here.

Onward into this. I'm a big fantasy fan. I am not a twilight fan. However, World of Darkness has potential in my mind if it has the same vicious sandbox thing that CCP has moved forward with Eve. They have to separate themselves from the cookie cutter box and the best way is to not be a themepark in a world of themeparks it seems.

For a game that I often hear commented on as "That stupid vampire game" the was a nice turnout for the presentation.

The team for World of Darkness is small. Dust 514 has been a huge push. However, they are there and they are doing their thing steadily. 2012 was focused on tool building for later world building and creation. They have taken the time to build all of their own tools and use those tools to create a world that they can manipulate with ease.

They have been fleshing out their system.

They are looking to have political social structures that are not just about meeting people but honor and betrayal, schemes, spies, and everything in between.

It seems that the lucky CCP employees get to play test internally a lot. They also enjoy killing each other. This is going to be a PvP game where you can run through the streets killing other players if you are capable enough. Yet they want that interactive social driven game play as the focus.

They are also working on a web based interactive system that will allow you to keep contact with people out of game. Basically, the real version of Eve Gate but more better. I assume this is all part of their Crest build in the long run.

They are working on things like the AI, the NPC interactions and the Clothing style. This game is very fashion focused. 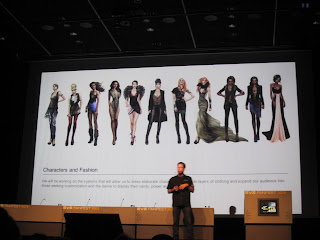 Then they showed us the tools. They have made it so that they can create, manipulate  and shade in their environments quickly and with a high degree of customization. They have a great system that works around the internal numbers in the game for how players can jump and interact with objects to make functional levels. 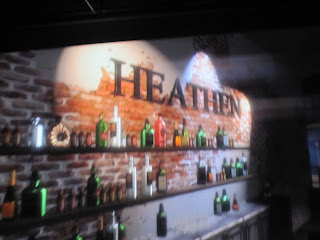 We got to see a lot of pretty art work. 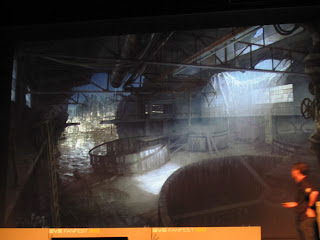 My slideshow album for World of Darkness is here.

The bit of footage that we saw was a bit of internal demo. The character moves through the world, its raining and the rain and wet textures are lovely. She bites some dude, then climbs a wall, walks through a club, jumps over a ledge, and gets into the fight. The most interesting moment for me was when the character leans against a railing and the body position changes as she looks into the distance. It was very natural. The combat has very powerful sounding effects. More biting and then two more possible opponents creep out of the shadows. Then it fades away. The clip is about 3 minutes long but it was very powerful.

I didn't stay for most of the Q and A.

The first question did ask if they were going to be more adult focused. They said yes and that Eve's audience is int heir late 20's and 30's averge.

No, the asker went on. He meant are they going to handle adult themes like full frontal nudity.

The problem with that is that it is a global game. The example used was that red blood is banned in Germany and frontal nudity in America. They have to work with everyone. When they allowed clothing to be fully looted they had lots of naked people everywhere all of the time. They will make a more adult game but it has to be reasonable at the same time.
April 26, 2013