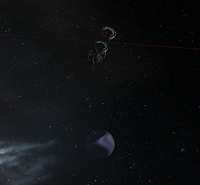 The exterior membrane will appear to be fragile and ripple. However it is sturdy and not prone to collapsing upon itself.

Properties:
There is no stickness or rebound and movement is freely made through the exterior membrane   However, internal properties destabilize spaceship warp cores. The root system forms a central node at the center of the globe.

The sub-species Interdiction Spheres are short lived, fast spore Warp Disruption Fields cultivated internally by spaceship. These fields are ejected by the ship and briefly flare to life, releasing their spores before vanishing.  They are easily differentiated by their lack of a solid root base at the center of the Warp Disruption Field.

Location:
Warp Disruption Fields absorb energy.  In inhabited areas they can often be found clustered around jump gates, stations, and artificial structures.  These non-natural objects attract the Warp Disruption Field.  They can start to cluster at times; becoming a nuisance and must be cleared out of the area.  This purge was done on a large scale in settled, empire space.

Warp Disruption Fields can be found in proliferation in null security space.  In these areas, while clustered around manufactured energy sources they may also be found near suns and planets.

Intentional cultivation of transplanted specimens has caused a population to inhabit wormhole space.  This population can now be considered indigenous.   However, due to the sporadic nature of settlement in wormhole space they are prone to migrate towards any structure in large amounts to draw enough energy for pollination.

Other Points of Note:
Warp Disruption Fields are commonly known as 'bubbles'.  This term is only used amid the capsuleer pilots.  However, the common influence of their vernacular has caused some confusion on planets. This obliterated the sale of 'bubbles' the children's toy made of soap due to mass fear that small children would be consumed by these toys.