[TL;DR: Some musings. Everyone is at fault.  Oh well about your past.  Eve is full of spais. Sugar shouldn't write things before bed.  This high horse isn't high enough.]

I did not realize, until we left Capital Punishment., how many people saw me and beyond myself my corporation as Capital Punishment.. Not as THC2.  Not as Sugar.  As Capital Punishment. they defined me.  People who had issues with Capital Punishment. or TEXN translated their issues and opinions onto THC2 and therefore myself even if these issues happened before I started Eve.  I’ve had some people dismiss me out of hand because of my alliance ticker and an unpleasant  interaction in their past.

As long as I carried that ticker I would receive that judgment.   Of course, it was easy to get huffy and say, "See me!  See who I am!"  Yet, I have done the same.  I asked Marc Scaurus when he presented himself for CSM8 what did his corporation and alliance ticker mean to his goals of focusing on low sec?  What burden on his time would they bear due to the fact that he was a member of the corporation.  Could he be a CSM Representative for low sec while he was a member of a null sec alliance?   I asked:


"You are a member through corporation to Goonswarm. To one, such as I, who lives in low sec and wishes to be remembered when sitting out on the back step that CCP has sometimes placed us, would like to know how that affects things. 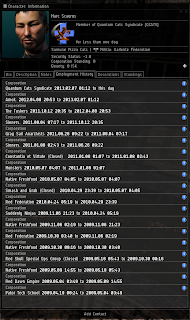 In Eve our social groups have a very long lasting presence.  We possess the ability to access the complete employment history of every character in the game.  Every time a new member comes to a corporation (that does any type of background) their history is gone over and closely as their killboards.  Why were they with this group?  That group is known for this.  This person was once a member of that alliance and well known for these things.  Be careful. Be cautious.  Double check on these things.   The Eve Corporation’s paranoia is well known and it is fed by the structure of Eve.

I don’t mean the structure of scamming and lying.  Nor do I mean the thefts and betrayals.  The structure I speak of is the single server nature of Eve where we cannot get away from each other.  History may repeat itself but it never happens a different way at the same time because there is only one past, one present, and one future that the entire game travels.

The social groups in game define so much about the player.  We may stay or we may leave because a fit did or did not work out.  Sometimes things change.  Sometimes the people change.  Corporations and alliances may fail cascade or stand up and trot off into a new direction.  Others may dwindle away due to inactivity or surge to life after a period of idle time.  Each group becomes its own ecosystem of behaviors, thoughts and opinions.

It is easy when inside of a group to forget about the rest of the game.  The larger the organization the easier it is to forget that the game is different outside of the organization.  A large group such as Eve Uni that does not promote piracy may create members that have one particular view of piracy due to insulation and reinforcement with the topic.  It would be easy for me to forget that not everyone PvPs and believes in trying to kill everything they find.  My own social circle would support that belief and lead me to a detachment from the rest of the game.  I fear for Wormhole dwellers.  I've recently learned that they rock back and forth in their pods with anxiety attacks when entering High Sec.

The thing is that I also said:


"But you are not your alliance. I assume that you know this but many people will not. It would seem odd, if I were to chase down the residents of low sec and try to explain to them why a member of goonswarm, a well known sov focused large scale warfare (I'm polite) type of group will be who and what we should be carrying the banner for in low."

With time we get to know people.  Thoughts and assumptions may change.  Or we may get stabbed in the back two years down the line.  There is no solid state.  Sometimes there is no time.  The CSM elections are warming up.  The political machine is moving and the players who notice and participate will be asked to make a lot of judgment calls and decisions in upcoming months about who they wish to be their useful/not useful/effective/lol/whatever voices to CCP.

Yes, who someone associates with matters.  It can tell of their personality and tastes their interests and focuses.  But it is easy to let those things over ride what else is there.  But then in a game composed of as much good as bad it is understandable.  Still, at some point there needs to be s feeome movement past the past. A way forward for those so described as ruined by their corporation information even if that way is paved by social understanding.

I know people have called for some way to scrub their background clean.  I don't agree with it because, like so many other things, it would become a tool of the rich and a tax on the poor.  Nor am I advocating everyone open their arms and invite snuggles from strangers (unless they are cuddly strangers).  Mostly, I have talked myself into a complete circle that leads to a spot where thousands of paths flare out in every direction.  They overlap each other and twine together until there is no neat direction but only clouded possibilities.

I don't think I have made it anywhere with these thoughts. Each situation must be worked through on its own. Everyone will find their own comfort zones.  Me?  I'll use icing to coat my soap box in Skittles.