This will surprise others as much as it surprised me, but someone tried to gank my boys the other night.

The other night, they were off having a good time like guys like to do.  Some kick ball out in the fields.  Some good times and male bonding.  It was sweet and suddenly, from the darkness, a covert cyno opened up and hot dropped blops (black ops) battleships onto my boys.

Can you imagine the shock and stress they must have experienced at such a sudden, unexpectedly hostile act in low sec?  But, brave, sweet tempered souls that they were they manned up and faced the conflict.  They decided that they would not backed own from this.  While their ships were young and fresh, only just pulled out of the corporation fleet hanger and equipped they faced down this threat.  Sadly, LR’s Talos, young soul that it was, exploded into the darkness in a dizzying splash of color and energy.  Little later, deprived of his innocence, Diz too lost a Talos.  However, the others rallied around and LR returned, naked but for the soft skin of a rookie ship and they managed to somehow stand firm. 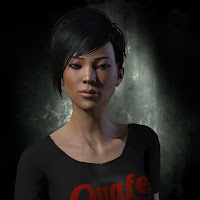 And poor Diz, dropped mid battle as he struggled to save the younger members of our corporation from this dark threat.  Can a man with an avatar this sexy be anything but gentle and overflowing with kindness?

I worry for them.  My sweet, innocents.  There are such dangers that lurk in space.  What if this widow, and that widow and that Redeemer, this Onerios, and that Manticore over there had done more harm to them?  But my boys are strong souls.  They don’t let the unexpected bad things in life get them down.  Bravely forth did they venture back into space.  I'm proud of them.  Spaceship violence so sudden and unexpected has run many a soul out of low sec.  But the boys have held strong through the night terrors and they were recovering and recovering well with minimal counselling needed and only the occasional anti-anxiety pill only for LR to receive the most disturbing eve-mail I believe he has yet received to date.

Just fyi, http://www4.picturepush.com/photo/a/12105452/img/Anonymous/hah.png
As displayed in the sreenshot above. I have set the killright to everyone in eVe free for all to kill you without concord to interupt.

If you want me to make it unacvailable to all
http://www1.picturepush.com/photo/a/12105479/img/Anonymous/hehe.png  send me 50 mill isk or be hunted for almost a full month ^ ^ enjoy.

Send from my alt RJX

And I know that low sec is a scary place but extortion?  I mean fifty mil or people will hunt LR for the next month?  Unknown people will descended upon him and activate his kill rights in low sec and cause him to never be able to undock as the slavering desire to punish him for his transgressions render his game of Eve unplayable?  LR works hard for his ISK.  When he is not giving it out to the harmless he is out and about, scouring space of the dark plague of red crosses. 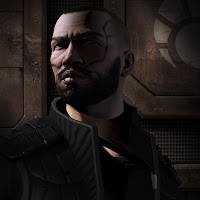 Look at this kind and pensive face.  He looks as if he carries the weight of the world on his well adjusted, compassionate shoulders.  I'm sure he was doing no more than cupping that pod in his broad, strong arms to help bring it to safety when the sheer strength of his compassionate will accidently breached the structural integrity of this pod.

Is this the killboard of someone that would do things to people that would cause him to deserve to be hunted for 29 days and 2 hours and 33 minutes of his life?

I'mm sure that LR would welcome people chasing him down every waking moment he was logged in.  It would feed the focused, PvP aggression that is his base nature.  Sometimes we can drag him off to do other things and he even grows a bit of fur now and then but at the end of the day LR is made for killing things.

People like to make threats when they have died.  Maybe it makes them feel better?  Maybe they think it will scare the group that killed them?  I don’t understand the ‘show of bravado’ mentality but that may be it as well.  They have not been defeated and they will come back and destroy you.

I stopped worrying about that rather early on.  At first it did disturb me.  My first, real credible threat was from a member of Rooks and Kings.  I happened to possess, due to my social butterfly status, a obscure piece of information I was giving him.  He thanked me and then told me that if it was fake or a scam he would war dec my corp and destroy us.  I only knew of them as a group that flew shiny ships and killed other peoples capital’s at the time and I was a bit worried that I had brought something down onto my boys capital fleet.  After I politely asked why he was threatening me with a war dec he laughed at me and told me that my corporation was too small to be of any notice.  They liked large corps that could bring a good number of ships to the field for them to record and make videos over.  I was stressed that I'd do something to upset the boys and get kicked from corp.

Most threats, such as “Then come to low sec!” I could defuse because I was already in low sec.  When I informed people of that and invited them over or asked where they were the conversations would mysteriously dry up and end.  I never threatened them.  I only used the invite as a response to a suggestion that I leave high sec and face some real danger.

Other times the threats make one raise an eyebrow.  I and/or my corp have been threatened with Goonswam and Test multiple times.  Neither of those are groups that I see giving any fucks that someone got blapped by low sec pirates.

My favorite might be the more nonspecific threats.  “My friends are going to come back and wipe you out”.  Okay.  They are welcome to.  “You won’t be able to buy a frigate once we’re done with you” along with “We’re taking over this area”.  So far, none of these have yet come through and they have often seemed like such nice possibilities.

It has left us to continue roaming the darkness looking for these fights.  They keep not coming to the undock.  The one time I have been camped into a station there were 14 of them in sniping ships and two of us.  Ender’s response was to undock carriers and drive people insane.  Me, I went and did other things. Oh yeah, there are the groups that leave AFK cloakers in system as well.  I ignore them.  I fly defensively. If I die I die but I’ll be damned if I’m not going to do anything because they are around and I might die.  At some point that has to be accepted and for me it’s when I buy the ships.

So far, having my kill rights available to the public has not brought down legions of hunters to shatter my spaceships into a zillion pixels   If LR was not -10 I might understand.  However, he is -10.  That makes him an open target to everyone in every security section of space.  Gateguns will not assist him.  Faction police will try to kill him.  High Sec gates will make that irritating announcement about an enemy of the whatever being in system.  However, I'm wondering if I should inform his Extortionist that Concord does not spawn in low sec to interrupt fights.
February 04, 2013