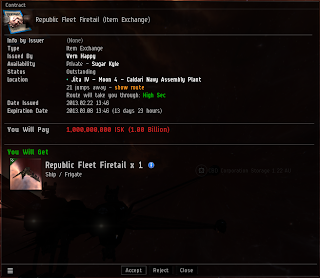 I will indeed get a Republic Fleet Firetail.  I will also pay 1 billion isk (Sugar currently has 17 million in her wallet) for this ship.  The person is not Somer Blink.  And..... I did not accept a Firetail for the blink that I played recently.  I did win one and cashed it out for ISK.  I love the fact that the accept button is automatically highlighted.  I rejected it.  I even read the contracts I am getting from people giving me free stuff twice.  Just in case.

As I understand it CCP did all sorts of terrible things like making the you will pay line red and the you will get line green so that people would notice these things easier.  It seemed that the game ended along with the world.

Not every scam is a major bank heist  or an alliance theft, or a wormhole clean out.  A lot of steady, scamming happens every day in the most populated places in the game.  The trade hubs.  Jita is king for this.  There raw ISK flows like milk and honey.

I was in Jita a little while ago looking at the various contract scams that are in place.  I took a few pictures of one that made me laugh.  Mixed with my scam contract attempt above and it makes for an amusing topic.  There was a time when I wondered how people could spend all of their time spamming local trying to pick up easy marks.  I've come to understand the power of the idle station alt and the sheer mass of people moving through that system every day.

Because of PLEX, Jita is ripe for the pickings.  New players buy PLEX to get themselves some spaceship funding.  They are the focus of many, many scams.  However, older players fall for them as well.

Scams are a trademark of Eve.  It is a career path for some.  As someone unable to sell water to someone dying of thirst in the desert, it is not a life style that suits me. But for those that can talk water out of that same person dying of thirst, scamming has a lot of income potential.  There are simple scams that prey off of the innocent and more complex ones that play off of greed.

Before you start browsing scam contracts to admire the creativity of other players I advise you do it in an account with no ISK in the wallet.  A single misclick can cause a rather painful whoops.

I do read Jita local.  Not as a lifeline but as a habit.  My local window is an independent window and the flicker of it grabs my attention. I don't turn it off because it is Jita.  I'd prefer to deal with the spam and not develop a bad habit later down the road.  This was a somewhat quiet day without the normal war between the spamers and the screen cleaners.  "Rare" caught my eye and immediately sent up a "bullshit" flag.  Things are rare in Eve, sure, but other buzzwords would be use such as "officer".  Plus its Jita local so I already do not believe anything that I see. 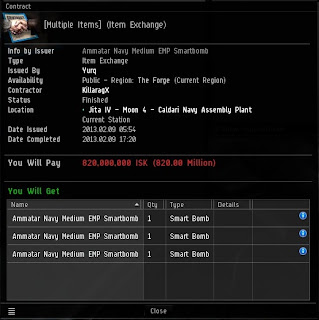 Ammater?  Ammater is a faction of Amarr that occupies Derelik.  I know about them because I lived down there when I started and missioned for them.  When I was eventually introduced to the concept of loyalty points and what they did I learned that they were a rather useless faction to mission for as such things go for a newer player.  The other interesting thing about them is that because they are out in the boondocks the faction name will not be familiar to many people.

Did I mention that the advert in local and the contract are by different people?  And this contract is fulfilled (maybe by a scammer maybe by a scam victim).

Players are focused not on the actual items name but on the pretty symbol in its upper, left corner. 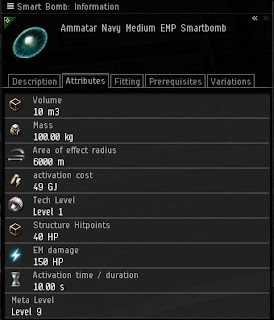 It's a smartbomb. I don't know how good of a smartbomb it is.  I am willing to doubt that it is 273 mil (820/3) worth of smartbomb goodness.  This is also Jita. Everything is a lie there more so then anywhere else.  I decided to look on the market to see where the scam was going. 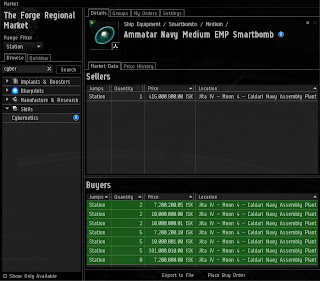 I'm not a market pro.  I may be wrong about how this goes down but this is my interpretation.

What I see here is a lot of misinformation.  What someone else might see is a profit.  I'll point to two sections.  The first is that there is only 1 listed for 415 million.  This hopefully instills a sense of 'this item has value' to it.  Instead, it is the scammer listing the item themselves.  The buy orders are not matching it but buy orders are normally low.  However, there is one buy order for 381 million.  and it wants 5 of them. I didn't check to see if it had a minimum order amount.  Sorry about that.  Still, two things will happen.  1, the buy orders will fail because it is a Margin Trade Scam set up by the seller of the contract.  Two, it has a 5 order minimum and you need to buy six of them from him.

I suspect it is the first.  You'd think you can make a nice profit of 323 million if you buy the contract.  That's why its a Margin Trade Scam.  The order won't fill and suddenly you are stuck with three overpriced smart bombs.

But they are listed for 415 so they will sell?  Right?  The other buy orders are just low ball attempts to catch idiots selling this valuable item.   No.  Not really.  This is why the price history tab is so important when looking at this stuff. 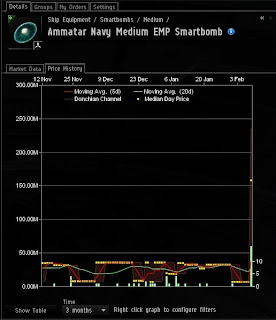 At the bottom of the price history window you can change the date.  I selected three months.  Gee.  They have not sold for over 50 million in the last three months.  And this is why some things are too good to be true.  The scammers function off of greed.

A tiny bit of sense mixed with a little bit of fact finding goes a long way.
February 23, 2013