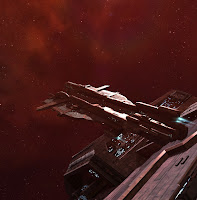 My first venture out in my carrier was a grand, majestic undocking on the test server.  My Thanatos soared out of the station and into the depths of space.  I then decided I would take a leisurely swing around the station and turned the ship.  A few minutes later it started to turn.  Ever so slowly.  Ever. So. Slowly.

I wasn't sure if the recent test server mirror was close enough to capture my recent entry into capital ships.  I was fortunate that it was.  This is the first time that Snowflake has been undocked since Ender went and picked him up back in June.

At the moment, Chella is training her jump skills.  The navigation skill tree is a very simple one.  It contains a handful of skills and once they are all learned they are all learned.  A large selection of these skills are for capital ships and capital ship jumping.  These skills extend your jump distance and the consumption of fuel when you jump.  All important and useful things.

The skill changes that are incoming with the summer expansion condenses capital ship training and readjusts the prerequisite skills.  Before, the long slog was for things like Battleship V(trained to level 5).   Once you did all this training and spent months waiting to sit in the hull you often had to turn around and train the navigation skills before you ever undocked.  Now the navigation skills are tied into the new, future prerequisites for the ships.  Some people hate this some people like it.  I think it makes sense.  At the same time it was always amusing to see someone find out that they might have this large, lovely ship but they could do almost nothing with it.

With the new skill changes that are coming I decided to change my plans around.  The new changes will make it easier to get into capital ships.  I will not have to learn Battleship to V to get into the various carriers I want.  Therefore, I turned around and remapped into Navigation.  The Navigation skill tree is relatively small.  Once it is done it is done.  With Jump Fuel Conservation and Jump Drive Calibration burning to level V I am set until the patch.  Then I will switch to drones and hopefully figure out more stuff after that.

For now, one day until Jump Drive Operation V finishes.  This allows me to do Jump Drive Calibration up to IV and with that I am set to do the bulk of my moving by myself.  It will also position Chella to install Gallente Freighters and Jump Freighters.

And then there are command ships.  On my way to these other things I am taking the quick side path of learning Leadership V, Heavy Assault Cruisers IV and inject Commandship.  This way I will not have to learn the new leadership tree if I do not want to once the changes come in.  It is a situation of "plug in all the skills" before they change them.  I will be combing through my lists and cleaning up straggler skills.

A reminder to those who do not read Dev blogs: They are restructuring everything. A side effect is that many people would be stuck in a position where they could not move forward until they trained catch up skills.  They are not handing out skill points for anything but the racial destroyer/battlecruiser split.  In the discussion about the Dev blog it looks as if CCP is backing down on this and adjusting it so that a skill plugged in can be trained.  This will prove to be an interesting boon to those that lose skills due to lack of upgraded clones.