Bringing Caps to a Cap Fight 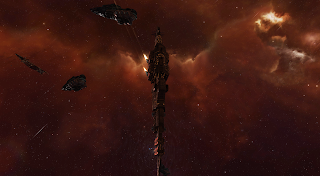 I watch the boys kills tick up over the course of the month and sometimes it leaves me wondering if I do enough.

Doing enough is an age old problem in Eve.  People are often judged by their kill boards as a rating of their activity.  This type of simplistic measurement has been detrimental to people flying logistics ships.  We've asked CCP many a time to put our Logistics ships on the kill mails.  Not only will it let us see what really happens in some battles but it would provide the logistics ships with more presence in their part of the fleet and decrease the need for whore guns and whoring drones.

(An aside for the non Eve Lingo Savy: A whore gun is when a logistic ship fits a weapon instead of {possibly} another repper to give targets a token shot to get on the kill mail.  I've heard rumors that some corporations require this to count logistic participation and to make sure everyone had proper killboard numbers.  Similarly, whoring drones are when there is one lone combat drone used to apply a spark of damage and again, log the logistic ship on the kill mail.)

Happily, I do kill stuff sometimes.  Of late, the boys have half moved into Bosena.  It is keeping them occupied since Bosena is a high sec to low sec gate.  Deeper in low sec you get fewer adventurers.  Plus there is this group that is trying to move in and they want to fight.. they've even dropped cans for can flipping but that's another post... So they are killing all of the things and I hang out sometimes to work on my tackling.  The side effect is that I'm starting to have stuff all over the place.  Home, Bosena, up with 7-2, another base I happen to have...

Anyway, the other night we were hanging out and 7-2 drops in and asks us to come tackle a dreadnought for them.  Okay! As 7-2's devoted camp follower I am always thrilled to be called upon.  Yay tackle! I can do that! We undocked, switched coms, and ran for the system where there was a small POS bash going on.

They have a warp in that accidently gets himself uncloaked. We're told to go and get everything held down while the cyno is landing.  The sneaking and waiting turns into a full fledged mad dash across a few systems to try to grab their ships before they can bail them out. I managed to enter the fray late which saddens me.  Two of our pointing ships went down as I landed on grid and everything else warped off but the dreadnought in siege. 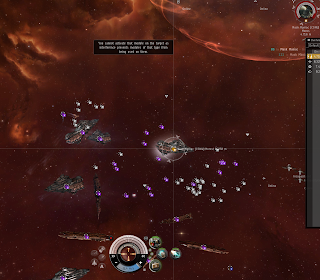 At this point he is melting and I'm spamming my point in case he comes out of siege so that he can't jump.  I've switched off my MWD and I'm lazily swirling around him.  Click, click, click goes my point.  He doesn't have me targeted, he probably can't even target my Jag spinning around him.  I'm pretty sure I have the wrong ammo loaded because I got so excited I just ran for it and well.  really... I'm in a frigate and that's a dreadnought.  I'm not really there for DPS.

He goes down.  Our dreads make sure they are on the way to coming out of siege.  We get everyone situated and get the dreads then carriers off the field before the subcaps go.  Everyone warps to the station, the capitals cap back up, out cynos are lit and everyone leaves.  But in local...

There was a fleet with capitals and subcaps shooting a POS.  It is a rather juicy target. Capital ships are not well known to blow over when looked at funny.  That particular Moros absorbed 834,810 in damage.  When dreadnoughts shoot things they normally go into siege which immobilizes them for five minutes.  They are stuck there during that time.  The reason to drop many dreds is to kill the ships fast and get out fast.  It's a drive by dreadnoughting in a way.

I've been on the killing side with a subcap fleet. It takes a while.  That is why they used to just self destruct.  Rarely could a regular, roaming small-gang (pirate sized) fleet take out a capital ship fast enough to beat a self destruct.  The old self destruct meant that you didn't get a kill mail.  Now you get one so there is no longer any reason for them to self destruct.  It is always to much for someone.  I understand (if not agree with) people disliking introducing capitals into a subcap fight. I'm a bit more puzzled when it is a complaint over introducing capitals to a capital fight.  "To many, bring fewer."  Okay.. sure.. fantastic idea.  Then we also get hot dropped by a third party while honorably brawling our dreadnoughts.  Best idea yet.  Have some skittles.

Anyway, we left system.  Then someone wound up in a random fight on a gate that we jumped through to assist in.  One by one they warped in and died.  It was interesting.  They suggested that their "one by one" tactic wasn't the best they had come up with.  That was agreed.

But I was happy enough to have four kills, with one a capital kill, to start off the month.