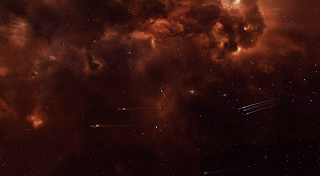 Taking pictures of frigates is hard.  The size of the ships means they are a point emphasized by a brilliant engine trail.  When still, I might as well take an image of space, but in movement, as the ships swirl about each other in a complex web of speed and light the images change.

A T1 frigate fleet was very appealing.  The concept was around DPS, logistic frigates, e-war frigates and a snarling little pack of repairing fury to kill things.  As a long time admirer of the concept of tiny ships giving the death of a thousand cuts to larger ones, frigate concepts like this are exciting for me.  The price tag makes them even more appealing and gives the FC more comfort in sending the fleet into fights.  These types of fleets are also very engaging because they have a low entry barrier yet put a bunch of experienced pilots into them and it becomes something that may worry people.  Yet, it is a bit more engageable then a T1 assault frigate fleet.

I did learn that when you put a bunch of flashy red pirates into t1 frigates and run around with them, people will still run away.

I like middle of the week fleets.  As someone that works every other weekend, fleet concepts done outside of the normal weekend plans are highly appealing for me.  I miss a lot of fleets on the weekends.  This was planned for an hour after I got off work.  I had moved my supplies the night before so I logged in, jump cloned, and started putting my ship together.  People started to trickle in, things were randomly run out of and an hour later with many disconnects, people arriving, sudden ship trades we managed to glue together a fleet that mostly fit the original planned composition.

Our little armor frigate fleet wound up composed of, 6 Incrusus, 2 Crucifiers, a Maulus, 3 Navitas, a Rifter and a Wolf (because that's all we had at the last minute ready for him).  Set and ready we undocked and exploded into space ready to claw something to death.

Space was not in a giving mood.  We had some restrictions.  Attacking everything we saw wasn't going to work out due to frigates + gates = blap.  This meant a lot of neutrals went by and we stared at them.  After a while, irritated by the lack of flashy red targets or people willing to engage our frigate blob the FC decided to see if we could lure a flashy red group out to fight.

There they were, on the station.  Stabber Fleet Issue x3, Vigil, Rupture x2, Maller, Slasher, Thrasher x2, Oracle, Atron, Arazu.  We sat 100 off the station and then warped to a planet.  They asked us not to leave but did not come to the planet.  We decided we'd try again and warped back at 100.  They reshipped to sniper battlecruisers.  We warped off, they again reshipped kinda (I think) we wound up going to a gate where they also landed.

Then we played gategames while we attempted to rebalance the range.  We were a short range slow moving brawling fleet.  We did about three jumps back and forth and then things got weird.  Another group landed as well and kind of teamed up with us (I think?) and the group wound up bailing and we suddenly started killing cruisers and thrashers and in the end stuff died, none of us were hurt I have no idea who we were working with and we got called names for running away too much.  They didn't want to engage a T1 frigate fleet.  Much name calling can go back and forth for this.  But that is how it goes.  Try to insult people into making stupid decisions. 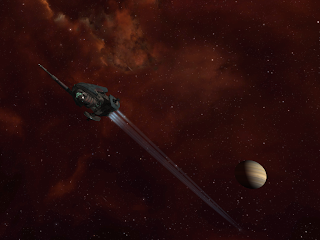 Eve can be confusing for the little F1 grunt in the middle of the fleet flying her Incrusus around in circles.   But we had killed things and come through alive!  It was very exciting.  It was one of those moments where everyone pats themselves and realizes that they are fine.  At least I did.

Our next little match turned out to be a group on one of the faction warfare complexes.  They had a Talos with them.  What we did first was warp into the complex and hope they would follow and leave their Talos behind.  The answer was no.

So, we warped off and came back and decided to take the fight.  That fight turned out to be quite interesting.  They scattered in all directions we did more of a focus fire thing.  Whenever they came in range we webbed them down.  The logistics frigates did an amazing job and kept everyone up.  We killed the Talos.  Death by 1000 cuts accomplished.  Someone had a MWD (microwarp drive) instead of an afterburner and managed to burn out and catch their logistics frigate.  Once that was accomplished we managed to kill it and they decided that they were done.

Frigates on the field!  An interesting adventure that wound up taking quite a while to accomplish in the end.  I looked at the clock and it was 2200 and I hadn't even made dinner yet.  Whoops.  Still, it was a lot of fun and it was different.  Time in frigates in invaluable to me.  I'm still adjusting to the slowness of armor ships, especially armor ships with an afterburner on.  I can't say that I care for it as something that makes me all tingly but I am coming to appreciate the value of them.

Then later, I managed to convince a guy in local that the reinforced POS in system was mine and that 7-2 had reinforced it because I wouldn't do as they told me to.  He suggested that I get my stuff out and I'd only lose the tower. I told him that I was to poor to lose the tower and start over again and that 7-2 had destroyed all of my haulers and camped me in station.  He was kind enough to offer me his badger and give me advice. He was leaving the system because it had gotten so busy and he no longer needed it.  I thanked him and we discussed some more things.  He gave me the badger, I thanked him again and now I have a badger with a cloak to rescue my things from the evil likes of 7-2.