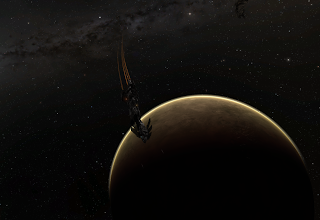 This is a Vagabond.  I flew one last night.  It was also the subject of a major campaign, headed by Rixx Javix after CCP removed its solar panel frill a patch ago to return it to its glory.

After my adventures in losing tiny ships to unexpected situations, I laid down on the floor of my hanger and thanked various deities that have to do with the loot drop percentages that I had made it to my goal.

My jump timer had cooled down but I was invited to do something that maybe had something to do with a Dominix in the next system over.  I undocked in one of my armor Hurricanes that I have down there.  The situation with the Dominix did not manifest and they decided to do a little roam around the area to find trouble.

It seemed like a good time to just tag along.  The problem was they were looking at shield ships and I only had armor ships.  Damn it.  When they asked if I was going along I said, boldly (for me), "I'd like to but I do not think that I have anything that fits your comp."  Instead of telling me, "Oh well, to bad so sad," they were wonderful and offered me spaceships.

Then someone traded me a Drake.  I cancelled the trade.  I can fly a Drake to the extent that I can activate the spaceship and undock in it. I can not use any of the weapons systems.  I can also fly an Oracle but again I cannot use the weapons systems.  The Vagabond was an option. I was rather sure that I could fly one but I never had.  A moment to check the prerequests and yes, I could indeed fly a Vagabond.

"I can fly the Vagabond," I said.  I was traded the Vagabond.  I looked at it. It's a spaceship.  Only, its fit was tight and I had an offlined medium neut.  A few switches with some shield extenders and invuls and I was set.  Then I received instructions about flying it.  I was pretty sure I understood what they said and decided to offer up some information.

The bad part about T2 ships is that they are expensive.  The Vagabond is selling for about 150 million.  The normal practice when someone lends you a spaceship is to repay them if you lose it.  I can afford 150 million. I'm just whining.  I am happy that someone offered me a ship and would not think twice about paying them for losing it.  I then received some advice about cap usage with it and off we went.  Wee!  I had planned to jump clone up and play with the boys.  However, I'm now a bit frightened of the land of the smartbombing Raven.  Not really, but he is going to be super annoying if this is his thing.

Off we went back out.  Therewas a Naga and something else running around.  The Naga wound up jumping with half our fleet.  The other half stopped and waited.  On one side they aggressed the Naga who went for the gate.  On our side we went after him again.  He tried to gatecrash but Firebolt slammed into him with Tengu power and threw him off of the gate where he then died.  Firebolt then said peace out and went to bed.

These roams with 7-2 are very good for me.  It's null everywhere when I roam with them.  Bubble avoidance  tacticals,  all the stuff I know but don't have to practice now I have to work on and work with.  I'm still a bit unsure of myself.  I enjoy their fleets but I don't yet have the smooth working relationship that comes from fleet after fleet with someone.  As long as they let me stick around I'll work on developing that. 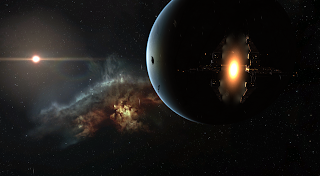 It is really very pretty out here.  The nebulas are off in the distance and some of the landscapes are just stunning.  We were heading back and I was admiring the scenery when the scout said a Prowler and Viator where jumping into us.  "Kill it if you can catch it," said the FC.

Haulers are such appealing targets.  Blockade Runners, also known as Cloaky Haulers, are hard to pin down.  They can cloak.  The cloak alone is not the redeeming feature.  Anything with the space can fit a regular cloak.  Blockade Runners can fit Covert Operations cloaks which allows them to warp while cloaked.  Plus, their stats let them align like a frigate or cruiser depending on how they are fit.  Therefore, by the time you hit the area they cloaked at to maybe decloak them they have entered warp.

That means we become reliant on pilot error.  When the two decloaked we tried to point them.  The Prowler warped off.  The Viator, not so much.  Pointing a blockade runner is a "holy shit!" moment because you fail 95% of the time.  Blowing up a blockade runner is satisfying   Pointing his pod and blowing that up is like a second serving of ice cream.

I remember there was a time when I didn't want to pop pods.  Times do change.

The Viator was full of compressed ore.  For a moment, we thought that it was super valuable.  Valuable enough to get a hauler to pull the loot.  After a bit of research we realized that it was a nice little chunk of ISK but not the billions that the various scam contracts make it out to be.  Oh well.  We popped the wreck and moved on.
January 08, 2013