Salsa, Jaguars and Drugs: A Day 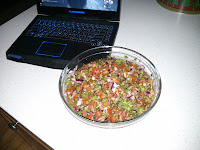 I was on my laptop today while I was making Salsa.  Salsa is a long project involving much chopping of vegetables into very small pieces.  The end results are delicious but it takes quite a while to do.  This is a moment when I use Eve as a chat program.  Chat, chop, chat, chop. It gets me through the grind of mincing an entire bowl full of stuff by hand.  I've tried some of the quicker methods but they tend to crush and squish.  A sharp knife is an amazing product.  The countertop is quartz so photographs a rather vivid white.

So, there I was, making what would become a delicious bowl of salsa when I saw an unexpected message pop up on my character sheet upon login.  I had unallcoated skill points.  Wat?  When did that happen?  Why would I have unallocated skill points?  Why had I not noticed it before?  I can and am often oblivious to many things but this isn't one I thought I'd miss over a long period of time.

It turns out I did miss the announcement about it. I'll blame working and being oblivious.  However, I have never seen the notification pop up before.  Normally my notification pops up to tell me how many certificates I have never claimed.  I realize that I've been opening my skill queue from the blue status bar on my NEOCOM.  I have not accessed the skills through my character sheet and thusly missed the change.

Oh well.  It will get me that much closer to using medium T2 hybrid turrets.  While I was examining this interesting thing, I was contacted by Alex of RANSM who was looking for a few people to go and crash a POS bash he had found.  Alex flies Jaguars so I immediately offered up a Jaguar to the cause.  He was pleased and after a bit of searching we wound up with a fleet of 3 Jaguars, an Omen and a Thrasher to go and break up the POS bash.  R1FTA pilots are always willing to join in.

The POS bash was composed of 4 Abaddons, an Oracle, a Tornado, a Rokh and 3 Stealth Bombers.  Our mighty fleet met up two systems out.  We were a group of local pirates drawn together by the power of the Jaguar.  The goal was to kill the Tornado, not die to the Vagabond and if any of us were left we would then run away.

We got a warp in and jumped into the system.  We landed on grid just as everyone warped off.  Damn.  After buzzing around a little bit they reshipped to 3 Vagabonds, a Cynabal and a Punisher.  That is much frigate eating power.  So we left.  They landed just as we warped off.  Then they switched back to their POS bashing fleet.  We came to visit again.  They left again and switched back into their frigate eating fits.  This time we stayed, they came back, and we were mighty until we lost two Jaguars and the Thrasher trying to take down a Vagabond.  The Omen got out in structure and I managed to burn with my MWD capstable Jaguar powah out of point range.  I got to taste a 30+ km point but Jaguar "RAWR!" and I burned out of point range and warped off.  We killed nothing and lost three ships.  It was hysterical and a lot of fun.

All warm and fuzzy, I went to settle back down and somehow wound up connected with a low sec group that lives up in Faction Warfare space that was in need of drugs and enrolling one of my friends.  I managed to completely fail to put the drugs in my cargo first delivery attempt.  However, the second try I figured that complex maneuver of moving the item into the ship I was flying and delivered drugs, received ISKies and made new contacts.  I then moved into their chat channel and planted myself to make friends.

I've spent most of my day trying to build a website for my new domain.  This blog is going to remain here but will eventually redirect.  Once it is done, no one should notice the change unless they look at the address bar since blogger will still be hosting the actual blog.

I did get to see the most interesting situation where NC. and PL dropped, at the same time, on a small group bashing a POS.  I kind of feel bad for them.  That is a whole lot coming down on one small groups heads.

But now the servers are going down early so that Dust 514 can be fully ported to the active version of Eve Online.  Interesting times.  Will the (Eve) world change while I am asleep? 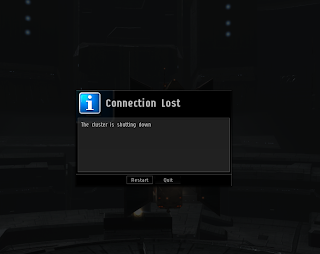