Have Suitcase, Will Travel 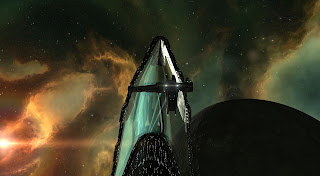 In the beginning there was rookie ship.  This was good.  And there was much rejoicing as the rookie ship took flight into the void.  And so sought the rookie ship adventure and experience in the darkness.  He did roam the space lines, quick and agile.  And as he matured so didst his knowledge. He found himself expanding and becoming more.  No longer did he fit a mining laser and a civilian blaster for he had learned that two rails make more sense.  One type of ammunition was used and the stoic pair of drones followed along, equal partners in the achievements of glory.  And thus was advancement achieved. To the Atron and Catalyst did the rookie ship mature.  From the phallus imagery of the Thorax through the awkward shape of the Myrmidon.  And the drone knowledge didst expand into more.  For there was now five companies to warm the void with friendship.  And even they advanced, their form encased in the second state of technology.  Forwardly focused and henceforth known, said gentle being transcended once the healing knowledge of mighty Potato was known and did sprout a vast form, both flat and new and curious in its shape. 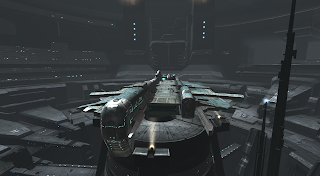 For those that dislike capital ships, I have become part of the problem.  I'm happy about it. A path started by one conversation has finally had the frame work completed.  Fortunately, for many moons I will be an insignificant part of the problem.  I have a poorly skilled, barely able to fit into the ship, carrier pilot.  I am very excited but at the same time acknowledge that it is the start of a very long road to becoming a well skilled carrier pilot.  But I have this now.  It is a strange thing, to spin this around in my station.  While I have this thing, I have had it for seven months.  I have also not flown it and I will continue to not fly it until the time comes to fly it.

My ramblings often cross over the realms of fitting ships properly and flying them properly and not rushing.  Why?  What value does having this ship gain me now that it did not before?

It is a suitcase.  A poor mans jump freighter.  The value is independence of moving.  I can now move my entire home base around low sec by myself.  With my alts.  But they are all me so that counts as me moving by myself with me, yes?  Instead of trying to move a dozen ships around one at a time I can pack them all up and move to wherever we are going.  Like my Orca is a mobile mining station the carrier is the exact same thing here.  The suitcase use of carriers is why so many kill mails sport massive holds full of random things.  A carriers hanger is a lot like the trunk of a car.  People forget to clean them out.

I have a logistics bent to me.  I enjoy the non spotlight site of doing things.  Logistics ships (repair), logistics ships (moving), managing resources  building my boosters, helping people out and in general puttering around in my bathrobe and slippers in game.  However, part of my maturation is not relying on others as much and at the same time becoming a more valuable asset to those people.

We start Eve small and confused and our skills suck and we don't know what is going on.  Being taken into a good corporation is a lot like being adopted.  I'll never forget the day Diz said, "Are you shooting it?" At the time he was teaching me how to rat.  I was out in a T1 fit rupture and I barely scratched the thing.  The NPC frigates almost killed me.  Everything was large and terrifying   Yet, I believe that hand holding he gave me has started to and is paying off.

This is an end result of care of a new player.  I've gained a tremendous advantage because of it.  It is one that I attempt to pay back as I can.  However, of late I have come to realize that not everyone should raise new players.

If you find that you abandon newbies a lot and they quit, if you get bored and change your mind and run off to do something and leave them alone, don't adopt them.  Send them somewhere nice, a foster home and keep them in a social chat channel.  Don't use them to forward your own goals and needs and wishes to have an apprentice or a disciple and then leave shattered 3 month old players in your wake like toys broken from boredom.

Age is an integral part in our communication with each other.  "You are young," is very true.  The time application of the training program causes a subconscious conversion into our normal social connection in relations to age.  Kinda.  That sounded cool.  But to get on with it, when MacG and I call Ender "Poppa Ender" it has an undercurrent of truth in our relationship.  It also means we get to have an excellent and exciting teenage rebellion phase. I think I had mine over the Tengu thing.

I have been fortunate enough to have adults to guide me and hold onto my hand as I rampaged back and forth learning the game.  I've known them for a year and I'm thankful for the time they have put into me.  Its been a long goal to raise me and often a group effort.  Other players are time sinks.  Running a corporation is a time sink.  Helping new players is a time sink.  That is fine.  But if someone does not have that time to give I wish they'd not pull them in and then let them fall as get bored and walk away.  I understand life happens.  I don't speak of that.  I speak of the ones who never last in an effort longer then a few weeks or maybe a month but can not resist the desire to have their own personal flock branded with their opinions and repeat a cycle over and over.

For anyone else who is willing to take a few deep breaths on the grumpy days, raising a newbie can pay back one day.  To practice my suitcase jumping I'll practice with it on the test server once they reimage it.