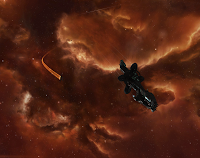 This post is an idea.  I hate having and suggesting ideas because they are normally terrible.  I decided to do so today.  It may be terrible.  I have forewarned.

I've been thinking about gate camps.

I'm not going to write a gate camp guide.  There are several excellent ones out there.  For me, gate camps are a part of life.  One I try to mitigate with ship choice and scouting.  They are a common enough part of the landscape that most residents zip around in shuttles and rookie ships without thinking twice about it.  Because campers tend to favor systems for various reasons, it allows us to have the refreshing wakeup call of things like the smart bombing Raven that killed me the other day.

It is the view of gatecamps I am looking at.  What separates residents of non high sec space from high sec space when it comes to camps is experience and expectation.  The first thing is panic.  While I totally get an adrenaline dump when I land on a fleet on a gate I know in the back of my mind how I am going to deal with it.  Sometimes dealing with it means I'll die.  I like saying that just because we have options does not mean that they are all options that will make us happy.

But the first time someone tends to die in low sec it is because of the swift, unexpected violence.  Even if it is expected it is still unexpected.  And it is fast.  They go from protected to punished and in that confusion the natural defense mechanism is to avoid the bad place.

Let speak about Molden Heath for a moment.  Teonusude is a sweet little system.  It is a 0.6 system that sits amid a little group of 0.6 systems.  They connect to the Hemitar Region.  Teonusude has an ice belt.  The systems around it also have many belts.  It is also an agent heaven.  Multiple agents of each security level are clustered here.  It is only a few jumps from the trade hubs at Rens and at Hek.  It has not one or two but three entrances side by side to the low sec Molden Heath loop which spirals out with two Null Sec connections and Low Sec connections into Metropolis and Derelik.  It is a nice little area.

Being so agent rich and tucked up against a low sec system, mission runners are sent into the low sec pockets.  There is also a five system high sec pocket only two jumps from one of the mainland empire gates.  The thing is Molden Heath is rather pirate infested.  It is not one of those little quiet pockets of low sec where no one lives.  The positive part about the activity of Molden Heath is that gate camps rarely last long.  The local residents enjoy breaking them up more than they enjoy making them.

Are gate camps bad?
No.

Do they stop people from leaving high sec?
Yes.

Does yes mean they should be removed?
No.

Their existence is an excuse.  A fear that they can point to.  If they were removed and the ability to camp gates or even fight on gates removed people will find another excuse such as, "They can scan me down and come find me."  I read one proposal on the forums where the poster wanted the mission pocket to be an isolated instance to make the mission runner safe.  The only time the pirate would have a chance at them was when they were... I'm not sure but not anything that they can currently do.  The other popular 'fix' for the non-problem is to up gate gun damage so that they will blap Titans and planets in one shot...

Every time our fleet stops on a gate we are called a camp.  We are not camping.  We are waiting for someone to catch up or intel to filter back.  Yes, we will try to kill anyone we come across.  That, a gate camp, does not make.  So, I'm not going to walk down the line of "there is no problem deal," with this one.    The fact that people gate camp is not a problem.  It is a viable technique.  I read a discussion a few weeks ago that changed a lot of my viewpoint about bubbles and bubble camping.  I still hate it but I have a lot more appreciation for it.

It is not that I want things to change. I do not. With all the current uproar my mind is just flitting about thinking about what if changes have to be suggested?  It is a delicate subject and I feel it hangs in an unsteady balance.  I don't want to be hit with the nerf bat in a way that makes no sense to anyone that lives inside of low sec.  A major complaint I have about low sec suggestions is that they too often come from people who do not live in low sec or want to manipulate low sec to their own personal visions or come with preconceived notions of low sec that are wrong. Instead, as a resident who fights on gates and attacks people on gates and has been killed by camps and fleets on gates I have heard one solution that doesn't seem overly world breaking.

The idea I'm tossing around is: What if the gates from mainland empire into low or null were regional gates.  Of the three gates from high sec into low sec in Molden Heath all of them are small gates.  This makes them very easy to camp.   The high sec pockets should stay as they are.

Gates come in three sizes.  Small, medium and large.  Large gates are hard to catch people on due to the probability of where they will spawn.  They often call for specialty ships with extra long points and webs on them to stop and slow the target long enough for the fleet to attack them.

This is just a random idea that's been kicking around for a bit.  I live around half a dozen jumps into low sec from high sec.  My system has two gates. One is a small and one is a large.  We regularly fight on both. From the Wiki on Stargates:

There are five different types of gates in New Eden, designated by location and differentiated by size. They all share the same function of transporting sub-capital ships from one system to another, regardless of physical distance between them. Each empire has its own gate design.


I don't know.  Regional gates are a pain in the butt.  You can still catch people on the next gate.  You can still catch them at the stations.  The gate size system is something we deal with normally anyway.  It still allows people to die from chance and mistakes but removes the safe because of gateguns aspect and puts it more into the hands of both side of the engagement.
January 19, 2013

August 08, 2015
[15:32:10] Trig Vaulter > Sugar Kyle Nice bio - so carebear sweet - oh you have a 50m ISK bounty - so someday more grizzly  [15:32:38 ] Sugar Kyle > /emote raises an eyebrow to Trig  [15:32:40 ] Sugar Kyle > okay :)  [15:32:52 ] Sugar Kyle > maybe one day I will try PvP out When I logged in one of the first things I did was answer a question in Eve Uni Public Help. It was a random question that I knew the answer of. I have 'Sugar' as a keyword so it highlights green and catches my attention. This made me chuckle. Maybe I'll have to go and see what it is like to shoot a ship one day? I could not help but smile. Basi suggested that I put my Titan killmail in my bio and assert my badassery. I figure, naw. It was a roll of the dice that landed me that kill mail. It doesn't define me as a person. Bios are interesting. The idea of a biography is a way to personalize your account. You can learn a lot about a person by what they choose to put in their bio
62 comments
Read more