It is funny, as I watch this battle going down and ships are being destroyed left and right that the sheer beauty of some of the screen shots take your breath away.  I don't know who took it, I'd love to give it credit.  I saw it copied on one of the live feeds and it has traveled across the chat channels.

While we mostly watch Eve from a distance and the brightly colored pixalted boxes mean a lot to us, the moments where we can truly absorb Eve's imagery are wonderful reminders about the lovely aspects of the game. 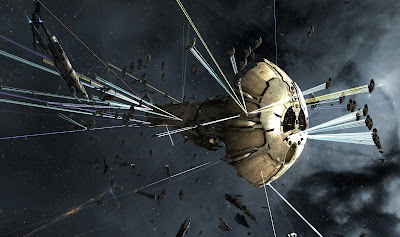 Eve is full of historical moments.  Random incidents that spark a massive surge of player interaction.  These things happen because we are all in the same place.  People will talk about the mess in Asakai for a long time.  Battle reports, reviews, and stories told over a pint will whisper through the game.

I watched.  I watched for hours.  I also roamed during the time.  We killed a lot of things as we kept track of what was happening only a few jumps away.  "Are you going to go?"  "No, I'm just going to watch," and I did, we did.  Plenty of people went.

I managed to settle into a live stream run by Shigsy.  I'm not one for live feeds but this is one of the few times where I am happy to watch something.  The chat was interesting.  People who have never watched Eve came into the chat room to find out why there was an Eve stream on the front page.

Others asked why it was so interesting.  Why did we care that the ships were being blown up so much to stop and watch what looked like a big, immobile blob of ships.

"Oh.  Wow."  People responded.  Trolls popped in and declared the game to look boring.  Many others were fascinated as people did their best to explain.  "These ships can 'teleport'" they said, "and 'teleport other ships'" and "mistakes were made".  I watched Eve players break down the concepts of Eve into simple terms and step from their high horses and use analogous descriptions closer to fantasy MMOs to people who might be interested in Eve.

These are the things I like most about Eve.  The intangible strands that tie the game together.  For hours we watched spaceships burn and explained to people why the spaceships burned.  People sent out their pings and made phone calls and sent out e-mails and text messages.  Thousands of players responded.  More people then could fit into the system.  Mobilization was enormous and it did not stop for hours.

The scale is fantastic.

P.S. At least we did not have to explain why this ship looked like a violated umbrella...
January 27, 2013