I  received an eve mail with a link today that said I missed an amazing fight and therefore an even better story last night.  It is true.  I did.

I'll put the battle report here for those that wish to see it.  It is rather impressive and obviously a lot of fun.  My only excuse is the simple fact that I was tired.  I'm an old woman now and after being awake for 22 hours, 12 of which were me being at work, I'm tired.  I'll admit to my weakness and move past it.

We started with a corporation meeting.  But as often happens our attention quickly wandered off topic.  Lue and Diz had a Megathron slugfest which we watched.  Then Ren kept egging me on to point Ender who almost popped my Interceptor.  Mutter.  But it was Razor saying that the group next door had a gatecamp up with only seven ships and two Guardians that got everyone's attention.

My opinion and Ender's were that the other two Guardian's were just docked.  Razor insisted that they only had ten people logged in and nine were in space.  Ever the opportunist  Diz put a comp together and we attempted to go jump their gatecamp.  We did not enter the system in mass but entered with five of the ships we had on the field.  They immediately logged in two more Guardians and we were faced with the same situation we are every time we face them.  Four Guardians.  It is not an easy thing to break.

Our fleet burned back home to look for more interesting things to engage.  A few weeks ago Diz asked them, "Why four guardians?" after they had 4 Guardians for 3 DPS ships against our 4 DPS ships. They said, "Just say good fight."  I guess that is their idea of a good fight.

Thankfully, we were invited to go play with 7-2 and run around null in armor cruisers.  That sounded good and we docked up and jump cloned over to the area. I've made a nice little secondary base down there.  What I have discovered is that it needs more modules.  I'll work on that at some point.  We got together, got ships together and settled out to run off into null sec.

Flying with 7-2 is familiar and different at the same time.  The larger group sizes and more focus on doctrine leads to a different feel.  They still have a flexibility that makes me comfortable and I'm relaxing a little bit more and pulling new experiences out of my interactions with them.  For ops with 7-2 I have set up a blank jump clone because we go into null.  Null means bubbles, interceptors, and the increased chance of being podded. 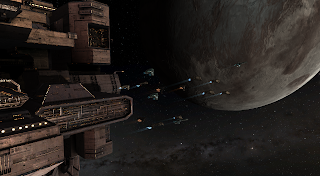 This is a point where I don't know where we are going.  It makes me thankful for autopilot.  Null is a series of numbers and letters strewn about to make it that much harder to hear commands.  Mixed with the unfamiliar nature of many of the systems and I find myself being rather cautious about where we are going.  We were in armor cruisers with logistics and then a fan of scouts seeing what was to be seen in the area.

One of the first gangs we came upon we only caught a few of their ships as the rest left.  Then we chased them around and grabbed stragglers for a few systems before they fully escaped us.  Armor cruisers have positives but their slowness is an endless frustration for me.  At some point I popped a Slasher.  I just remember thinking "must kill interceptors and frigates!"  There was discussions about their systems, jump bridges and such things that are abnormal fleet chat for me but very, very interesting.  New things to think about.

We wound up breaking off from chasing them because we heard of another group coming through.  That turned into a chase, find them, jump, cross jump, go reapproch, fight!  Shit started to go down.  They had a mixture of assault frigates, cruisers, battlecruisers and other stuff.   We took down their logistics pretty early in the game.  They decided that they wanted to leave after that point.  Thankfully, points were spread and several people had to stay for the show.

Three minutes is a long time for so much to happen.  Targets were everywhere and near the end my guns decided to stop working.  Nothing.  They went dead.  Once the fight was over a session changed fixed the problem.  I've had that happen in my Noctis before but never in combat.  Ick.

Right after that happened, one of our fanned out scouts caught wind of a 30+ gang by TEST out roaming.  We had 20 people which made it a perfect fight.  The fleet was grabbed and dragged off and we go cutting through systems trying to catch up to their probable pathway.  We finally found them and jumped as they warped to us.  We reapproched the gate, they landed and all hell broke loose as they put up bubbles and ships started to burn. 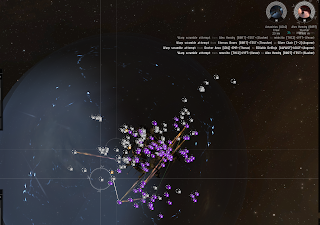 Free fire on the interceptors.  This made complete sense to me and is what I was doing anyway. I was a bit far away from the main points but rather close to interceptors.  So I webbed them and shot at them and ships are exploding everywhere.  Faster than I can cycle around the targets.  Pods are trapped and podding people was so so tempting but the ships are more important at that point so I focused.  The drones were all assisted to one of our interceptors and he buzzed around taking down frigates.

Then their bubbles went down and they started to bail. I was a bit surprised.  There were still lots of people on the field.  Why were they leaving?  Only it had not gone all that well for them and it made sense for them to leave.  Yet, time had frozen and everything was so frantic and fast. I looked back at the battle report and saw that we killed 20 ships and a pod out of their 35.  Oh.  Three minutes.  So much destruction.  I remembered to flipped my overview to be sorted alphabetically so that it was easier to find the primaries in that mess.

We reformed, regrouped, and decided to get the hell out of dodge before they brought numbers down to smack us for smacking them.  Then the boys got wind of a POS bash going down that they wanted to interrupt   I was tired.  So, very tired. I had to bail.  I wanted more.  But grogginess leads to stupid mistakes and dumber decisions.  Fried and LR had to leave too.  The bad part about being an adult that plays videogames is that the adult part does not go away.
January 07, 2013