When I wrote and published the Q&A for Eve Vegas that had CCP Soundwave saying that people would be able to place bounties on anyone and force them to suffer social consequences without restriction a lot of people were quite angry and horrified.  I had this period of time where I was wondering if I had misheard or misinterpreted things.

Enter, Retribution and I get to watch it happen. 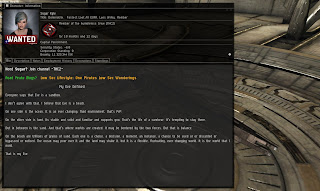 When the Bounty system first came to light those of us who have had bounties shrugged our shoulders.  The only benefit was that instead of needing to lose a pod the ship loss would pay out some.  Hopefully, those who spent their time angry with us would do something about it and the ISK incentive would bring us more fights.

This freighter kill has been big news but have people read the comments?  This conversation on Eve Kill.  Troll discussion or not troll discussion it highlights a very common opinion that was prevalent before Retribution came out.

I'll paraphrase the discussion because it is a bit long.  I tried to cut it into the blog but it was just a spamy mess.  I did paste bin it.  Beyond the fact that someone is accusing Kelduum of violating the NDA for the CSM as part of his gloating against gankers the person feels that Retribution will bring an end to gankers and goonswarm will suffer and etc, etc etc *yawn*.  Almost as amusing as the guy who thinks that bounties will cause people to gank their own alliances supers.

These types comments, positions and posturing is part of why the new bounty system is making sit back and snicker into my tea.  CCP Soundwave said that he wanted to perpetuate the Cycle of Dickery and to bring on Social Consequences.  I think that people assumed the social consequences would be for everyone else.

Many of the players that stay in high security space have been very comfortable there.  More so then they realized.  While the cries of griefers and gankers are loud and proud and people are forever sticking their noses into low sec demanding that it be safer for non PvP players and the pirates evicted to null sec, they didn't seem to realize how comfortable they were.  The ones that understand risk, even in high security space are not the ones who are crying now.

Until they became uncomfortable   Retribution allows anyone to have a bounty placed on them.  Instead of it being a thing where only people with a low security status (obtained by shooting other players) could have a bounty now anyone can for any reason.


Bounties have always been placed for fun.  It was just more amusing when it was to the 'deserved' people.  Now, anyone can have them for any reason up to none.  And that was the key.  No more restrictions.  Being a dick to be a dick has always been a valid tactic.  The new bounties send out a notice that tells you who placed the bounty.  If someone doesn't like it, do something about it.

No more having people identified as bad because they were PvPrs.  What about the market fights in trade hubs, the people that bring corp members into their corp to kill them, the can flippers, ore thieves, and general corporate backstab that is a backbone of the game?

Good and Bad are not so simply defined in a game as complex as Eve.  Many people assign it at a very basic level.  Those who hunt other players are bad.  Not hunting people makes you not bad.  Those are the only openly punishable good and bad actions in the game.  Someone can be a loud mouth forum troll and there was no real incentive to kill them other then personal satisfaction   However, even a gank can be turned around and the ganker trolled due to the fact that people are obsessed over ISK comparisons in kills.

It isn't about good and bad its about choice.  Its about fighting a battle on many different playing fields.  Its a lack of restrictions. I don't consider my corporation to be bad.  I don't consider my boys to be evil for destroying spaceships.  My opinion in this is as valid as any others.  We each define the world through our own eyes but restrictions force us to define it through someone else's view point.

And for those without ganking skills they were left to sit and wait.  Putting a bounty on someone before Retribution was stupid.  It was giving them money.  I've cashed in almost 100mil ISK in bounties on myself.  I also never though that anyone took the bounties seriously.  I thought it was cute that new players would ask me, "What did you do?" in shock over my bounty before.  I'd tell them that it was a joke, because it was.

But now, while not as impressive as may have been hoped, bounties have become quite fun.  For one thing: Bounties are scaring people.  Although all of the Dev blogs and patch notes clearly state taht there are no changes to the aggression mechanics of high sec due to having a bounty people are still upset that they have had them placed on their heads.  A lot of people seem to believe that a bounty will turn someone into a free to shoot target.  There have been spectacular results to these situations and high sec having massive free for all attacks where no one knows who to shoot.


The forums have everything from people giving out bounties to bad posters to smug, smug gloating to those explaining the system to the confused.

For the next: We are now getting money in kills.  Because everyone has a bounty PvP has started to mean a small shower of pocket change.  Its giggle worthy.  Random fights now come with cash.  Corpmates are putting bounties on corpmates and alliances.  During the normal course of PvP people are shedding their bounties.  It is a very interesting ISK transfer.

The profitable ganking may actually work.

If a Mackinaw (the new best mining barge per the latest dev blog) costs 160 million ISK the bounty payout will max out at 20% of the hull cost + destroyed modules.  Based on the hull cost alone a Mackinaw can drop a bounty of 32 million isk.  If this ship is killable by two gank destroyers they will walk away with a net profit.  Maybe not a large net profit but enough to replace what they lost and have something left over.

This won't be everything or everyone.  Most people have a few hundred thousand ISK on their heads.  But making someone worth someone elses time is now possibility.    Before one had to do contracts and such.  Now, it is a bit more automated and a lot neater.

And then there are funny advertisers in local:

Or as someone else said, "Making alts is hard."

Eventually people will tire of their new toy and it will not be quite as much fun and nonstop action. But the ripples of change are forming some intricate patterns and I'm enjoying watching the show.