Fun is an elusive term that is as flexible and ridged as the situation commands.  It is a very personal word.  One seeped in self definition and understanding and often one not able to be explained in true depth to others.  What is fun for me may not be fun for you but both are still defined, properly, as fun.  It doesn't have to make sense or be nice.  It can't be defined for one by another unless they already have a mutual agreement of it.  This is truly so in Eve, where the why of 'fun' becomes a twisted and convoluted thing based upon personal and social reasons.

There are some new players in my corporations public chatroom.  They were brought into the chat, at my request, when Deno returned to the game due to some friends starting to play.  Deno introduced me to THC2.  Because I enjoy helping new players and am a firm believer in Eve being better with some type of social group to learn upon, I asked him to dump them into the chatroom so that they would not become dependent on his login times.  This gives them a larger pool of people to answer questions, receive help from, and socialize with.  If I would ever push any social responsibility agenda in Eve, it would be to help new players in these ways.

Of all the many things talked about in Eve, the start for a new player is a topic that never gets old.  Each person brings their own opinion to the table.  As they grow and change in the game so do their ideas and opinions.  It creates a wide pool of possibilities for a new player that is ever shifting as people develop their own, successful paths into the game.

While Eve is a sandbox and a player can reject the tutorials and content handed to them by the game, many new players, as they learn the basics of the game follow a simple path.  Do the Tutorial Missions (there are 50 of them, but they don't take long) and then...

At this point, if still lost, they are shooed onto to try the Sister's of Eve Epic Arc.  The Arc is mentioned in several places.  However, for reason I do not understand many new players miss these references   It is a bit obscure.  It may have changed, but if it has not, when the 5th chain is finished the next popup should tell the player to head towards to Sister Alitura in Arnon to start the Blood Stained Stars (aka the Sister's of Eve Epic Arc).

The Epic Arc is a series of Level 0 and Level 1 missions that will drag a new player around and introduce them to many new situations.  Often they will be rewarded for doing nothing more then going to an agent and talking to them.  The total payout is about 10 million ISK.  It is accessible to a 2 day old player.  I highly recommend it for many reasons.

I recommended this. I thought it was a good idea. I still do.  However, Hono disagreed with me and said that it was poor money and not worth the time to do.

Now, one reason I push people towards the arc is that it immerses them in game play a little bit more.  Newbies are not bitter.  Basic bitterness comes very quickly with PvE.  The missions are repetitive and many of them are very silly.  The Sister's of Eve Epic Arc has more of the feel of a 'quest' line that people are used to.  While Eve may be a sandbox and we have missions and not quests and everything else, people often times still need to be weaned into the life of Eve.

My response to Hono was, "Don't persuade new people away from perfectly reasonable content because you have moved past it."

Hono's response was, "Then get a bit used to the market, and spend 30 minutes of your day hauling stuff. You will get close to 80mil in the first 2 weeks. Then do whatever you want."  He then added that he should do the career missions and sell everything he got.  "I mean ALL the career missions from the 3 starting zones (if you did that, then you should be set)."

Which I argued, "You think that is more interesting to senselessly grind 12 chains of starter missions and then start hauling stuff then going and doing the SOE and exploring the game a bit?"

And Hono said, "More interesting than covering over 70 systems (adding his 30 systems to get there) doing L1[level one] missions. But again, I'm giving my opinion, I accept people think differently about it"

My first reaction was along the line of, I can't believe you would advise a new player of this.  I felt all huffy.  But, he had a point as well.  I had done terribly in the combat missions from the newbie tutorials and everything else I tried that was combat oriented. I didn't want to do anything that had to do with missions and ran off to mining as soon as I could.  Even if it is shaped like a penis, my Iteron was one of my most valued ships.  I still own all of my original Iteron from the tutorial missions.  If I had had any trade sense at all I would have tried doing some basic buy low sell high hauling.

Also, everyone is not me.  I forgot that many people are caught up in the best and fastest.  Min/max is something that I have never understood and it has never invaded my game play   Yet, instead of dismissing Hono I have to see the validity in his discussion.  That path would interest some people more then others.  It is also not a dismissive path and will create resources and skills that someone who may be more focused on trade and logistics would appreciate.  Plus they get standings, something I am well known to ignore and not care about despite its value because obtaining them is to closely attached to my hated missions.

Helping new players is fun but being open minded can be unexpectedly hard at times.  Even in Eve.

We did warn him about Jita however.  The den of iniquity that it is.  I got a lovely shot of the busy nature of the undock. 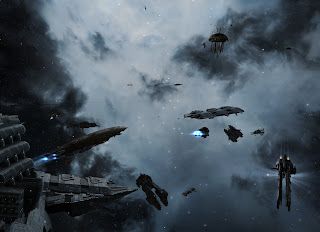