To Insure or Not to Insure

Eve has some of the stupidest and most incompetent insurance companies ever convinced.  These people recklessly hand out insurance policies to Eve pilots and corporations who then run off and have the ships blown up hours after they receive coverage. Then the same people come back and do it again, only to receive another freshly minted policy that they immediately lose.

Insurance is an ISK injector into Eve.  That makes it a hot topic.  What happens is you pick your insurance rate for your ship and pay a fee.  The insurance payout on the destruction of your ship is higher then the fee you paid. Considering that you have already transferred money for the cost of the ship the ISK from the insurance minus the cost of the policy is magical ISK injected into the system.

What amuses me endlessly, is that there is also a basic insurance pay out for any ship lost.  If you do not insure your ship you still receive a payout.  It may be terrible but you will receive it anyway.  Here is a base payout of losing an uninsured Hurricane. 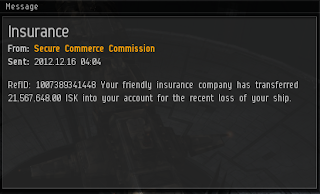 Here is what I could have received if I had insured that ship. 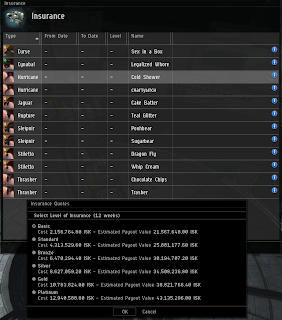 The hull cost of the hurricane is about 43mil ISK at the moment on the market.  However, insurance is calculated off of the mineral price of the hull.  That is what catches people.  We all start off flying and insuring T1 (tech 1) ships that are made 100% out of minerals refined from ore found in asteroid belts.  The tutorial teaches us how to insure our ship.  It then teaches us how to participate in insurance fraud by insuring our ship that we are sending on a suicide mission.   Later, as we get into specialties and shiny things we advance into T2 (Tech 2) ships.  However, T2 ships cost more then T1 ships but that is because of their specialiness and that specialness is not covered by insurance.  My Sleipnir's have all cost around 300mil. 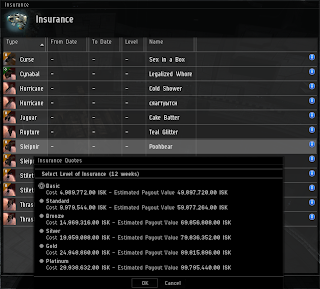 When I went to build my Sleipnir I discovered that only part of its cost was the hull of the cyclone that would be modified into the Sleipnir.  The rest of the stuff was various components and things built in factories on planets and ... somewhere... in space... that are expensive.  T2 insurance might look okay in paper but it does not fill the bleeding hole in the wallet that losing a T2 ship causes. 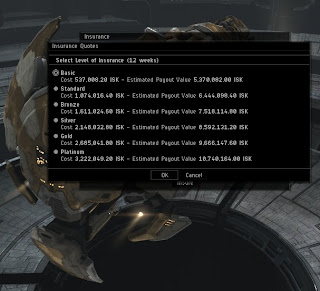 T3 (tech 3) ships get even more interesting.  T3 ships are made out of special wormhole magic.  This magic is not calculated at the same value as basic minerals are by the insurance companies.  Therefore, insuring a T3 ship gets you almost nothing.  There is no wormhole magic insurance.  It may also be because they are so often horrifically ugly. I'm not sure.  I can only blame my Legion's looks for this pathetic insurance payout possibility.

I'd not want to insure that if I was them.  Gah, it still makes me shudder just seeing it.

Insurance is an interesting subject.  Some people always insure and some never insure.  Some don't take the time to read the policy information and assume that they will be compensated for the cost of the stuff that they lost.  This brings around amusing rants such as this one from a lost Tengu:


"My "not watching the screen" cost me a cool 1bn isk.  If insurance was actually worth it i would have. Tengu platinum insurance costs 3.2mil and the payout is 10mi. The hull alone costs 200mil. Then the subsystems, another 400mil. Then the modules. 10mil payout are you shitting me?

Insurance needs an overhaul.  Snd should be based on risk, players who spend a lot of time in null sec or low sec have to pay more than high sec players who insure against falling asleep. Rant over."

I don't worry about it.  Insurance is a a bit of a game.  Will it lapse before you lose the ship or will it not?   The lifetimes of my ships has become a bit short of late.  T1 ships are worth insuring.  I really need to get into the habit of doing it more often or at least before I head out on a roam.

Another thing is that someone can insure a ship and then give that ship to someone else.  So, a corporation can insure a T1 ship and then hand that ship out and the corporation gets the pay out while the pilot got a free ship.  Or, if you are like me, and tend to give people ships to get them to come out on something they are not prepared to do, when they lose said ship you collect the insurance payout from it.

In general I'm pretty neutral to insurance across the board.  I think that it is a good thing that the payouts become self limiting at some point.  When one steps up into more shiny and more expensive things some negatives come with them.  Not liking negatives doesn't mean that they are bad.  In fact, it often means that they are working as intended.

The thing about insurance is that, unless it lapses, you always get back more then what you put into it.  Even for a paltry payout you'd still be that much ahead.  Yet many people (including myself) don't insure anything.  I was trying to remember why I don't insure my ships and after musing over it for a while I remembered someone saying that insuring ships was stupid and that they never insured them.  This happened to someone I used to respect when I was very young.  The opinion hung around with me and I stopped insuring my ships because of it.  I didn't want to be told I was stupid for insuring them even though I was pretty sure that it wasn't stupid.  However, I assumed I was missing something.

Nope.  I'm not.  The bad part is that I got out of the habit.  Sometimes I remember, often I don't.  For my T1 ships I really need to get back into the habit.  I am on a current crusade to excise unneeded opinions that are holding me back so this is one I forgot about along the tree that I am trimming into shape.