I was in a lame shield loki boosted fleet today.  At least, that was how it was described by the triple guardian armor tanked station hugging fleet that we were fighting with.

But they came later.  I had bounced up to MH to fit out my stack of cynabals.  Vov found a corp bashing a poco in the next system. They had a hurricane, prophecy, 3 bombers, 2 of the new destroyers, a thrasher and something else or another.  'Detta wandered over as well and we transformed into the tempest fleet issue(TFI)/talos/hurricane group.

We jumped into system and warped to the poco to land at range.  As we landed, everyone warped off.  All of them.  Just gone.  Okay.  Well.. hmm..  we hung around for about ten minutes.  They were set up in a POS.  Okay, we went back to the next system and docked while the scout watched. 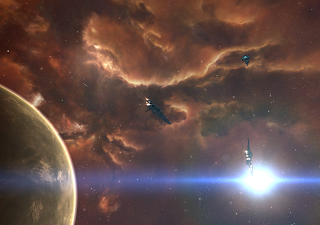 After their suspect timers wound down they came back to the POS.  This time, we undocked, jumped in, and warped to zero.  We managed to nail the prophecy before it warped off.  Everyone else ran way.  The prophecy was quickly dispatched as it shot at the TFI.  We waited again but they did not come back out.  Instead, we wondered why the prophecy had a cloak.  So we left.  Again. 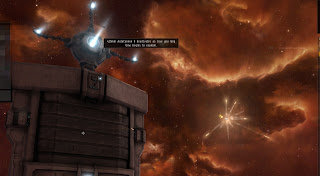 (So far I am finding the new ship explosions underwhelming.)

And sat on the gate.  And once the suspect timer wound down again they went back to the Poco.  And we jumped in again, warped to zero and had a hurricane slam into the TFI.  It was pointed before it could warp away and we killed it as well.  This time we didn't hang around but we left.

With their two bigger DPS ships dead 'detta and I decided to down ship into frigates with the hope that maybe we could tackle something.  I had a rifter and 'Detta a wolf.  Vov stayed in his TFI.  'Detta and I hopped into the system and attempted to form a tactical distance and land on the stealth bombers.  We had this glorious plan based off of our intel but they warped off grid as soon as we entered system.

I wandered afk for a bit while 'Detta tried to chase them around in his wolf.  Eventually I came back and there was not another corporation, in a fleet on the high sec to low sec gate.  Vov wanted to go poke at them.  'Detta and I followed.

Lain (from pirates vs carebears) was hanging around in chat and after I posted the kills asked if he could join.  In short order he shipped into a frigate and found out where I was hanging in Molden Heath low sec.  Kittens had also wandered into system and wanted to join.  I asked Vov if they could come.  He was like, "Sure, whatever" which for him means "Yes they are welcome, please let them know not to be stupid."

By the time we reached the gate they had warped to a station after fighting something.  We followed to the station.  This is where I typed in, "I hate station games," because I do.  I just want to leave whenever they come up.  Last night was station games as well when I was out with the boys.  Vov goes, "I know you hate station games."  We played them anyway.  I tried not to be grumpy.

They undocked some hurricanes to feel us out.  Station games seem to be a lot about both sides trying to get the other side to do something wrong.  Vov was reminded that Kittens and I are fair game due to the outlaw sec status.  The dock and undock game was played while they attempted to position ships.  They did some attempts to lure people into their trap.

Eventually a Tempest warped on grid and we were far enough off that we decided to shoot that.  Like an idiot I got into neut range of it.  However, Lain came and tackled him and I cheerfully motored out of range.  That was when the rest of their fleet undocked.  I was rather separated from everyone else due to leaving the area of the heavy neuting Tempest.  As everyone else undocked and targeted me I warped off.

My cap was dead, dead. I safed up for a moment for it to regen.  As I headed back I heard  "They are getting reps.  Burn away.  You're fine.  We're fine.  Just burn away," said Vov.  Followed by, "Well maybe you're not fine Kittens," as Kittens new Corax exploded due to a Vagabond Vov was chewing away at.  "Everyone else is okay," he added as Lain disconnected and died in a tiny frigate fire.

I warped to Vov.  'Detta regrouped. I land on grid and they have half a dozen ships out and three guardians. The vagabond that had killed kittens had wandered out of range of the guardians and Vov capped and blapped it (while 'Detta stole the final blow somehow but we don't discuss that in public).  We stared at their fleet, hovered under the undock, with their guardians cap chain illuminating them and decided to leave.

The scout, in system, caught the "We chased off their lame shield loki boosted fleet."  I guess if we had been an armor fleet with legion links and 3 guardians we'd not be lame?  I don't understand smack talk.  Especially smack talk like that.  I know its meant to upset people and make them make mistakes but.. bleh.  Whatever.

It was a good day.