It just so happens that I've never flown around in a shuttle before I wrote this post.

I'm not perfect.  Today I shall confess sins.

I often times autopilot empty pods for neutral alt characters that I am sending across the galaxy to do various things that I need.

Today, while doing so, it was suggested that I get into a shuttle because the route I was taking was camped with -10 pod poppers.  These are people that wait for autopiloting pods and pew them for fun and tears.  Even if you don't cry, it can be a great inconvince.

Normally I just dock for a noobship.  However, he told me to go and get a shuttle.  I groaned, looked on the market and debated shuttles.  Unlike almost everything else, shuttles do not require a racial skill to fly.  Therefore I picked by the only sensible method.  Which one was the most attractive. 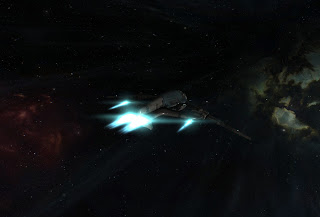 It was empty.  I cheerfully puttered from one part of the universe to the next consolidating my industrial assets and contracting them for a move to a new home system.  It was fun in this useless scrap of fast metal.

Detta is like, "You forgot to add that shuttles have a 500ms sub warp speed a 6au warp speed and a 1.5 second align time."

All that means its very fast for getting to from point A to point B.   Speed won't always save you.  A instalocking thrasher locks in under a second and a smart bomb sucks no matter what.  Shuttles have a lot of value but there are plenty of shuttle kill mails with large ISK amounts in them.  Don't be silly, just have fun with the go-kart.
December 15, 2012