Saving a Little on a Lot

I pried my cold, clenched, miserly hands off of some of my ISK today.

Back when I started on the whole Gallente Cruiser V to get a Cynabal thing I promised myself that I would get some low-grade snake implants to go along with it. Somewhat freed by Ender's discussion with me the other week about how it is okay for me to have and fly more expensive things I decided to use the excuse of my 'birthday' to convince myself that it was okay to spend this ISK. Maybe one day I'll not consider an 700-900 million ISK of implants a lot. But for now I do and the deciding to buy is painful.

Spending ISK is always the hard part for me. Once I spend it I write it off as lost. It is one reason I don't actually like to calculate physical assets in game. Everything is expendable.

Financial planning and thinking is a thing in Eve. Unlike many games were eventually you acquire more game currency then you will ever need Money is a driving force. We lose things after we buy them. Nearly everything can be considered a consumable. Loss is permanent. Even the rare items in game go boom sometimes. Some people are ridiculously, filthy rich but they are an incredibly small minority. We just can't ignore finances in the game. We are million and billionaire immortal spaceship pilots and sometimes we have the financial sense of gerbils. Due to the high cost of being immortal and flying spaceships the gerbil finical abilities are more a hindrance then adorable. 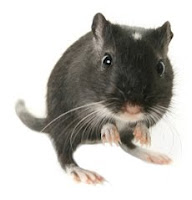 I wanted to whine but really, no one wants to listen to me bemoan being poor and suffering the plight of paying for expensive things. I normally get told, "You have ISK buy it." No one seems to feel sorry for me. Someone once told me that girls are coddled and given free things in video games. Where is my coddling? My boys are like "Sug, go spend some of your ISK for once."

I decided that I'd look for a combo set on contracts. It is an easy way to find things at below individual item market prices. People don't have to lug things to trade hubs. Contracts can also be seen across the entire game. My first search landed me a stack of contracts that made me tilt my head to the side and raise an eyebrow with hopeful interest. 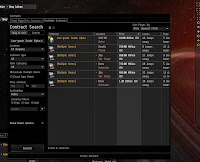 One of these things is not like the others.

Upon actually looking at the contract it was missing one of the implants that completed the set. Well damn. I was so hoping for a magical deal. 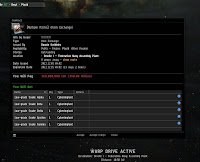 I did a quick search on that implant and saw that it was more than the combined cost of the others.

But the question was, was the contract worth it for the other ones? To the Jita Alt! I took a few minutes to research the prices. I wanted this now so what prices had been and what they will be did not matter overly much.

My search answered my question quickly. This implant set was a good deal at the moment.

From looking at Rens and Hek Jita was the lowest price. I glanced at Amarr on Eve-Central and didn't waste my time logging in that alt.

The contract itself was a good deal even though I would have to get the most expensive implant on my own.

The contract equaled a savings of 77.7 million from Jita.

By itself, the Low-grade snake Omega that I was missing cost 365 million in Jita.

The next cheapest contract that had all of the implants together was for 899 million ISK.

Buying the smaller contract at 350 million ISK and tacking on the missing implant from Jita at 365 million ISK cost me a total of 715 million ISK. My savings buying the contract missing one piece and adding the piece compared to the already put together contract was 184 million ISK.

Yay for saving money! The most irritating part was that I had to go to the region where the contract was for the implants. Contracts are very nice. They can be made from anywhere in the game. However, they can only be accepted regionally. When I first looked at the contract I checked my maps and routes to make sure I was not buying something in a high sec island somewhere. That is a common theme with prices that are a bit to good to be true.

Onward the noob ship! In fifteen minutes I was in the region with the contract and the contract accepted. During that time I ran my numbers through the other trade hubs and checked them against themselves. I might not be getting the deal of a century but I was pleased to save a little bit.

I used the savings to write courier contracts and have everything shipped through Red Frog Freight. Damned if I was going to drop them in a fast frigate and hope for the best. Add in shipping to where I wanted it to go. 13 million for the low grade snake omega. 9.5 million to ship the rest of the set. 500 million isk set as collateral on each one.

Normally I would haul my own items. I have written quite often about my hauling of stupid amounts in shiny mods. Today, my main hauling pilot is on vacation and she is under Dec Shield. People hunting war targets like to hang out at trade hubs and in major pipes. Moving any of my war deced characters through high sec with a load of shiny things would be stupid.

I do have a non-corp alt that can do the cloaky hauler thing. However, why? Twenty some odd million is well worth the trouble of having someone else haul it and drop it off at the station of my choice. There was a time, not so long ago that giving up that twenty million for something I could have done myself would have been worth the time spent. Now, I'm happy to let someone else make the trip up to Jita and back for me.

I also could have put up buy orders and hoped. No thank you. I already am fighting being undercut by .01 isk warriors in other markets.

I will have to get them into Sugar's head still but I've improved my odds of losing them to her being podded and not a transportation derp on my part. That's an acceptable risk.