Released Into the Wild

"I just never would have seen you as someone that likes mining."

Perhaps because the PvP all the time voices are so loud, it is easy for some to forget that people who PvP and may be classified as something of a pirate might have other interests.  Someone called my blog PvP focused.  I rubbed my chin and pondered that for a bit.  I don't see it as PvP focused.  I don't actually see it as focused if I'll be frank.

Anyway, my Orca.  I popped it out of the oven the other week and went to fit it.  I immediately learned that my fitting skills were lacking in some areas. I'm sure that it is bad that I fit to the fit I want the ship to be in.  However, I don't want to spend months working on support skills I don't need for a character that flies three ships.  I plugged in various skills and let them cook.  My industry alt is not much of a pilot and has many holes that are easy enough to fill in her ship fitting skills. 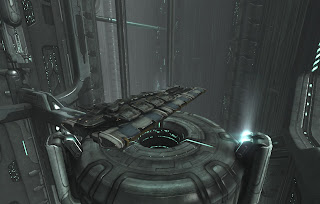 I decided to start using my Orca as it is designed to be used.  As a mobile, industrial platform.  I have two bases.  One I just mine things at, but the other I do my building.  I realized at some point that I could just move my own things in my Orca.  The base value of the minerals would be a few hundred million and well outside the gank range for taking out a well fit Orca.  I could also transport my Mackinaw inside of it and only move one thing around whenever I needed to switch bases.  Then, I realized that I could also set up my Orca to do things like hold spare crystals and a flight or two of drones and hold useful unimportant things.

A trip to Rens and a long talk with Ren about fits, tank, propulsion(prop) mods and rigs led to my somewhat hybrid tanking travel Orca.  I don't plan to carry anything that is worth it to other people to gank me but I also don't want to be overly gankable.  I know that every ship can be killed. Heaven knows that is a clear and understood thing to me.  That doesn't mean that a ship should not be fit well.

What was pushing me was the fact that I didn't want to turn into my first CEO.  Discussing Orca kills, I pulled up this kill mail.  I was no longer in the corporation at the time it happened.  Even at the time, I could see that it was a terrible fit.  I don't often comment on fits because they are not my strength.  That situation was a can flip, a lot of not having a clue what to do, and a very sad explosion.  That corp shortly thereafter wardeced them and the CEO left the game, sent one or two eve-mails through eve-gate and vanished.

I went and spent money on it.  It is one of those times when one remembers that the hull is only one part of the cost of a ship.  Large rigs are a bit more expensive then I am used to.  Still, you buy what you need to buy to fit the ship properly.  That was a very hard lesson for me to learn.  I would have done a lot better earlier on if I had rigged my ships and purchased the meta level modules that I could afford at the time.

Although I have desired an Orca from my first week, I am glad that I waited.

One more little goal, checked off and I'm absolutely thrilled about it.