I made it two minutes in game before I got a bounty.  Heh.  I was told a Pirate Queen needs one.  :)


To my puzzlement there was a contract waiting for me when I logged in.  I accepted it and saw that ren, amazing man that he is, had run out and purchased the new ECCM Skill books and created contracts.  I injected all of them and happily started learning the first one which will help me resist ECM (aka Jams)

Ladar Sensors are primarily found on Minmatar and Angel ships.


I shoved that in front of Destroyer V.


I next I did was set all of the wars that Capital Punishment. is in to retracted and get us out from under the Dec Shield spam.  Dec Shield has been utterly annoying due to the constant notifications. I have over a hundred of them.   As for the war part of it, I can only shrug due to the fact that I do not care.

Then I undocked and eyeballed my new safety button.  I will be happy when they build in the save feature for it and I don't have to think about turning it off every time I undock. 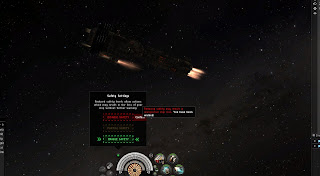 I have listened to the stories of high sec burning as people figure out the new aggression mechanics while others fail and die because they forgot about them.  I went on a hunt for Dragoon BPOs.  I figured that it would be a perfect replacement for my current salvage Thrasher.  All of my accounts will know Amarr Destroyer V so I can just fit out one type of salvage ship plus have some drones for defense.

There is almost to much information on the weapons up up notifications now.  It will give me stuff to read during warp I guess.  I then tried to do some ratting to drag my sec status back up.  That turned out to be weird as well because I forgot about the new targeting stuff.  Everything is much more scary looking now.  Lots of red all over the camera.  I also like the new notifications. 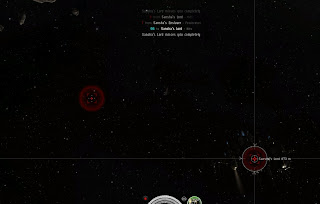 I then sent my alt trundling around until I found some Dragoon BPOs.  I decided that this will become my new salvage destroyer.  Due to the skills I have learned I will be able to fly it on my three characters that all salvage.  This lets me make a lot of the same thing and trade them around easier.

So far there has been no Dev response about our requests and pleas over the 1/10 and 2/10 DED complex changes.  CSM members have sounded in and said that they will bring it up.  I am saddened that we have been ignored so far about this.  I'm trying to think of it in a non negative way.  With the patch out everyone has been very busy.  Sure, they have answered other things for other people and continued to ignore us but maybe someone will notice soon.  Maybe.  I hope. Its rather depressing and feels a bit cold not have have heard something yet.

I am also astounded by how many people have not read the patch notes or Dev blogs.  The forums have dozens of threads from confused people that do not understand what the changes mean.  Chat rooms are carefully and slowly repeating everything over and over to people about bounties. The biggest issue sit hat people think that if they place a bounty on someone they can kill them as much as they want because bounty.  There are a lot of people exploding in a cloud of confusion.

My lack of business sense has not caused me to pounce upon opportunity   Instead, I am buzzing around quite happily collecting the things that I want to buy and have.  Razor is off making Ventures for eager people who want to throw their cash at a frigate that costs less then 500k to build.  I'm buying BPOs for the new ships to research.  Some I will sell later and some I will have prepared for people I know that want them.  People have purchased all of the NPC BPOs and are listing them for very high prices to cash in on the newness of it all.

I'm not yet brave enough to get into one of my Hurricane's and see my fit nerf.  I'll leave that for tomorrow.

I'll just go and fit my Orca out now that I can finally fly it.  That will make everything better.  I am thinking of naming it "The First Sin" or something along that because:

Pride
"In almost every list, pride (Latin, superbia), or hubris (Greek), is considered the original and most serious of the seven deadly sins, and the source of the others. It is identified as a desire to be more important or attractive than others, failing to acknowledge the good work of others, and excessive love of self (especially holding self out of proper position toward God). Dante's definition was "love of self perverted to hatred and contempt for one's neighbour." In Jacob Bidermann's medieval miracle play, Cenodoxus, pride is the deadliest of all the sins and leads directly to the damnation of the titulary famed Parisian doctor. In perhaps the best-known example, the story of Lucifer, pride (his desire to compete with God) was what caused his fall from Heaven, and his resultant transformation into Satan. In Dante's Divine Comedy, the penitents were forced to walk with stone slabs bearing down on their backs to induce feelings of humility."