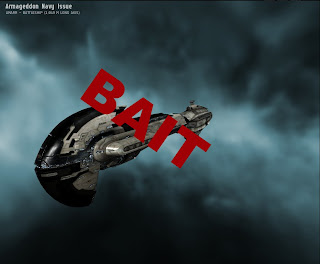 The obvious bait was an Armageddon Navy Issue hanging out on one of the gates to our home system.

At the time there was Razor, Ren and I on.  Razor and Ren had just lost their ships to another fleet that was still hanging around two systems over.  Now, this sudden faction battleship is just hanging around asking for a fight.

There are a lot of unspoken signals given.  Hanging around an occupied system, out in space is an invitation to the locals to undock and come play.  However, body language, or perhaps, space language is like normal body language   It gives away more then it means to if you know how to read it.

Solo battleships in low sec are not normal.  I had to explain on the forums to one newer player that gate camps are not composed of Machariel's and carriers and that the ships one bumps into are most often battlecruiser hulls and down.  There are plenty of people who pull off solo battleships.  You tend to know who they are.  A Navy Geddon hanging out alone like it's looking for something?  That smells of bait.

Baiting is an art form.  It is a way to lure people out into a fight or keep people on the field.  Bait does not always have to result in a gank of overwhelming forces. Sometimes, bait is used to start a fight with those that would prefer a gank over a fight.  Sometimes a new member can be sent in as bait but more often the bait pilot needs to be experienced.  They need to know their ships capabilities so that they can time the information with the fleet once they are engaged in a fight.

Baiting in itself is not a bad thing.  It is simply one of the many things that happens during the course of non-consensual spaceship violence.  For some people, the single minded focus on a ship makes them not take a few steps to look and pay attention.   One can look and see that the surrounding systems are clear.  But then are the next systems clear?  Do they care?  Is the thought of a shiny kill mail causing their common sense to wither away?

Surveying the bait starts here.  The difference between bait drake and battleship drake is often EHP.  A properly fit bait battleship will probably have so many hit points to grind through that the fleet can leap two systems before he goes down, warp in, drop reps on him, flood space with falcons and wipe up the aggressing fleet.  Especially if said aggressing fleet is taking gateguns.

Bait is not bad to take if you want to take it.  Many a fight can be flipped with proper bait and counter bait tactics.  Its a good way to get a fight out of a gank.  If people are sure you took the bait then their comfort of their trap may put them in a situation where the reversal is shocking.

This time, it was a bad way.  While the boys debated the Geddon I ran the pilot through Eve Kill to come to a lovely little bit of information.  He flies with the fleet they had just tangled with that was hovering two systems over.  Although his corporation information was not shared his killboard information was shared.

Meta game, out of game, intel, whatever you want to call it.  The tools were there and I used it.  If we had engaged it would have been something like Battleship/Battleship/Battlecruiser and that would have given them plenty of time to run in and spring the trap with their Battleship x4 + two cloaky things one probably falcon.

The bait was not taken.  Razor's comment was a note to them to stop wasting their time hoping we would be tempted.  It was amusing that he even docked in our station. Our station is a good station to live in but not one that people are going to randomly come and visit out of all the other selections that have things to do at them.  Docking in a station and undocking is another little bit of 'come get this' body language.

There are fights, there are outnumbered fights, there are wild possibilities, and there are stupid welps.  I like avoiding the stupid choice.  I may not be aggressive enough.  My first thought isn't 'oh good kill' its 'why is that ship alone?'.  Sometimes it really is just someone making a terrible decision but too often the story is a bit more complex.