While flipping through my salvage I noticed this particular little bit of market scamming in Rens and decided to write about it for those who have not actually seen these at work.  Rens is one of the five major high sec trade hubs.  Jita, most often heard and referenced is the main trade hub in the game.  However, each empire has its own hub and Minmatar space manages to have two.  Rens is a more solid hub then Hek.  Hek, due to its proximity to low sec manages to focus more in ships, fits and ammo while Rens tends to be an everything type of hub (or so I have found).

So, Eve.  Eve is a terrible place full of terrible people that do terrible things to each other during their free time so that they can vent their psychopathic and sociopathic tendencies online instead of in real life where they would be evicted from their mother's basement and cast into a world where there is no chance that they will ever feel the touch of a woman much less be able to interact with another human being due to their complete lack of social skills and the fact that they would be beaten to a pulp by a 'real' person since they are obviously helpless nerds on a power trip.

However, Eve players are creative and allowed to be.  In many games, the creative manipulations that players figure out are quickly staunched and loopholes closed so that no one might possibly lose their internet pixel money.  Eve uses these events as advertisement instead.

But the Market is a time bomb for the unwary.  The awareness of it takes time to develop.  It is a PvP environment as real as the worst part of space.  The payment is in ISK and the traps are creative and subtle   Some are not so subtle and simply prey upon the inexperienced   They are almost like market gatecamps.

I'm not a market pro but I can understand a few of the basics. 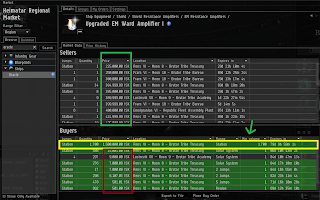 The market order I have highlighted in yellow is a trap.  It is too good to be true.  This random person will pay 1.5mil for this module!  That is amazingness higher than everyone else that I have outlined in red.  This must be a goldmine that no one else has caught onto.  They have idiot sell orders sitting there in the green square not enjoying the bounty just waiting to be had.

Please note the green arrow.  This is a field of the market that most people cannot see unless they have expanded their market window.  It is very, very important.  The min volume field means Minimum Volume.  This is how many the seller wants to fill the order that that price.  Note that the other ones are all 1 yet this one seller with the magical 1.5mil ISK for the module wants 1,700 of these modules.  That would be 1,700 of them all at once to fill this order.

But you can just buy them and turn a profit on each one! 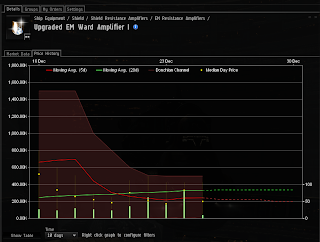 Take a moment to look at the price chart. It will help clue you in on what the module has been selling for recently.  It can really help with a sketchy price.  I picked the 10 day graph but there are several options and if you are into such things you can find out all sorts of interesting information.  Notice that they are not selling for 1.5 million at any type of average.

No.  Not really.  First of all, there are not 1,700 of them on the market easily accessible   Running all over kingdom come might net 1,700 of them.  The chances are high that the seller has plenty of them listed on the market for people to snap up to fill this order.  The thing is, a market order automatically will fill if a buy order is placed at or above the price of a sell order on the market.  If you see a discrepancy like this it isn't a holy mother lode moment.  It is a trap.

I cannot beat people with the clue bat enough.  You must always, always be alert in Eve.  Even with the market. It's not just about the spaceship explosions.  People can and will ruin you any way they can.

Not only is this seller probably selling their own items at an over bloated cost they may also have a margin scam going on.  This means that if you do manage to find 1,700 of this one type of module and attempt to fill the buy order, the buy order will fail because the person who placed it does not have enough ISK to cover the order.

Margin trading is very viable and useful for traders moving a lot of product and with many orders up and down.  It is also very useful for people creating scams like this for the unwary.  This trap is exactly that, a trap.  It is meant to catch those who do not understand the market.  People who do not know that even if every condition is met the trade can still fail.   I think this one is a trap for newer players because of the item used. 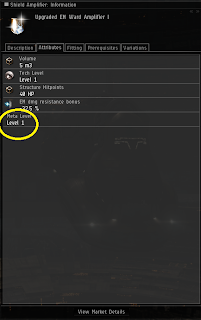 This item is a somewhat common meta 1 item.  It's not amazing. It isn't a meta 4 or even 3. That means it is going to drop as loot often enough to mission runners in high sec.  Enough that people will fall over this scam.  Not enough that everyone will have hangers full of them.

I'm not an expert in these things.  I just function off of the "Looks to good to be true" mentality.  Its a trap as much as any bait shaking its tail in lowsec.  I'm sure the market people can just pour out information forever on these things.  These are the types of tiny pit falls that are everywhere in Eve every day.  It's not just the evil pirate pewpew that one must watch for.

I was told to add some extras by a more market savvy type.

First, Heck is a sellers hub.


Second, If I had scrolled down and paid more attention I would have found a few buy orders selling that module in bulk form for above market price. This is an alt of the seller (or the buyer is an alt) hoping to make the ISK by selling their over priced items at below the buy orders cost. It looks like a fast flip for profit to the unwary.
December 27, 2012