I Am My Own Worst Enemy 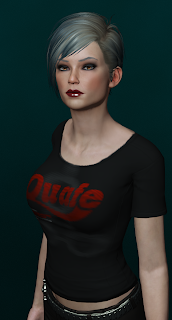 It is not the bad days or the explosions that irritate me.  It's the terrible, terrible decisions that make me sigh.

I have a problem of not thinking when someone tells me to do something.  I just do it.  Now, this problem does not extend to everyone. I promise, if you randomly just start giving my orders I won't follow them.  But, when anyone that I fleet with that has more experience than I do issues an order, I tend to blindly follow it up to and including my doom.  Their opinion is greater than my common sense.  Thusly, I have often struggled with content that I wasn't ready to deal with because people sometimes forget what it is like to be in the position of a lower skill point player.  Instead of questioning I just assume that I am terrible at things.

The worst part is I often know better.  I'll sit there and go back and forth internally about following instructions when I really, really feel that I shouldn't.  My default is still set to 'Sugar is clueless' so I tend to follow the direction against my (possible)better judgment.  This is not to be confused with me thinking that I know everything about everything.  But, when I have been given split tasks or an order that does not fit the situation I am not thinking for myself enough.

I'm not completely sure how to overcome it.  I PvP in fleets and I try to situationally fit the fleet.  If I am in an ordered fleet with a doctrine and some greater goal I try to be the best little fleet member I can be.  I don't want to be that person that everyone sighs over and debates if they even will tell them a fleet is going on because they derp constantly.  I picked up this habit when I first started.  Nervous and not having a clue about what was going on I tried so hard to listen and do everything perfectly so that no one would leave the newbie at home.

This may have caused me to develop bad habits.  While a lot of the PvP that we do is in small groups and requires independent thought, an order will instantly cause me to drop what I am doing and attempt to follow it.  Or, it will curtail me from doing something that I am really sure that I should do given the situation.  Sometimes I just really think that I should do X or Y and I find that I am struggling between knowing when I should do something and automatically assuming that I don't know what I am doing and not being creative or thinking outside of my box.  Then everything gets looked over and I sigh because I should have done something I was thinking of doing but I defaulted into doing as I was told.

There has to be a balance between independent decisions and being a lose cannon.

A lot of the question is where do I push.  Where do I push my envelope of self growth to expand it without becoming an over bearing idiot, a fleet liability, or just a massive pile of stupid fail decisions?  In my moments of non frustration I suspect its a normal aspect of growing or learning about things.  Most of the time I am just frustrated with myself and my second guessing myself into poor decisions.  Its why I don't solo.  Until I can break past my over thinking and have actions become a bit normal I'm doming myself to flailing about uselessly and tripping over my own feet.

My problem isn't making mistakes my problem is making stupid decisions that I know are stupid.  Things won't always go as one hopes they will go.  I'm fine with that.  I simply want to enter into the situation having made an informed decision.  I want to break what I feel is a command because it is the right thing to do.  At the moment, I have thoughts and ideas but they are still murky and unsure and I wind up doubting my view of things.  This is why I refuse to Fleet Command in any capacity.

There are moments when I envy people that can just dive into a situation and be that what it may.  The now works for them and they don't spend time worrying about what may be, what is, various possibilities and how to counter plan against all of that.  I'm a planner by personality.  It doesn't just go away when I'm in a game since its rather part of how I think in general.

Where I shine is when I don't think about it at all and just do.  I just don't experience that enough yet to make me happy.  Also, again, if someone that I feel has more knowledge then I do counters my decision making process I'll stop and assume that they are right because they know the game and I don't.  I am my own worst enemy in these respects.

But its holding me back.  Or maybe it's one of those moments when the fog has cleared enough that you can see where you are going and you realize that you still are not going to be there for a while.

Writing it out helps.  So I do.  Then I post it because I am... an idiot? Masochist? Honest? Stupid? All of the former?

Well, the first step is identifying the problem, no?

I at first named this post, "I am a lemming" but lemmings are so misunderstood.