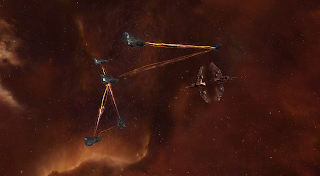 And Diz said, "Let their be Domis!"  and there were Domis.

Diz named it the 'Hospital Fleet'.  It was remote repair Domi's with capaciter transfers and drones for DPS.  With gateguns no longer shooting drones we're playing with them again.

Then a few smaller ships for tackle and webs and we went to town.  Kittens managed to take forever to fit out a Wolf and Mane said I sounded full bitter vet when I asked him if he remembered to fit the rigs he forgot to buy the first time.

So, perhaps, an hour and a half after we had planned to leave we rolled out.  I was not expecting to make it back from the roam.  Not so much that I would explode (that's a possibility) but because I needed to go to bed and I doubted I had the time to get back from where we were headed.  For some reason our fleet chat disintegrated into something that belonged in the sewer mixed with a locker room and locked up, not allowed to ever escape again.

Fried and I managed to kill a Caracal and Rupture that were part of a gatecamp on a high sec gate.  Fried landed in the middle of them and they ignored him.  He was flashy red at a gate in a drake and they ignored him in a Caracal, Curse, Blackbird, Rupture and a Vigilant.  The Cyclone was blue to the alliance.  With no one attacking him, Fried was ordered to kill whatever he could and I was sent to assist him.

Fried started with the Rupture, since he was flashy red.  We had Domi's coming in from high sec and Domi's on the other side of the gate to the system.  We killed him and then took down the Caracal that was hanging around.  The rest of the fleet started to scatter as ren landed in his Maller and I think some of the Domi's appeared.  The cyclone was blue to us and asked to join the roam.  We didn't know him from Adam but decided to give him a chance and had him reship into a cane for heavier tackle.  It simple enough to kill him if he did something shady.

With the fleet fully assembled we headed out to roam.
At one gate there were 5 Hornet ECM-300s.  I asked if I could get them since they were 10k off.  While I was busy being a good girl and asking the FC for permission, ren and the horrible Kittens ran off and scooped most of them up.  Grr.  Evil creatures.

Then we found a system with a cyno.  The FC allowed all non-domi's to jump in and kill it if they so wished much to our joy. Kittens and I got there first and poof went the cyno.  Then back to the gate where we were headed somewhere looking for a fight. 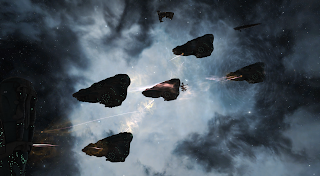 We were going to go and be bait by pretending to gatecamp.  Well, we were actually gatecamping but not gatecamping for kills but gatecamping to be bait but if something killable came through there was no need to restrain ourselves.

"I'm going to jump into high sec and die when I panic," I announced. "That's why you put me on a high sec gate?"

"The object is not for you to jump into high sec."
"So he wants you to die," Fried said.

Fun giggles and we headed off to set up our fake gatecamp bait.  Not much came through and I was getting near ready for bed.  Shuttles, capsules, rifters, nothing came to sniff us.  Bored, the FC called us back and we headed a bit further to see what there was to see.

I did manage to fail jump at one point.  I was getting rather tired.  Diz put me to work as bait but I couldn't shake my money maker well enough it seemed to temp anyone.  The other thing that is new is that Amamke is seven jumps closer now due to the new connection gates they put into the Faction Warfare areas.  This makes our roaming life more interesting.

Maraner managed to land 40k off a Tornado and zip in for a tackle.  The Tornado went down as the rest of the subcaps warped in.  Then one of the new destroyers, an Algos landed.  Ren, kittens, Shadan and I tore that apart while another Tornado took potshots are Ren. 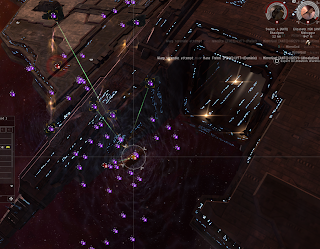 We docked to repair and Maraner picks another station where he manages to undock into a Tornado and goes for it.  So, Maraner  points the Tornado, the rest of the non-Domi's warp to him, then they undock a whole host of things, Maraner goes down in fire as the Domi's are in warp to him.

But we are on a station and its going to be station games. They undocked carriers, a Bhaal, and all sorts of stuff.

This had potentual but when they realized they couldn't break the massive repping potato fleet they docked back up.  They undocked with two carriers and some heavy stuff but we just left at that point because it was pointless.  Fried started smacking them they back and I minimized local as the order came to warp off of the station and regroup.  It was a bit past my bedtime and I was sleepy.  With work in the morning I docked up and let the boys to rampage off across space where they lost two Domi's in null, reshipped, and killed a carrier elsewhere.  Good night all around.

Me, I'm sitting in a Rupture in Amamake debating how I'll get home later today.