There is a moment, when your fleet has settled to a location and hunkered down for a fight, when the other fleet warps in where the adrenaline rush hits and the FC says, "Here they come" as your overview flares to life with the enemy fleet and all hell breaks lose as spaceships start to fight.

Titus invited us to 7-2's CheapHac (Cheap Heavy Armor Cruiser)doctrine. Tonight is the night for T1 cruisers to go out to find a fight.  Due to the inexpense of the ships, throwing them at anything and errything creates interesting situations.  The boys and I jump cloned down.  Ships had to be refit and things adjusted a little bit.  It went well though and Diz and Ren were almost to us as a Broken Toys fleet entered the system and the undock command was called by the FC.

Armor fleet chases armor fleet.  We had Throax x4, Rupture x3, Omen x2, Augoror x4, Celestis.  We found the system that they were in but they were in a safe or a POS.  The call was made to just jump in, and warp to a planet and see what happened. 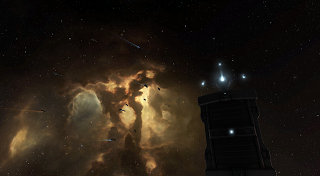 What came on grid was Armageddon x8, SFI x2, Tempest x2, Devoter, Oneiros, Guardian x2, and then later a Hurricane. 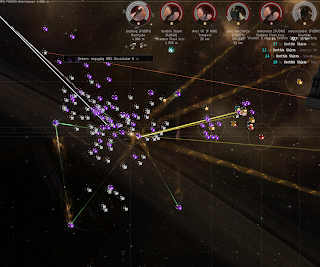 Drone out and we started to brawl.  Both sides were doing an excellent job of keeping their people alive.  We were trying to switch tactics to break tanks.  They are not dying.  We are not dying.  Four minutes in when the Hurricane landed we tore into that and as that went down a Huggin popped a cyno.  "Cyno up!" 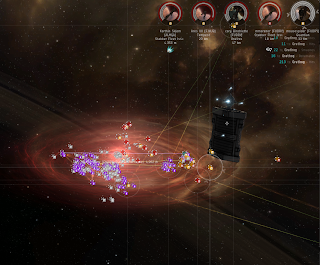 Oh, Hi There, PL!  We stayed on the Stabber Fleet Issue as Pandemic Legion joined the fray.  The stabber went down.  We started to align for the sun as everything went insane. 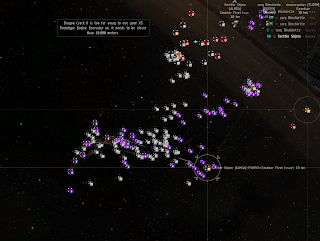 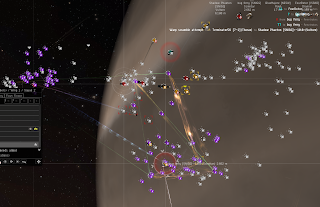 The FC said,  "Lets do this.  I'm taking us in," and on we went to fight PL.  Now it was, Dramiel, Rokh x11, Scimitar x3, Vulture, Lachesis, Hound, Huggin x2.  We went after their Scimitar's and they went after our Arugroror's.  Brawl, brawl, brawl.   Pick at the Dramiel every time he came in range.  We kept almost killing things and having the reps pull it back. We broke one Scimitar and started to chew through the  second.  Then they started picking off our logistics.  Once two were down our reps started to fail.  When the third went down we were told to bail. 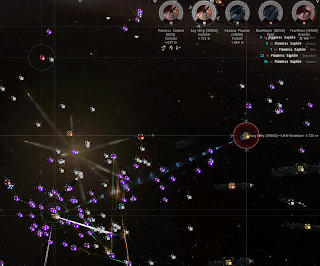 That side of the fight went on for seven minutes before we pulled the rest of our fleet out.  A crazy, insane fight that was.  We started bleeding our cruisers as our logis went down. Ren went down as we were trying to bail.  We figured out that there seemed to only be one person pointed.  The decision was made and the fleet left the field.

The battle report is broken up between 7-2 and THC2.  They discussed what we should have done.  Our coordination with the neuts/damps/dps could have been better.  We almost had that second Scimitar.  If we had been able to take it out we would have stood a better chance to do a bit more damage before we left.

I found that I often had a spare lock open.  I used it t try to nab the faster ships as they spun in and out.  There was a lot of stopping and switching and such things.  It was a very different type of fight.  We got back to the station.  PL jumped in.  Then -A- (I think) jumped in and PL and -A- went at it in local.  Then -A- left and managed to grab Ren who was coming back to meet us when he jumped into them.  Damn. 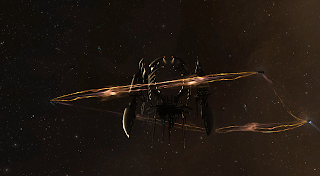 The rest of the fleet did a quick toe dip into nullsec.  We found a Tornado fleet 100k off of a gate.  Our Loki probed them, and managed to warp to 0.  Somehow, he then managed to get back out.  To distract them, the fleet jumped in, they warped out, it was a mess.  No one managed to die on either side.  We turned around and left.  As we jumped a bomber fleet decloaked and tried to bomb us.  To bad.  So sad.  We were out.  Back at the ranch we were greeted by PL with Scimitar x4, Stiletto, Rokh x15, Vulture, Lach x2, Huggin, SFI, Scythe, Harpy, Dramiel on the station.  They were willing for round two with our cruisers.

Diz and I switched into fast frigates.  I had a Stiletto an gave him my fast Jag that I had in the station.  7-2 provided the insta warp off the station.  PL had docked however.  Diz and I cruised off to MH.  I was busy admiring the pictures I had taken of the fight when I heard that Ren tackled a Maelstrom and to undock and go help.

I did, Diz did.  It should have gone better then it did.  But it didn't.  The Mael, I guess, wound up being duel extra large ancillary shield booster fit and not an idiot.  I was trying to bump him off the gate as ordered.  My shields were down and he neuted me dry.  I tried to crawl away and just made it out of point range and hit warp the gateguns reengaged me and chewed away the last of my structure and the drones finished me off.  Pop.

Then I warped off and all hell broke Lose, Diz went for a bump, got caught by the Mael and lost his Machariel.  Mistakes were made.  Ships were lost.  In that type of situation my Hurricane is a disposable ship on the field.  Losing Diz's Mach is just unpleasant   The what if's just fill your head.  If I had warped off and warped back sooner.  If I had done something better.  If... if... if...  The ships left just couldn't break him before he deaggressed, kept repping like a beast, and jumped out.  We tried to set a trap for him but he gave a , "6am, good night," and logged off.

The boys decided to go back out in an armor T1 fleet.  I decided that I was pretty full for the evening and worn out.  As I finished writing this the boys had taken down a Typhoon and Kittens was cheering because the gategun gods didn't smite his Wolf.  And people say there is no fighting in low sec.

It gets giddy, PvP.  You can drown in it, saturated in the ebb and flow of the energy.  Its hard for me to remember that not everyone experiences these situations.  That for some, these things may never happen.  To not experience these ups and downs, the intensity of the actual moments and the bone deep exhaustion after a drawn out battle must make it easier for some to discount PvP in Eve.  This won't happen every time.  It only makes each time that much more intense.  Its like inhaling the rich scent of the sweetest rose while savoring the flavors of the best steak.  Its a rich and heady combination and its an addictive drug that drags people back into space, into fleet, and out to find the fight.  Its what helps us over come our loss, sooth our sounds, and satiate our appetites for spaceship destruction.