Can a New Player Enjoy Eve?

Are you, or one of your friends thinking about playing Eve?  Do you wonder if people like it?  (the answer is yes, by the way.  Consider that a spoiler).

As Retribution comes out and CCP seeks to lure new players to Eve I figured now was a good time for one of those, "To play or not to play. That is the question," type of posts.

Play it.  Eve is beautiful. 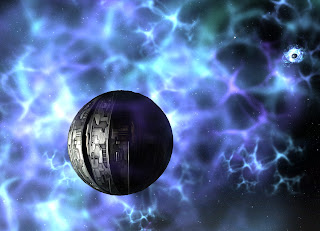 It's a game where you can just soak up the universe.


I was rummaging around on the steam forums.  Steam currently has a $5 to start playing offer.  This is cheap enough that it often brings new players into the game to give it a try.  As an Eve player, the negative opinions that people have about Eve often amuse me.  They are many times formed from a lack of knowledge or a bad situation.  With most games focused on feeding the positive reinforcement the negative reinforcement that many Eve players thrive on is abhorrent to some.  I can see it all over the forums.  Eve was hard for people so they give it negative reviews.

Yet, that is not the barrier that I read about the most.  Until they experience Eve, the rumors of loss and the finical impacts that the player base takes in stride are not fully understood.  What most people focus on is the age of the game.  Eve is 9 years old and it does not have a 'max level'.  Can a new player catch up?

The answer is yes.  The reason is because Eve is not a game of levels.  The concept of levels means that there is a cap. With obsession and a lack of solid food and bathing one can gain those top levels at an incredible rate.  But Eve has stripped that away, stomped on its head and laughed.

It is a game of skill points that you do not need any actual skill to gain.  What you can do and how well you can do it matter.  The is an initial time dump but that time dump is in any game.  What scares people about Eve is that you can never catch up to someone in time.  People compare this against their experiences in other games and come up with the incorrect summary that they can not succeed in Eve unless they started playing it nine years ago. 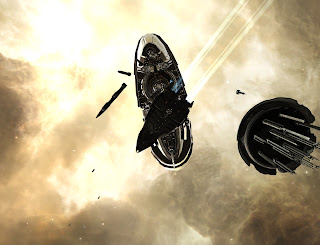 No.  No because Eve does not have levels it has skill points.  Also, because you do not need to do anything to learn skills the only thing left to learn is player skill.  Playing the actual game, the task of it, is what can become so consuming and take so long to learn.

But skill points are levels, no?  Each skill has a level of 1-5.  Each of those takes a period of time to learn.  So if you are level 5 and I am level 1 then you are better.

To a point, sure.  But that is a tainted view.  Eve's skill point progression is permanent   Once the time is done the skill is given and it is the same as anyone else with that skill.  If someone has Gunnery Rank V and you have Gunnery Rank V then your Gunnery is the same level even if they are 9 years old and you 2 weeks old.

It is never that simple.  There are tons of support skills and all sorts of delightful complex things to keep us occupied.  However, their Gunnery skill stops at V.  They don't get Gunnery VI or VII.  Their Gunnery V is not any more powerful then your Gunnery V because it is older.

What must be pointed out, regularly is that once a skill is achieved it is achieved and the length of time in game does not matter.  Similarly, each module and ship and task has a set of skills related to it that are static. If these skills are all achieved then they are the same.  The most common example is for frigates. 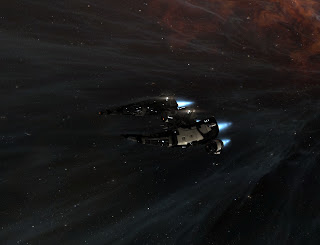 Frigates are the smallest ship class that a player has to specialize into.  Because they are small they are considered an 'easy' train.  Easy trains in Eve generally mean short amounts of time.  A 2-3 month train to get into a frigate that can compete with the veteran players at the same skill level.  While it may sound like a lot of time Eve is not an overly fast game and it is one of planning.  While 2-3 months may sound unpleasant I lay it on the table to point out the fact that it is accomplished in 2-3 months not 9 years to reach the level of an experienced player in a situation.  If that is still too long then instead of saying, "Eve is not for you," I'd still suggest a person try it.

What time in game gives players is access to more options.  Or, I should say, useful access to more options.  A new player can get into most Battleships and below in just over a week.  It would be a terrible thing to have happen and they would not have any decent skills to fly the ships but it is doable.  But playing Eve is a matter of strategy and far thinking.  Perhaps it is the space ships and lasers that confuse people some. 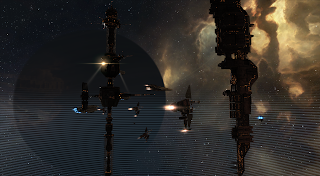 And the trailers are romantic.  Action and adventure await.  Yet many people descend into a life of mining and spread sheets while we sit over our morning coffee looking at the finical charts at the trade hubs.  I'll be honest about that.  Yet, its amazing how relaxing it is and how one will find themselves three hours past their bed time passionately work out the most effective way to build a fleet of spaceships.  Then said fleet of spaceships is taken out and thrown into massive battles full of carnage and destruction.  It just takes a bit of planning.

But is Eve casual?  I lean on the side of, "No" but in truth it can be.  That is the fun part about the sandbox.  Someone can jump in and jump out of the game.  The game does not penalize you.  However, I would caution anyone that wanted to play that the social nature of Eve is what consumes most of us in the end.  Eve is a social game.  That is where it excels.  The game is not structured around a single player and it fails, considerably on that level because it is not meant for that one.

Eve is better with people.  There are plenty of people out there to help a new player along.  Thanks to the fact that we are rewarded for corporations, under all of the darkness and evil the scams and the explosions there is a group of people who understand the value of 'paying it forward' and bringing people into the game. A new player can find themselves drowning in a ocean of help far deeper then the initial one of confusion.

That is the key to all of this.  To picking up Eve as it approaches its tenth birthday.  It is about the people and it is built upon a system of corporation.  You don't have to go at it alone.  Go at it with other people and things like skill point differences will evaporate as you enjoy the hell out of yourself.

For people debating trying Eve, why not?  Try it.  Meet some people.  Do some stuff.

Stop by and say hello.

[Brought to you by my browsing the Eve Steam Forums.  I also just wanted to put in that kick ass picture I took today at the top of the blog.]
December 06, 2012