And There Be Dragons

Low Sec and Null Sec are not High Sec.

You don't just stumble into them.  You don't start in them.  You are warned the first time you jump into them.  It is personal choice to click the warning off or not.  And the warning will come back every time.  You have to click a box that says, "Don't show me this again.  I'm an adult." 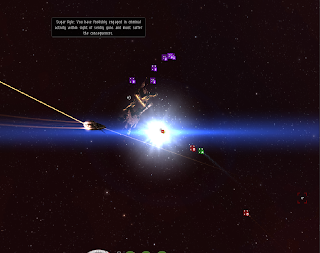 People don't often read that box.  They click past it and then later, die in shock.  I read the warning the first time I jumped into low sec three times.  I then read it every time I jumped in for the next two months before I turned it off.  That was a big day for me.  The day that I clicked the little box not to see the popup anymore.

You can die in high sec.  People die all the time.  Ganks happen.  I noticed the other day that I had a random unskilled alt ganked two weeks ago when I logged her in.  I think I got distracted and left her logged on in space and someone popped her pod.  I hope they amused themselves.  It was somewhere in high sec.

Losing stuff sucks.  Most of us will experience loss at some point.  I'm a fan of losing things early.  It prepares you from later.  When I meet a one and two year old character who have not lost a ship since the rookie missions, I often can see a potential rage quit in the future when they do lose something.

And while that may work for them, they were also telling me about how much PvP they did. Loss happens.  It is such a part of Eve.  Yet, sometimes, it seems that people can not wrap themselves around the concept.  Its an eaten chocolate bar. Its gone. Eve is about consumption.  And then there are times when you put yourself into a position that you can't complain about.

Player 1: "Eve just sux. Cant take it anymore."
Player 2: "can i have your stuff?"
Player 1: "i have no stuff"
Player 3: "what happened?"
Player 1: "drag bubble. gayest thing ive ever seen. "
Player 4: "ur quitting eve.....cause u got bubbled"
Player 1: "drag bubble and a loki . spend so much isk on ships that cant make the isk back only to lose it to pvp'ers. so its pvp or gtfo really. and pvp is broken so im out later guys."

(Grammer left as is)

The only place in the game that drag bubbles (warp disruption spheres) can be used is null sec.  Null sec is not a place where you are shocked when you are dragged into a bubble and killed by something.  That is part of the null sec experience   It is not as if you leapt out of a newbie system on your first mission from Aura to get your spaceship, got dragged into a bubble and killed by someone.

And the player was not new.  He was back from an extended break, but he was not what anyone would define as a newbie.  I looked up his loss.  He was in a Crane. An empty Crane.  A Crane is a blockade runner aka a cloaky hauler.  He also lost his pod as well.  His total loss was around 250 mil.

Its not a fun loss by any means.  Yet, when flying through null, its expected.  He could have scouted himself.  Since it was a drag bubble he should have seen it on dscan and attempted to bounce off a planet or moon.  Perhaps, he did those things and still lost out.  Such is the game.

Why is PvP broken?  I didn't get a chance to ask him.  I'm curious if it is because he couldn't avoid the situation he was in.  Sometimes, people think that having options means one choice will be the choice you want to happen.  The choices may all be bad.

Or is PvP broken because it can not be avoided?  As someone who spends half of my time in noncombat ships, I know how fustrating it can be to be helpless.  Yet, I put myself in that position.  I have a choice not to. I even have other options (such as hiring Red Frog).

It, however is not PvP or Get Out.  It never has been.  It is accept the PvP in the environment or Get Out. While the two may feel very similar they are quite different.  A player does not have to PvP.  They, however, can not stop PvP from affecting them.  Opting out takes some effort but I've seen plenty of people do it.  They still may not succeed in their choice.  Just because the options are there does not mean that one will always achieve them.

I guess I have a lot of belief in the consequences of decision making.
December 22, 2012