Tears.  They fuel spaceships.  Sometimes they are so concentrated that a handful from one person can fuel a thousand ships.

I belive that the patch notes and Dev blogs are mandatory reading.  Even if someone does not want to read blogs and newssites and reviews and artciles and forums they should read the patch notes and the developers blogs for the game that they are playing.  I can understand in the first few days but when someone has played for months or years...

I may be too seeped in Eve information.  The only things that I found shocking about the patch where the things that popped in at the last minute (DED 1/10 and 2/10 removal on which we have still not yet heard back from CCP) or things which were not announced.  For the most part there have been few of these problems and it has been more a matter of catching up and figuring out processes.

The talks about the patch have been ongoing for months.  We learned what it was called back in September at the London meet.  The changes have been gone over, tested, reassessed, argued upon, agreed upon, hated, loved, cried over and raged about for months and months.

Yet, the moment Retribution hit the game the floodgates opened.

I don't have enough buckets to harvest all of this.

People do not read the patch notes.  At all.  I watched someone ranting and raving in one chat room about the new changes.

From the person that ranted "High Security space should be just that ...High Security ..all other space ...Go For It" over bounties to the one that said "Bounties should not be allowed to be active in hi-sec space! IE -0.5 in order to claim" the general air has been filled with people not paying attention.

This was my favorite.

Oblivious player "Nothing screamed "UPDATE" at me. I play this game casually and do not care much for reading every little patch note detail about the games update. I just like to log in and do missions. Get over yourself please."

The below picture is the response made by the person that he pointed out that the Patch notes were clearly marked. 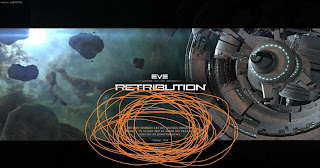 There are gankbear tears over the removal of neutral logistics.  People who stand up and say, an I think they are actually serious, that Neutral Logistics that could instantly dock and help out people ganking carebears in high sec were very sensible   While the original poster of the thread is a special type of insane it does not diminish the delicious fine vintage of his tears.

The mission runners are upset.  I'm not surprised.  A huge issues are the aggression to drones.  Having done my normal group in sites I can say that the ship to ship aggression is also irritating.  My origional complaint was on many of these topics and I was, for the most part, shot down and told that the AI changes would be fun and exciting and bring back spice to mission runners.  What was expected to happen is happening and people are horrified.  Surprise!

From the unhappy people posting all over the Eve Mission Forums that doesn't seem to be the case.  And then there are those that are telling them to get over themselves.

My favorite is the bounty hatred.  The changes allow bounties to be placed on everyone.  If you right click someones name the 'place bounty' is an option.  People are slapping bounties all over every one and everything that they can.  I find that the wanted sign is a bit to large myself. I think it should be about half its current height.

But the tears the bounties are causing.  People, again, have not read patch notes or Dev blogs.  The first few hours after the game was back up was mass carnage.  People found out that they could be podded with suspect flags.  They thought that they could shoot people that they could not and lots of people assumed that bounties equaled kill on sight rights.

And those that are horrified that their kill rights are up to the public.  Oh noes!  I did something and now something can happen to me!

I'm somewhere between amusement and rolling my eyes.  Its been interesting.


With all the raving about sound I decided to put my head set on and listen for a bit.  I remembered that I used to love Eve with sound.  I started to turn it off because of voice coms.  Of late, I almost never speak on voice coms so the only thing stopping me was the fact that I didn't want to wear my headset.  I don't like things over my ears.

I decided to get over myself and give it a try.  I've noticed a few visual changes that I didn't expect.  One is that my probes look a bit different.  The blue is more grid like.  I like it but I stare at this screen enough to notice an immediate difference. 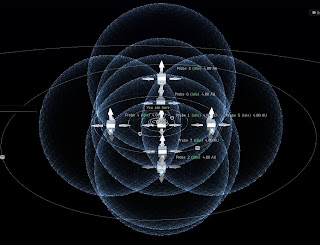 It is nice.  The music is different but not bad.  The new explosions are interesting.  The AI changes are irritating but I prepared for them. I haven't done anything overly hard yet.  Right now I'm just letting myself drift back into things and slowly work my way up.  I didn't bring my Legion on vacation with me because my scout had to stop training her legion skills to top off destroyers and battlecruisers.

The NCPs hate the logistics.  As soon as Chella lands on grid and starts repping everything tries to kill her.  It turns into a game of the logistics character kiting everything and nothing trying to harm anyone else.  Way to go to encourage people to play a ship class that does not even have weapons. I'm not going to waste my time losing my drones right now.

I did score a Micro Jump Drive which I built and sold.  The market is insane right now and people are willing to spend a lot to access the new toys right now.  I would like to thank the people who purchased them for 50 million ISK.  The things cost almost nothing to make and took 25 minutes for the three to be produced.  It will be interesting to see how fast they decrease in price. 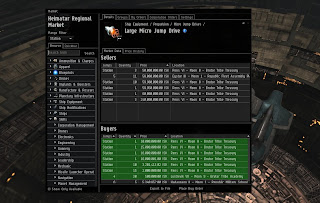