One of the first things I discovered in Eve was that you could name your ships. I cheerfully randomly started to name them all sorts of things, normally related to the shape of the ship.

Naming my ships also helped me keep them organized. Chella is gallente so I started out with all the horrifically ugly gallente frigates. They wound up with random names like Omlette (Navitas), Digger (Imicus) and Strawberry (Atron).

Eventually my entire ship line moved to food selections and I became more and more creative. Chocolate was my Itty III (and still is) and Lemon Torte' is one of my Noctis. The other is named Dark Chocolate Fondue.

Soon I started to separate ships by their food type. My shield rifters are all skittles (lemon skittles, lime skittles, grape skittles). My armor rifters became starburst flavors. My ruptures broke the mold and were named glitter colors. Pink Glitter was one of my favorite ruptures, lived for 3 months through numerous engagements and made many people go, "WTF? Pink Glitter?!" I happen to hate the color pink but it was a fantastic name.

My assault frigates became deserts. Salted Caramel is my main Jaguar and Bread Pudding is my Wolf that I barely fly. I also eventually made Cake Batter the Jaguar who has a different fit then Salted Caramel. 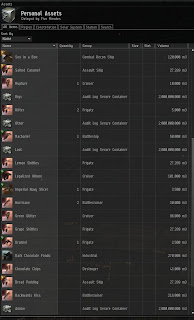 I love naming my ships. Once they are assembled and their future fitting is picked, they are quickly named. Because ships are destroyable to me, each one is its own instance. My Cynabal for instance was built from a BPC that I got doing a 4/10 site with my mentor. All of his ships are named 'Legalize It'. Therefore, I took a spin off of it and used an inside joke and this Cynabal is named Legalized Whore. It will probably be the only one that carries that name.

Ship naming is fun. Its a bit of personalization that I enjoy in Eve. Making someone giggle from reading dscan is endlessly amusing. Due to my proliferation of desert themes, my alliance always knows what ship is mine when I dart through a system. However, hearing someone say, "Rifter Lemon Skittles on scan" is giggle worthy every time.

I never thought of ship names as anything more then personalization until someone said that they had been told that when chased, to change your ship name to confuse the person chasing you.

My answer was, "What? Why would that confuse anyone?"

"How?" Later, I thought that in high sec, where systems often have 20 and 30 and more people or if in a large fleet with numerous bodies in system the tactic could work. But in low sec there is often only one or two other people there. They know that you are in the rifter. Changing your name six times is not going to make them forget that you are in the rifter. Decisions are made by what ships are seen. I don't see confusion because the Rifter was named 'Dark Blade' and is now named 'Slurpee' when it is the only rifter in the system.

Earlier this evening, the topic of ship names came up in a channel. Someone asked, "What is the reason for naming your ship?" my first answer was, "Fun" but someone hd a valid point about free intel and not giving it away. Sugar Kyle's Rifter is a rather obvious name attached to a rifter.

Now, Spice Girl's Rifter attached to a Navy Apoc would not be so obvious. It would be even better if the player's name used was not even in system. So lets say I named my Hurricane, 'Wet Peach's Hurricane'. There is no one named Wet Peach in system. So, we know that there is a hurricane but we do not know who the owner is. If Wet Peach is in system flying a Rifter named 'Taco' then it is easy to assume that the hurricane belongs to Wet Peach when in reality it does not.

The above can be useful when it comes to accessing someones potential skill points and fitting abilities. If Wet Peach is a 2 week old character in a Hurricane, one can almost certainly assume, bar one being a terrible terrible pilot, that the Hurricane is going to pop when breathed on in PvP by an experienced player. However, Wet Peach at 2 weeks old can fit a very good tackle rifter. If Spice Girl is also in system at 6 months old, she is old enough at six months to properly fit a Hurricane making it a greater danger then Wet Peach would be.

These are the decisions and thoughts that need to be made out there. Or at least, to me they need to be made. Lots of people just jump in and have at it. While I do participate in that, due to my own newness and inherent fragility I spend a lot of time debating what I will do in a situation when I am out solo.

What does not confuse me, however, is when a ship is named Rifter and it is truth a Rupture. This is because on dscan the 'name' is in the first column and the 'type' is in the second. Therefore it would say Rifter in the first column and then Rupture in the second. The second column is the one that matters the most for basic information. This tells me what ship I am looking at, names be damned.

I've read that some wormhole corps use a symbolic naming devised method to help them distinguish their own ships from neutrals. It makes sense. Its not as infaliable as it once was now that we can copy and paste off of dscan.

However, the argument was that naming your ship to another ship type/planet/object will confuse people.

My response was, "How?" and then I added, "If someone makes that mistake then its their own fault."

I was told that, "People are busy and hit dscan to check qucikly."

"The ship type is its own column. How is someone letting the name and type confuse them? They don't change position." 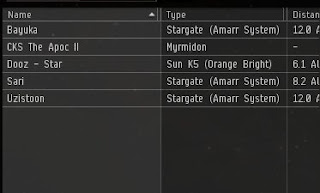 In the above image of dscan, that is a Myrmidon. It will also be a Myrmidon when I can see it on dscan. If it was named Catalyst, it'd still be a Myrmidon in the second column.

Therefor, I said if someone is mistaking things based off of its name, it is their personal bad habit or failure to pay attention. Neither of those things makes it a good tactics or a confusing tactic.

"People get busy," I was told. "Unless someone is dedicated to dscan, mistakes happen."

"I agree. Mistakes do happen. However, that does not releave someone the burden of accepting the fact that they fucked up. It does not make deciphering between ship type and ship name hard. It does not make it tricky. One simply scans the type field as the primary place to look.

Or at least, that is how I handle it. The first few times I was a bit puzzled. It had not occurred to me to name my ships anything other then what I wanted to name them. Naming them Amarr Small Tower or Cargo Container was not something I had ever thought about. I figured that those people were boring.

Now I know it is a type of strategy. One, that confuses me as to its effectiveness. Unless effectivity is measured by those that do not pay attention. Yet, I'd think one would wish to measure with a rate of those that are on the ball and ready to cause that 'spolion, erryday.