It seems that self destruct is now giving killmails. Last night, I discussed this with someone and they siad that it was showing up on the test server. I was going to log in and play with it today, but I may have had my question answered for me already.

Now, I was flipping through the super kills at the top of eve-kill.net's site and found this nyx kill where they confirm that he was in structure and self destructed but still generated a killmail.

Word from the comments is that the killmails are malformed and a bit broken but being generated nonetheless.

I personally hail this as a good thing. It will be interesting to find out how this affects the use of capital ships. Without self destruct not creating a killmail a ship is committed or it is not. Is the aversion to public capital ship loss so great that people will stop fielding them? Or will fights improve now that capital ship pilots have no reason to press self destruct and go down when they are still in shields or just touching armor?

Will more people want to field capital ships now? I've heard noise that some alliances demand capital pilots to self destruct and refusing can have you removed from the alliance. How many people would field capitals if they did not have those restrictions attached to them?

How many people mind losing their ships on a personal level?

I know that I am personally terrible about getting off the field unless I am told to. I've fought with self preservation desires more then once in battle because I was not sure if I should stay or get off the field. I'm still often not sure. I don't want to go down if I do not need to go down but I also do not want to bail on my people. Its something that is situation and will take more time and confrontations and later, breakdowns to find the answer to. 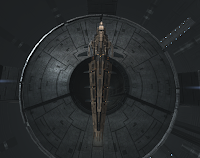 I've learned about sacrifice to get other ships off grid. I fly low value ships in the big picture and I am normally one of the lesser skilled pilots on grid. I don't mind throwing myself into those situations but I also don't want to run just because I may go down.

I figure I'll figure it out eventually.

Without ship loss there is no need for ships to be built. With ships not built there is no reason to have modules on them. Without either of these things we don't need the materials that go into producing ships. We don't need the ammo to fill the guns and the drones to fill the bays. There would be a dramatic reduction of loss that would ripple across the game like a tsunami and leave a shattered wake in its path.

I'm not even going to think about what it would do to the value of ISK.

Mission runners may explode, but not on the level of wars and combat.

Ships must die for Eve to continue to function. I can only hope that this change will bring forward more ships to transcend into glory. May the map burn.